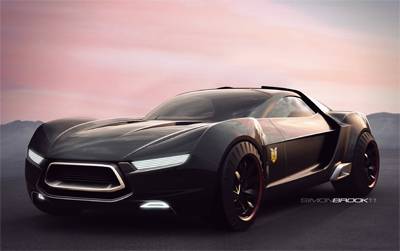 The 21st century concepts have been designed by Ford's designers for TopGear Magazine Australia to help celebrate the revival of the Mad Max action movie genre.

Ford Australia's Melbourne-based Asia, Pacific and Australia Design Director, Chris Svensson, jumped at the chance to design a new Interceptor and has since thrown the full weight of Ford Australia's Research Centre behind the project, with stunning results.

"Our entire team was very excited to be involved in this after-hours project and they approached it with a great deal of enthusiasm - even those that were too young to remember the first Mad Max movie," Svensson said. "We had a special screening of the original movie so they could understand it."

Out of the concepts two have been chosen by the magazine to feature in the April issue of TopGear Australia magazine, on sale now, because they take body design, power sources and weaponry to a futuristic level.

TopGear Australia magazine readers will be invited to vote on which design Ford should take to the next level.

The winning car will be turned into a clay model, and then a scale version, which is expected to be revealed later this year.

The two competing designs - by designers Nima Nourian and Simon Brook - are limitless in their imagination, technology and weaponry. Among the weaponry is an industrial-strength "taser" mounted to the bonnet to zap bad guys on bikes straight off the road.

Other futuristic movie features include a titanium-lined body shell to interrupt police scanners and wheels with extendable spikes to shred enemy vehicles.

Nourian said his design paid tribute to the 1970s Interceptor, but also drags the car into the future. 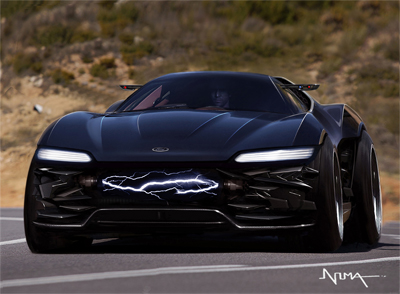 "There are some great scenes in the first movie with high-speed chases and clashes with the bad guys, and I thought I'd take that one step further," he said. "So instead of having weapons and machine guns, we've got an industrial strength taser that'll zap cars dead and out of the way.

Brook's car was equally threatening. "During high-speed pursuits, the wheel's inner spokes on my design would pop out and start ripping up other cars," Brook said. "They'd do some serious damage to other people's vehicles."

Brook's design takes cues from the current FG Falcon but advances it further into Armageddon-land, while adding touches of the retro Interceptor as well. "I wanted to keep it clean and aerodynamic in its essence, but still brutal and tough."