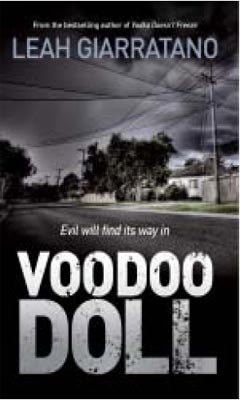 Evil will find its way in...

So, are you a psychopath? Turn over to find out!

VOODOO DOLL is the thrilling follow up to Leah Giarratano's break out bestselling debut, VODKA DOESN'T FREEZE, released last year. In VOODOO DOLL Leah takes us into the minds of sexual and violent offenders, drawing on her vast experience as a psychologist specialising in psychological trauma and psychopathy.

Leah has had many years experience assessing psychopaths and treating their victims. She has worked in psychiatric hospitals, with the defence force, and in the corrections system with offenders who suffer severe personality disorders.

She has assessed and treated survivors of just about every imaginable psychological trauma, including hostages; war veterans; rape, assault, and accident victims; and has worked with police, fire and ambulance officers.

VOODOO DOLL, Leah's second novel following VODKA DOESN'T FREEZE, sees the return of Sergeant Jill Jackson, who has been promoted and is stronger than she's been in years. But with the promotion comes a transfer to a taskforce targeting gang-related home invasions in south western Sydney, a new partner, a whole new team to work with, and some of the grisliest cases Jill's ever encountered.

The gang is believed to be responsible for at least five brutal home invasions over the past two months, with the most recent culminating in a vicious machete attack that has left one of the victims crippled. When the violence escalates to murder, suddenly Jill and the team find themselves hunting a psychopath, and delving into the pasts of victims and witnesses in a race against time to uncover what links them to the killer...

In the forensic and behavioural sciences, Robert D Hare's Psychopathy Checklist is a psycho-diagnostic tool often used to assess Psychopathy.

For each characteristic that is listed, the subject is given a score: 0 for "no," 1 for "somewhat," and 2 for "definitely does apply." (Please note that Dr. Hare does not advise that the layman use this checklist for "diagnosing" friends and family; this checklist, however, does give you a good idea how it is used).

Several of my clients have been traumatised by home invasions. There havebeen a few such gangs committing these over recent years, some surroundingthe area in which I live. I imagined myself being at home, asleep, and thenopening my eyes to the ultimate nightmare - masked men in my house.


2. Have you always wanted to be a writer?

I've always wanted to be a psychologist, but I also always saw myself one daywriting a book. What was the turning point that cemented your decision? I wasjust completing my doctoral studies in clinical psychology and one of myplacements was in a maximum security prison, assessing men with severepersonality disorders. When the placement was over I found I had too manyhorrible stories in my head, and I had to spew some of them out. That's whenI wrote my first crime novel, Vodka Doesn't Freeze.


3. What type or books (or authors) do you like to read when you are notwriting yourself?

I go through phases. Sometimes I read crime, and at other times I can't bearit (see enough in my 'day' job). Sometimes I read fantasy. And when I'mreally tired, it's cooking magazines, trash mags or I zone out in front ofthe telly.


4. How lengthy is the process behind writing a novel?

Well, I find I can write the novel quite quickly, but given that I only haveweekends because I'm also busy with psychology, it takes me about ninemonths. Then the editing process begins with the publishers to polish it up.


5. What is your favourite part of being a writer?

Snuggling down in my bed with my laptop and my cats and diving into one of mycharacter's minds. When I emerge again, it's as though I've been on holiday.


Quick Questions:
Full Name: Dr Leah Giarratano
Star Sign: Aquarian
Book Category: Crime/ psychological thriller
Favourite Food: Cherries
Favourite Film: I'll choose a TV series: The Sopranos
Favourite Actor: Matt Damon
Pet: blue and lilac point Siamese cats (button and mouse)
Describe yourself in 3 words: much too complex
Person You Would Most Like to Meet: Bob Marley
Hobbies/Interests: yoga, cooking
First Job: deli hand
What Can You Never Leave Home Without: my credit card
What is the first thing you think of when you wake up in the morning:"Please, Button [my boy cat], get off my face"