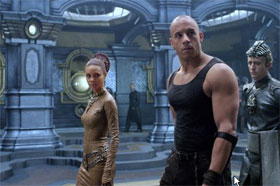 THE CHRONICLES OF DIESEL.
Vin Diesel/The Chronicles of Riddick Interview by Paul Fischer in LosAngeles.

Vin Diesel arrives at the end of a long day of interviews looking as if he had been literally hit by a truck. Collapsing on the floor, he apologises in advance if he appears somewhat drunk. Whatever one's opinion of Diesel, and opinions certainly do vary, it is easy enough to be smitten by the man'sease of charm, and vibrant sense of humour. Weaning a bold, shiny blue shirt with painted elephants emblazoned on it in all their glory and an elephant bracelet [the purpose of which becomes clarified as we speak], one is trying to ascertain what repetitive questions not to ask, given his look of anguish at the end of the day. "At some press junkets, you get questions that youdon't want to be asked, but for some reason, at this press junket, I have been asked wonderful, incredible, intelligent, insightful questions." Perhaps that will change, we both agree laughingly, as we sit around about to begin to add insight into his latest film, The Chronicles of Riddick.

Vin Diesel is that rare breed of Hollywood star, one that tries not to take himself too seriously as a star, but as an actor, well that is a horse of an entirely different colour. This is a man who was brought up on a world of fantasy, and, like a grown-up child, sparkles at the very mention of one ofhis primary influences: Dungeons and Dragons. Or perhaps, one questions, it was just a rumour that Dungeons has spoken to the child within for some two decades. He rolls back on his chair and merely smiles. "I never play D&D,"he begins with mock seriousness. "For some reason, they thought that Iplayed D&D for 20 years. They thought that I spent years playing Barbarians,Witchunters the Arcanum. They thought I still played D&D back in the '70swhen it's just the basic D&D set. They thought I continued to play D&D whenit became Advanced Dungeons and Dragons. They thought I played D&D whenthere were only three books - the Player's Handbook, and the DM's Guide.They thought I played D&D as it continued onto the Unearthed Arcanum,Oriental Adventures, Sea Adventures, and Wilderness Adventures. They thoughtI played D&D at the time when Deities and Demigods was the brand new book.They thought I played D&D when I used to get up to a place called TheComplete Strategist in New York." We get the point as he smilingly mouths:I'm into D&D a lot. "It was a training ground for a lot of my adventures."

These adventures initiated as childhood games, but have since morphed intothe world of Riddick, about to unfold in a movie multiplex near you, or "theconcept of creating a world of neutrality." Before Hollywood set aboutcreating Vin Diesel and his unique persona, Diesel was on his way eitherSaving Private Ryan or entering the futuristic world of Pitch Black. Dieselknew, after playing Riddick in the latter, that he would eventually re-visitthat character. Why? "'Cause he's the coolest fucking character I've evercome across," Diesel laughingly enthuses.

Cool, he says, because "he's the quintessential antihero and we all know howmuch I love antiheroes. It takes you 45 minutes in the movie just forRiddick to understand the word 'heroism', let alone for anyone to hope thathe can be heroic. That's cool and real, so you can invest in this guy'sspiritual growth. He's a guy that embraces that indifference and doesn'tcare what anybody thinks about it, who wants to be left alone." This is alsoa character with whom Diesel can identify. "I relate to his defiance. Youknow it's no secret that I had a problem with authority." The loner aspectof Riddick comes across in Diesel, rarely seen in public with a partner, forinstance, arriving solo to the premieres of his films. "If it were up to me,I wouldn't even go and no one would even see me before the movie, because Iwant you to enjoy the experience and for you to buy into the character asmuch as possible. I don't want to bring any of my personal stuff and crowdanyone's mind before they sit down and get into the experience. I feel likeit would only cheat so I've tried to stay away from that."

Perhaps for that reason, Diesel has managed to deflect the public away fromhis personal life. It's all about the work and the actor remains aself-admitted workaholic. Yet, despite recent failures at the box officepost-XXX, Diesel denies any pressure to turn the potential Riddick franchiseinto a major success. He produced the movie and fulfilled a personalambition. Anything else is pure gravy. "For some reason, I was more nervouslast night [at the premiere] than I have ever been at any premiere, becauseit was something that I had been working on for five years that is so close,been such a labour of love and that made me anxious for some reason. Havingsaid that, the second I finished my first day of shooting with Judi Dench, Iwon, because I had accomplished a real goal. The second the studio green litthis epic that didn't spawn from a book or hadn't been in existence for 50years, or didn't come from a comic book character, I was satisfied."

From the earliest moments I first met Diesel, back when he was shootingPitch Black in Australia, there was always a sense of passionate ambitionwithin himl. He had written and directed his short film Multi Facial, whichled him to Spielberg and Saving Private Ryan. Reflecting on his journey fromMulti Facial to Riddick, Diesel is quietly reflective. "I started acting atseven years old but it took me 20 years to understand that if I was going tomake my dreams a reality. I had to take the reign and learn something aboutbeing productive and self-sufficient. I had to be productive at all costsand I HAD to make product, because I was going around, telling everyone Iwas an actor and unless you were coming to a theatrical play I was in, youwould never know."

He says "it's debatable" that the man sitting in this Beverly Hills hotelroom is all that different to the man that made Multi Facial. Yet at thetime of XXX, Hollywood was preparing to build Diesel and turn him into thenext Hollywood superstar. One recalls throughout that press junket, hownervous and apprehensive Diesel was about impending fame. These days, he ismore circumspect on that subject. "It's a double edged sword, in that themore successful your film is, the more famous you become. We all think offame as being great. The wonderful thing about it is the bankability thatcomes with it, the ability to do things like The Chronicles of Riddick andto tell somebody: 'Hey, man, there's this cool idea, that can incorporateall these fantasy and sci-fi elements' The tricky part is that your privatelife is that much more threatened." So to deal with that threat, Diesel hasalways immersed himself into his work. "Every time you've talked to me, I'malways talking about some project I want to do. You remember years ago whenyou sat down and talked to me, I was talking about The Chronicles ofRiddick.? Before Universal knew The Chronicles of Riddick, you knew I wastalking about it."

Diesel still yearns to star in a remake of the musical Guys and Dolls, andelephant bracelet that he is wearing relates, of course, to the actor'sother pet project: Hannibal, which he has also been talking about in severalpress junkets. "David Franzoni, who has written Gladiator and Amistad, hashanded in an incredible script and Sylvaine Dupris, who is Ridley Scott'sstoryboard artist and storyboarded Gladiator, has been working with me forthe last month." And with the recent success of Passion of the Christ,Diesel hopes to shoot a "multi-lingual version of Hannibal the Conqueror."

When, one finally asks, does Diesel have time for a life. "That's a goodquestion," he concludes smilingly.

THE CHRONICLES OF RIDDICK OPENS IN JULY.