Viggo Mortensen Lord of the Rings - More Horsing Around 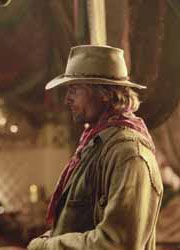 It has been quite the year - or rather years - for 45-year old Viggo Mortensen. The quietly-spoken silver-haired actor loves nothing more to push himself to the limit. Whether he is riding into battle in the epic Lord of the Rings trilogy, or riding ferociously across the Moroccan desert in the adventure Hidalgo, Mortensen does it all with little help from stuntmen. Serious minded and quietly introspective, Mortensen is a different fellow from the image he recently personified on screen. Yet the actor is circumspect when asked why he went from the physically lengthy and tough Rings trilogy to another tough stint on horseback. "I've been around for a long time and have been working ... on and off for 20-odd years. It is true that as different as [Hidalgo] is and as [director] Joe Johnson is from Peter Jackson, Joe's straight-ahead old-fashioned approach is refreshing," Mortensen explains. "Those are the kinds of movies that I sometimes go to see, but they can also be small movies. I think one of the best movies I saw last year was Whale Rider which is also a heroic journey. I took it as much more intimate and it's a smaller story in some sense, but it's as much of an epic journey with mythological underpinnings, as well as being moving and takes you on a journey as an audience just as much as Hidalgo."

Based on the true story of the greatest long-distance horse race ever run, "Hidalgo" is an epic action-adventure and one man's journey of personal redemption set in the late nineteenth century at the time of Buffalo Bill and the massacre at Wounded Knee. Held annually for centuries, the Ocean of Fire - a 3,000 mile survival race across the Arabian Desert - was a challenge restricted to the finest Arabian horses ever bred, the purest and noblest lines, owned by the greatest royal families. In 1890, a wealthy Sheik invited an American and his horse to enter the race for the first time. Real-life Frank T. Hopkins (Mortensen) was a cowboy and dispatch rider for the US cavalry who had once been billed as the greatest rider the West had ever known. The Sheik (Omar Sharif) would put this claim to the test, pitting the American cowboy and his mustang, Hidalgo, against the world's greatest Arabian horses and Bedouin riders-some of whom were determined to prevent the foreigner from finishing the race. For Frank, the Ocean of Fire becomes not only a matter of pride and honour, but a race for his very survival as he and his horse, Hidalgo, attempt the impossible. For actor Mortensen, the real attraction of this latest movie, coming off Lord of the Rings, was "at the time it was just a story that was interesting to me for several reasons. I had heard of this guy, Hopkins, I am interested in horses, as well as Buffalo Bill, because I think he was instrumental in creating the Western genre for better and for worse. His mythologizing of the west was his touchstone in the community." It also appears that starring in a movie featuring, in part, the exploits of Buffalo Bill, had personal significance for Mortensen "because I'm related to him through my mom's side of the family."

So over the years, Mortensen says, his interest in Native American history and culture was another factor in his decision to take on this grand Western adventure. "I like that period of history, especially for this country, when we began to look beyond the borders and look at this country's place in the world." Mortensen has clearly no qualms in having starred in two such physically demanding projects, "that are both, in my opinion, really entertaining adventures, sort of ordeal or challenge and heroic stories. They're also thought provoking, not just a yarn, and have popular appeal. It's great that I've gotten to be in two projects like that in a row."

Lord of the Rings helped catapult Mortensen as one of Hollywood's major leading men, in a career that had its genesis with a supporting role in Peter Weir's Witness. Back in 1985. With Hidalgo, marking the actor's 44th film appearance, his name is above the title, but this actor clearly cares nothing about such fanciful Hollywood trappings. "I personally don't think the director or actor should ever be above the title. I like those old-fashioned movies where the stories were cast, and they don't show off anybody or any filmmaking aspect, but just tell the story." Mortensen doesn't feel like he is carrying his latest film on his shoulders. "Many others might feel that and maybe I'm in some sort of denial, but I felt the same on this movie as I did on Lord of the Rings. There's this ensemble and interestingly just like on Lord of the Rings, the studio took the chance on a group of largely unknown performers to tell the story and I think the same thing will be true that happened on Lord of the Rings, where this cast is going to get a lot of opportunities and work out of this and have the chance to be very popular."

Asked what he has learned amidst his growing success and fame, Mortensen pauses and smiles slightly. "What I have learned is that I have no plan but I honestly don't have much time to think about it right now as 'm kind of doing press every day; which doesn't leave much time at the end of the day. Maybe I should have a career plan, but I don't."

As interested in politics and social issues as he is in acting, Mortensen says that this election year in the US is important, though insists that he is no more politically motivated than anyone else. "I'm curious about the world and I have a resistance to just assuming that what I see on TV is the gospel truth. I'm curious about things and like to find out as much as I can for myself. I do think that this year's is an important election. It has the usual trappings of one-liners and shallow politicking, but it is a pivotal moment in history. You don't have to be of any political persuasion to see that it's a crucial time in American and world history and that the leadership of the United States has been instrumental in making a pretty good mess of things in a lot of ways, so I think a change would be good. But what that change should be, I don't know."

Perhaps Mortensen can see HIMSELF running for political office, a question he treats with utter disdain. "Movies are complicated enough and there's enough deceit, bluffing, media manipulation and everything else in the movie business. I don't need to add more."