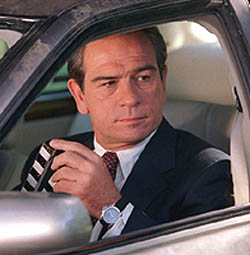 TOMMY LEE BACK IN ALIEN TERRITORY

Tommy Lee Jones has often showed a visible disdain for the press. Now doing the rounds for the much-anticipated Men in Black 2, Jones is coolly cordial, shaking hands and responding simply. The lines on his weathered face are ones of age and experience. After all, Tommy Lee Jones has been carving a comfortable niche as a film star for over two decades. One of his MIB2 co-stars, Lara Flynn Boyle, happily defines him as not only the coolest guy in film, but also "the last real man in Hollywood." Jones smiles at the definition. "I don't know about that."

Quietly stoic, Jones seems the perfect choice as apparent straight man to Will Smith in the MIB films. The sequel, which took close to five years to get off the ground, has Jones' Agent K with no memory of his alien-hunting days with one-time rookie Agent J [Smith], and is now working as a supervisor for a regional post office. But 'J' needs his help when a dangerous alien is bent on destroying earth. Despite the amount of time between the two films, Jones says he was more than happy to don the familiar black garb with no hesitation. "The best thing about THIS script was that it was going to be directed by Barry Sonnenfeld, and it had Will in it. It also meant the chance for us to get back together and have some fun again", he matter-of-factly explains in his familiar Texan drawl. Jones, whose reputation for maintaining a serious work ethic in Hollywood is well known, also feels that having fun on a set is important. "That's a very important part of the process, especially on a project like this. Barry does not believe that you can ask the audience to have any fun, if YOU'RE not having any fun yourself. He dedicates himself to being sure that the day is fun, and Will and I try to do everything we can to do to help him."

Jones, who won an Oscar for his colourful performance in The Fugitive, agrees, comedy, this type especially, is tough. "A wise old actor once said that death is easy; comedy IS hard, which it is. I'm very lucky to be in the company of a couple of masters in Will and Barry." But in preparing to do a comedy, Jones insists he doesn't do anything differently from a drama. "I just learn my lines and pay attention; it's the same thing." Asked whether the sense of humour that permeates through MIB2 is akin to his own, Jones is adamant that not only is that the case, but that he would see the film if were not in it. "Hell yes I'd go and see this and everybody else should too. I think it's very funny and I hope I made some contribution to its sense of humour."

On this film, Jones had his daughter, Victoria, appear in one scene, and it was a proud day on the set. "She put in a solid day's work and is very conscientious. She was brought up on movie sets, so she felt comfortable." Jones wouldn't be drawn into whether he necessarily would want her to pursue an acting career. "I just encourage her to be happy", though the actor does admit that acting is a hard game. "To start one's life as an actor is very, very difficult. There's no emotional or financial security to it." 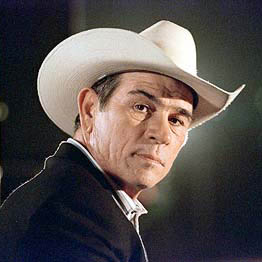 Yet Jones has been a working actor for a little over 30 years. An eighth generation Texan, actor Tommy Lee Jones attended Harvard University, where he roomed with future U.S. Vice President Al Gore. After graduating cum laude from Harvard in 1969, Jones made his stage bow that same year in A Patriot for Me; in 1970 he appeared in his first film, Love Story (listed way, way down the cast list as one of Ryan O'Neal's frat buddies). After this supporting role, Jones got his first film lead in the obscure Canadian film Eliza's Horoscope (1975). In 1976, following a spell on the daytime soap opera One Life to Live, he gained national attention when he was cast in the title role in the TV miniseries The Amazing Howard Hughes (his resemblance to the title character, both vocally and visually, was positively uncanny). Six years later, Jones won further acclaim and an Emmy for his startling performance as murderer Gary Gilmore in The Executioner's Song. Jones spent the rest of the '80s working in both television and film, doing his most notable work on such TV miniseries as Lonesome Dove (1989), for which he earned an Emmy nomination. It was not until the early '90s that the actor became a substantial figure in Hollywood, a position cemented by a Best Supporting Actor Oscar nomination for his role in Oliver Stone's JFK. Two years later, Jones won both that award and a Golden Globe for his driven, starkly funny portrayal of U.S. Marshal Sam Gerard in The Fugitive. His subsequent work during the decade was prolific and enormously varied. In 1994 alone, he could be seen as an insane prison warden in Natural Born Killers, titular baseball hero Ty Cobb in Cobb, a troubled army captain in Blue Sky, a wily federal attorney in The Client, and a psychotic bomber in Blown Away.

Jones was also attached to a number of big-budget action movies, hamming it up as the crazed Two-Face in Batman Forever (1995), donning sunglasses and an attitude to play a special agent in the first Men in Black (1997), and reprising his Fugitive role for the film's 1998 sequel, U.S. Marshals. The following year, he continued this trend, playing Ashley Judd's parole officer in the psychological thriller Double Jeopardy.

Driven and passionate about his work, Jones and his family avoid Hollywood domesticity, preferring to reside in San Antonio, Texas, "a couple of blocks from my wife's mother, and a couple of blocks from MY mother." Far from the glitter of Hollywood, the 56-year old enjoys another passion that has emerged as a second career. "We're in the cattle business. We have two ranches, one is 164 miles from San Antonio, which is where I was born, and then there's another ranch 385 miles to the west." Yet being a rancher, Jones insists, has little to do with keeping it real from his life as a substantial player in the movie business. "I actually LIKE the movie business and work in it all year round, as well as ranching. One is not an antidote to the other, more a complement to the other, though acting is still what I like doing the most."

When he has time, in between the ranching, the acting and the time spent developing his own projects, Jones also finds the time to indulge in polo, which he describes as not so much a passion, "but a game that I play; we're very serious about Polo here." Injured in a match a few years ago, Jones attacked a reckless media "for claiming that I'd been paralysed from the waist down, just to get a spike in their ratings. That was before I could call my mother and daughter to tell them I was ok."

Describing the press in relation to that incident as "predatory", Jones adds that in dealing with a frequently irresponsible media, "you have to watch it all the time, of course, and at the same time, not become cynical." And how does Tommy Lee Jones succeed in avoiding that cynicism? "I work at it.... sometimes it's impossible", he concludes smilingly.