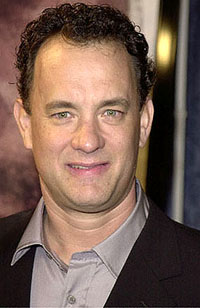 He's a two-time Oscar winner and by all accounts, the nicest A-list star in Hollywood. But his likeable "everyman" screen image is about to be put to the test, playing a hit man protecting his son from the hands of a desperate mob, in Sam Mendes' revisiting of thirties gangsterism - "Road to Perdition". It may be a change of pace for Hanks, but the recent AFI recipient doesn't necessarily see it that way, as he explains to PAUL FISCHER.

Tom Hanks was in his usual jovial mood when we met at a Chicago hotel, an appropriate venue to discuss the Chicago-shot "Road to Perdition". The Tom Hanks that one meets is in stark contrast to his Michael O'Sullivan, the lowbrow hit man and surrogate son to gangster patriarch John Rooney {Paul Newman}. Much has been made of Hanks' change of image for this role. Hanks disagrees that too much has been made of this aspect of the movie. "Because it takes into account a falsehood that it's possible to change the image to begin with, which you can't. You walk into any movie theatre with a preconceived idea of everybody who's in the movie you're about to see, whether it's Liam Neeson or the Affleck Brothers, and everybody knows that. Then hopefully at some point during the movie that switch goes off and you watch the movie and are involved in what's going on. Hopefully you've been able to make some organic connection with the audience that's been there on that particular day, they're moved and that's that."

The 45-year old actor, when asked if he had a need to go down the road travelled by Michael Sullivan, quickly responds that he "didn't NEED to play anything; there's no medicinal quality to doing these movies," he laughingly jibes. "You see what the potential for the movie is, and by that I mean, it's ability to truly examine the theme which you think is expressed in the movie. Then you see who is going to be doing it." In making his choices, Hanks adds "there's no science to it as well as no weighing of pros and cons. It's an instantaneous reaction: I've never seen this before. On the one hand it's a genre movie but actually it's dealing with all this father-son stuff that's been around since the Egyptians started carving clay tablets and telling stories in them. Therefore it's something that I get and would like to explore, so you simply say 'Yeah'."

These days, Hanks has that luxury to make such instantaneous decisions, and that's been the way for the two-time Oscar winner for over two decades. But at the beginning, he recalls making choices on the basis "of being lucky to be offered a job, ANY job. The job could have been selling yoghurt; I would have taken ANY job at that point, because you just want to be able to do it." How times have changed, the actor muses. "I would like to think that I'm at this point where the only things that I have to do are truly fascinating to me. The burden of doing one of these movies is really substantial", Hanks explains. "Not the least of which is when you have to talk about it as much as you have to and the desire to talk it up in a genuine way. If I was to tell you that the sole reason I did "Road to Perdition" was for a change of image, how would you be able to brook that?"

Hanks loves his profession, as choosy as he is, he remains enamoured of it. Despite being consistently labelled the nicest guy in Hollywood, Hanks recalls never loving anything else. "Acting was the greatest job in high school. I never went into this for any other reason in that it's ridiculous amounts of fun. How can this be work pretending to be other people, whether on stage or in the movies? I can't believe they paid me $285 a week in order to do this thing. And I have collected a $10 raise ever since," he adds laughingly. "Some people do this for power, others for fame and some do it so that they can talk to a guy like you at press junkets. I'm not in it for any of those reasons. I shouldn't be called the NICEST guy, but rather the LUCKIEST guy."

It was also the luckiest guy who, at a very youthful 45, received a recent American Film Institute Lifetime Achievement Award. One of the youngest ever recipients, Hanks admits that the whole affair was somewhat surreal, to say the least. "I got the phone call, went through about five months of self-loathing because of it, made my peace with it till I just hoped it was a good party, showed good clips, worried who was sitting where and sat down."

And Hanks' career is not slowing down. Next he re-teams with Steven Spielberg in "Catch Me If You Can", opposite Leonardo DiCaprio. "That was a nice experience. I like working with people a second time around because you're passed the getting-to-know-you phase and you just know how they work. Steven works very fast. He's got the same crew as he had when we made "Saving Private Ryan", and there's the added bonus of working with Leo who added something else to the mix."

While "Road to Perdition" revisits the classic world of the American gangster, at the film's core is an often profound examination of fathers and sons, told in a complex way. For Hanks, that was clearly what attracted him to the project. He was able to respond to the material, "by looking back at the relationship that I had with my own father, as well as the relationship that I have with my own kids. When I read it, I said to myself: I know what these guys are going through."

Hanks' relationship with his own father, who was a cook, may not have mirrored this film precisely, but the actor does concede that "it was strained and I didn't live with him for a long time, though basically he was a good guy. He was as complex as anybody's is going to be. We were two different personality types. My dad was a shy man. We didn't have a lot in common but we still had a good relationship." Hanks believes that their relationship "would have been better now, now that I'm 45."

Hanks took much from his father, he says, and brought that to his relationship with his own sons. "Of course everybody does. There's a lot of stuff that went down not just between me but also the rest of my dad's kids, and so I don't want my kids to go through that. There are also some mistakes that I know I'm making, no matter how hard I try." As for the most important lesson he hopes to instil in his children, the actor pauses slightly. "To like what you do and wake up and be content in the morning."

Tom Hanks/Road to Perdition Interview by Paul Fischer in Chicago.