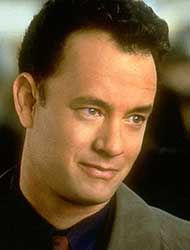 Tom Hanks has long been fascinated as much with new technology as acting, or at least marrying the two. Dressed in a black suit and in a typically jovial mood when meeting the press in a New York hotel, Hanks fell in love with the classic Xmas story of The Polar Express when he first picked it up years ago. "I found it a haunting, very effective story, and you really can't quite put your finger on it. I've been reading it to my kids, I think, since it was published," referring to the visually lush Chris Van Allsburg's visually lush story about a young boy whose apparent scepticism about the existence of Santa Claus is put to the test when he embarks on a mythical train journey to the North Pole. Hanks says that it's a story that tends to be read "as you get closer and closer to Christmas." "There's something very stunning, quite frankly, about Van Allsburg's paintings. They're not drawings, but impressionistic versions of this child's house and what it was like to be on a train and all the aspects of the adventure that they go on. It was always a very tactile feeling that I got from reading the book as well as a very elegant, simple, but complicated, sophisticated story about what Christmas means to each and every one of us." It was Hanks who bought the book in the hope of adapting it to the screen, but at the time the Oscar winning actor wasn't sure if it could be done. "The idea of maybe turning that into a movie is a complete X-factor. You have no idea if that's going to be possible or not, which was why when Bob {Zemeckis] and I first started talking about it, it was really only from the perspective of, 'Well, what do you think? Is something possible here or not?' "

The possibilities seemed endless when Hanks and Zemeckis - who had previously collaborated on Forrest Gump and Cast Away - decided to do the entire movie within the world of computer graphics and stop motion. An artistic and bold way to make a film, it is a process that continues to generate controversy and increases the risk of failure, if one was to believe recent reports in the Wall Street Journal which has gone to length to criticise this approach to film making and details the risks involved. Hanks, of course, doesn't mind the criticisms, arguing that any time the cinema has delivered new technologies in the past, the same criticisms existed.

"Every one of these movies is an incredible risk, but at the end of the day, who is going to care, because if they don't care, we're in big trouble. Down through history people were walking and saying, 'Let me get this straight. You're going to make a movie about a baby monkey and you're going to do it with a little clay figure and you're going to do it one little shot at a time. What a stupid thing! No one's going to care about that.' And the movie is King Kong. Or George Lucas is making some rock-em, sock-em space thing with guns and robots. Everybody says, 'Nobody's going to care about that.' And it ends up being Star Wars. The only thing that is going to matter is the story and the aspect of how expensive it is or how technologically difficult it is, is just the aspect of we had to figure out how to make the movie and that's the way we ended up making the movie. Is it a big risk? Yeah, of course. We could lose our shirts and people could lose their jobs if the movie stinks, but that would be the same thing if it was me and Nona Gaye driving in a car talking to one another. If that movie stinks too, we'd be in just as much trouble."

Though Hanks gets to play 5 characters in Polar Express, including the central character of the boy [completely rendered as a Chi character], Hanks doesn't see a time when this kind of film making will making actors eventually obsolete. "The nature of motion capture is only going to work for certain films and is not going to put any other type of movies out of business," Hanks argues. "In fact, motion capture has been used for movies you yourself have said are great, from The Matrix to Titanic. It's in countless movies and it's been used in the same sort of way. What this can do from an actor's point of view is, quite frankly, free us up to a huge degree. I've used this analogy many times, and I've apologized to Meryl Streep, but she's just the name that comes up. If Meryl Streep can perform the greatest Genghis Khan in history, better than anyone else can play Genghis Khan, Meryl Streep can play Genghis Khan. And if James Earl Jones can play the greatest Mickey Rooney in The Mickey Rooney Story, James Earl Jones can now play Mickey Rooney in The Mickey Rooney Story. It's an extraordinary opportunity for actors to no longer be limited by size, weight, colour of hair, gender or race, which is actually really great news. But the fact is, it's right now still pretty prohibitively expensive and very, very difficult for the computer to capture, for example, the essence of a man kissing a woman. All those dots would meet in the face and all of a sudden the computer would go nuts and it would be one big head, so there's not even a way to do that yet. Therefore what this allows from a filmmaker's point of view is, literally, if they can imagine it there's a new way in order to film it, and it's a little easier and a little more costly than some of the other ways. So far as an actor goes it's possible now to play any character in any circumstance in a way that simply was not as feasible as before."

From a purely acting perspective, Hanks says that Polar Express gave him an opportunity to work in an unusually traditional acting environment. "I found, that it is actually a return to a type of acting that acting in films does not allow you to do. It was exactly like rehearsing a play in the round, in that you don't have to worry about lights, angles, rails, cameras, or over the shoulders coverage. We essentially did a great series of 10 or 15 minute plays in which we did it real, in real time, and when we were done, Bob had everything that he needed to. So, as far as being an actor goes, it was a blast."

Not to mention the added challenge of playing numerous characters, which clearly presented this actor with some unique opportunities? "When Bob explained it enough to me so that I could understand the process we were doing would make it possible for grown-ups to play the kids, that Nona could play the girl and I could play the boy and Eddie Deezen and Peter Scolari could come along with it, that opened up a lot of opportunities for one aspect of it. But then came, where are all these adults coming from? And what they are, in my sensibilities, is they're all the caregivers. They're all the authorities in this boy's life and he imagines them as variations on himself and variations on his uncles and variations on his father, as well as the great mystery of how he would have imagined Santa Claus needed to be himself. Santa Claus to this boy was not this roly-poly accountant that came down the chimney every day, but this huge, muscular man that had to lift up this massive package, this sack of presents. Bob at one point said that I should play every role in this movie because then we could do it. But there's only so much that I can internally grasp as an actor and on the day of tests that we did I played five or six or seven roles in the course of that day, and I said, 'Bob, I'm exhausted here.' So in my mind, I had a track on the five characters that I played. I could understand the differences between them all and I understood how they related to the boy and I understood what the boy's perceptions of them were. And it was just a circumstance where it was doable. It was possible without having to do it in the way, like say for example, Jerry Lewis made The Family Jewels or something like that."

But as Hanks insists on reminding of us, as technologically clever as Polar Express is, it still boils down to theme and story. Asked whether this is another film about a loss of innocence, Hanks, mockingly, buries his face into his hands. "Isn't every movie about lost innocence? It's like every time you make a movie about people who are innocent it's about the lost innocence. It's maddening sometimes. It's about belief, in that everybody carries around their beliefs with them on their sleeve. It's a very personal thing and it can't be described." Despite us living in cynical times, Hanks adds that without typical bad guys and a conventional narrative thread, Polar Express still remains a film for today's hardened, contemporary audiences. "When we began, and Bob began writing the screenplay, he started the movie with the first line of the book and ended it with the last, staying away from the standard protagonist-antagonist narrative, which is usually a bullshit way to move the story along or bring jeopardy to it. I think the vast majority of the audience can see a formulaic narrative a million miles away and they're tired of it, because it's very predictable. The reason you go to the movies is to be surprised by a narrative that you can't predict, so in a lot of ways, we kept figuring out what not to do with the story as opposed to WHAT to do. But this all came out of a stream of consciousness of Bob's when he started digging into the material."

One may or not believe in the mythology of Santa Claus that permeates throughout Polar Express, and the actor may have stopped believing in Santa a long time ago, but maybe not, he concedes, laughingly. "I actually subscribe to the more Russian tradition of a guy named Baz Morose who would come around and I think he'd leave you a pear if you were a good boy and a switch if you were a bad boy. Let me just say I had my share of pears." Never one to be totally serious, when asked what his traditional Christmas movie is, the actor says, without a pause. "My favourite traditional Christmas movie that I like to watch is All Quiet on the Western Front. It's just not December without that movie in my house."