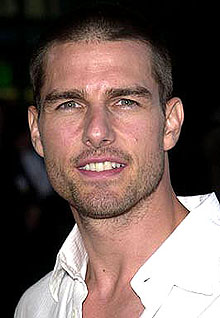 It's hard to believe that Tom Cruise is about to turn 40. Far more relaxed and good-spirited than the last time we met for 'Vanilla Sky'; the perennially youthful Cruise has been on top of his game for close to two decades, but has no fears about entering this new decade of his life. "I get asked about turning 40 a lot, and to be quite honest, I haven't really been thinking about it. You get so busy with your kids and work, but when you're a teenager or in your twenties, your common thought is: Where am I going to be? I just hoped that I would just keep developing and have the opportunities to make different kinds of movies and hopefully just SURVIVE the flush of when you first start working."

Cruise HAS survived, since attaining stardom back in 1983 in 'Risky Business', the first major film that catapulted the young actor. Cruise is modestly surprised that he remained on top for some 20 years. "It's kind of amazing to me you know, showing up on the set and working with Cameron Crowe and then showing up the next day working with Spielberg and having that finally coming about, so yeah, I AM surprised. I'm surprised at how well things have gone."

Yet, Cruise adds, he "still wants to keep on pushing and see what's going to happen next, but the more you work you start to gain a confidence in that work and yet every time you go to do it again, you have that thing in your stomach and get nervous beforehand." And the actor wouldn't have it any other way. "I like that nervousness, not fear but excitement, the same as I felt when I was racing cars. Before the race, no matter what happens, you still have that feeling, which sharpens things up." Even now. "I still get excited. Days before I don't sleep and I only sleep a couple of hours before I start shooting."

The lack of sleep doesn't impair Cruise's energy. On screen, the 39-year old remains in peak condition, as exemplified by his work in 'Minority Report', the much anticipated debut pairing of the Hollywood superstar with A-list director Steven Spielberg. 40 he may almost be, but he won't shy away from getting physical on screen. "I warm up a lot as I always do", Cruise explains smilingly. "After all, at any age you can pull a muscle and that's just a real pain. But I finished 'Vanilla Sky', shaved my head and began work on 'Minority Report' the next day. And I just warmed up and tried to stay flexible."

As to why it took so long for Cruise and Spielberg to work together? "It was a matter of finding good material", the actor explains. "Everyone wants to work with Steven and it's just difficult to find something that either of us are interested in, and we feel can be challenging and exciting. We came very close on 'Rain Man' to work together which he developed, but he owed Paramount, another 'Raiders' film and so that was very disappointing to me because I was looking forward to working with him."

14 years later the duo finally hooked up, though it took 3 years of development of the 'Minority' Report screenplay for the dream project to become a cinematic reality. As for why THIS script in particular? "When I read the [Phillip K. Dick] short story, I just thought it had great potential and felt very cinematic. It was a film that for a director, was a very challenging piece to make, because you're creating this world yet it also has great characters for an actor to play. So all those elements were something that I thought were challenging and not a walk in the park kind of film to make and when I read it, I wondered what Steven would do with this, what will he create, what will this world be like?"

'Minority Report' is a futuristic thriller set in 2054 in Washington D.C.'s judicial system in which killers are arrested and convicted before they commit murder using a psychic technology. Tom Cruise is the head of this Pre-crime unit and is himself accused of the future murder of a man he hasn't even met. Chilling in its vision of the future, as it delves into facets of identity that Cruise agrees, are not too far off the mark. "When you read the Philip K. Dick story and then when you meet with all these scientists who talk about what the future is likely to be, that's where we're going?" The film also explores the notion of choice, the idea that even in a controlled future, there is always a choice but this also a fute where the 'precognitives' can predict the future. Cruise says that while he does not believe in Fate, "it would be pretty cool" to know one's future. "I would like to live in a society where your future was available to you. I think that would be interesting, and therefore be able to have a choice."

The film's vision of the future isn't all dark. Cruise does get to drive an amazingly futuristic Lexus. "Gotta have the toys, man", Cruise laughingly points out. The toys also include working with blue screen and this actor's insistence on embracing the new technology. 20 years in the business, and Cruise loves the new digital technology.

Cruise continues to drive himself professionally, beginning with 'Last Samurai' and a third 'Mission Impossible', this time to be directed by David Fincher. Then there are the plans for his 40th birthday. "I think some friends of mine are going to throw a party for me so I'm just leaving it up to them. They're quite enthusiastic about that evening so I'm going to leave it to them."