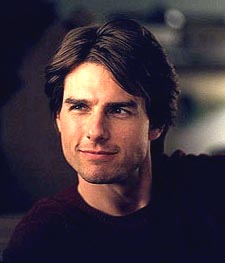 He is one of the biggest stars of the planet, fiercely private and a passionate filmmaker. Rarely doing print interviews, Tom Cruise is going full steam ahead to spread the word that Vanilla Sky is the high point of a career of many high points. Still reeling over a much publicised divorce, Cruise talks passionately about his latest work and on life post-Nicole to PAUL FISCHER.

Tom Cruise may indeed be one of the world's few superstars, but don't expect any airs and graces from the man who's been on top of his game for a decade. Casually attired, Cruise seems in remarkable spirits.

Good natured and always laughing, one expresses surprise that this fiercely guarded actor has decided to do more press than usual, in promoting his latest film, the highly complex new work by Cameron Crowe, Vanilla Sky. "I always try to support the pictures and I just felt like I wanted to communicate something about it - I really haven't felt like I haven't done this; it feels like I have a pretty full press schedule", Cruise insists laughingly. "Thinking back if I haven't done these, I feel like I have." The truth be told, he gave a press conference in support of Crowe's Jerry Maguire, but little since.

The 39-year old former Thomas Cruise Mapother IV is genuinely passionate about what he does, and while doing all he can to protect his privacy, Cruise is philosophical when asked to equate his fame with any specific lessons he may have learnt from last year and the whole media-hyped divorce. "I don't think that has anything to do with 'fame.' I think there are always lessons about life. I try to live my life as best I can. I have two kids, a company and I care about people very much. I am different, really, than David, my Vanilla Sky character, in that I think about other people and how they feel and think about the effects I create around. So that doesn't mean I'm perfect but in the last year, have I learned a lesson?" The hardest lesson he has learned, Cruise adds, was his surprise "as to the level that people, so-called 'friends' would go in terms of writing things about us and the things that were said especially because I've always been protective of my family, Nicole included. Even after, we're still a family including our kids. At the same time I was producing The Others and finishing that, producing Vanilla Sky and acting in that. I had Minority Report on the other end with Steven Spielberg, and I was averaging, some nights, three hours [of sleep]. I'm also the kind of person who doesn't believe in making my problems other people's problems. Certainly, as a parent, I don't want to make my problems my kids' problems. I'm just not a complainer." Cruise concedes that he lives "a blessed life and it's something I've been very aware to not take advantage of, and I love my work." 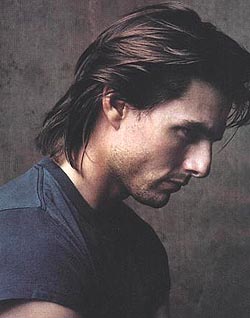 Much was written about him in the wake of his marriage, but always the professional, Tom tries not to let that 'stuff' get in the way. "I don't spend a lot reading what's written about me, except when the lawyers bring something to my attention. I've got too much responsibility with my family and got kids. I try to keep that stuff off as much as possible. I'm not a person who indulges in gossip."

Cruise would much rather 'indulge' in talking work, and his latest is the starring role in Cameron Crowe's non-conformist Vanilla Sky, in which Tom plays a wealthy egocentric magazine publisher, whose life takes on an unexpected turn when he meets the alluring Sofia, played by new love Penelope Cruz.

Cruise believes this is his best work to date.

"I'm just very proud of this film. It's a very important movie for me, personally. It's a very personal movie for Cameron and I'm really proud of it." Proud of it, he says, because it represents a unique phase in both Cruise's and Crowe's careers, he adds. "I think it's the kind of film that has so many different elements to it. It's a very ambitious picture with what Cameron has done with it and it's a film that's looking at creating this pop culture ride along with a kind of thriller element, yet has all of Cameron Crowe's ideas and the questions and things that he's interested in that I find fascinating questions in my mind. We look at 'What is casual sex?' and ways in terms of taking responsibility for our lives. It was a film that was constructed with that ride if you want, that pop culture ride but yet underneath there are some things you can walk with and it's a film you want to see before dinner so you can sit down and talk about it. That's how the picture works - it makes you want to sit down and talk about it."

A rarity in the world of mainstream Hollywood: A film that makes you THINK?
"There are certainly films that you talk about but sometimes, films are intended for that. Look at Mission Impossible, which is a ride; you kind of click on, go, escape and enjoy yourself and then go on with the rest of your day, Vanilla Sky is certainly intended to give people some things to think about." 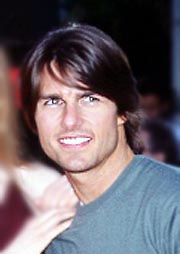 Vanilla Sky is based on the surreal Spanish film Open your Eyes. Cruise recalls why he felt this passionate need to buy the US rights for the film. "By the time I got to the credits, I remember just being on the edge of my seat, calling and saying: 'Look - just buy this movie. Buy this movie.' And I had to sit down and think about what this movie was about. I found myself discussing it with people who hadn't even seen it and wanting to talk about it, and some of the questions it was asking. When I showed it to Cameron we sat down and started having a dialogue about the film. It was one of those films that, in deals, you have - we just bought it." Cruise didn't see it as uniquely Spanish. "The thing that was fascinating to me about the film is that it's not culturally-based. When you look at Open Your Eyes, it's kind of dealing with universal themes and those characters could have been anybody. It also left it open-ended where it left room for interpretation," and once Tom brought in friend Cameron Crowe to adapt and direct it, that was the key. "Cameron could step in and I knew that it could be a Cameron Crowe movie - same story but a Cameron Crowe picture. A lot of the themes that Cameron was exploring were the things we talked about. I also feel that the movie is very much a love story."

Talking about love: Cruise had several hot scenes with leading lady Penelope, but insists they "got together" after wrapping. He cleverly skirts around the question of on-screen chemistry between Cruise and Cruz. "Cameron [Crowe] is incredible when you look at Renee Zellweger, for instance, in terms of casting. As a filmmaker, you look at his characters and where that chemistry is needed, I think he casts so well and his writing of those scenes is wonderful, extraordinary, actually, coupled with his ability to direct it. You can have two people who might have chemistry together but is it captured? There are so many different elements that come into play that can make something romantic or real, and the story really pivots on that point, on that pinhead, one night. The audience has to feel that relationship and want to enjoy that relationship. It's very much in the filmmakers' hand," says the actor.

Cruise is a workaholic, whether he is movie star or producer, there is no stopping him. Tom will continue to publicise the film, and will even spend a few days in Australia. "That's still my second home; after all, my kids are Australian." Then he begins work on Sydney Pollack's Cold Mountain, and Tom is excited about next year's Minority Report. "Have you seen the trailer? It's coming out. It's Spielberg on fire. I can't wait. I haven't seen the whole picture. I saw about fifteen minutes of it and the trailer." Asked if he found it refreshing to let his hair down on Minority Report and just act, the actor laughingly replies: "Well, I'm bald in the movie."

It's good to see that superstar Cruise tries not to take himself too seriously.