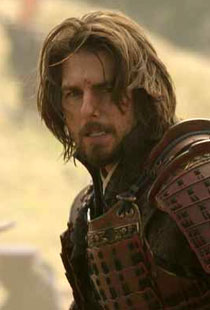 If ever there was an actor, or rather movie star, that knows how to control a room full of clambering media, it's Tom Cruise. Charming, hypnotic, a man who knows how to court the media and publicise his image, whatever that may be. In a Beverly Hills hotel room, Cruise apologises for his slightly dishevelled appearance. "I've been filming all night", he says, smilingly. Dressed in black, his tired demeanour doesn't prevent him from discussing topics that range from scientology, to literacy and his latest film The Last Samurai, for which some are hinting that this biggest of movie stars may finally be recognized with an Oscar nomination. But if he is at all concerned about award recognition, Cruise isn't about to show it here. "To me, I just enjoy what I do. Success and awards are great, but the accomplishment of it is the doing of it. If I got something from my peers, people who understand and make movies, then that would be wonderful, but it s not why I do what I do. I just really feel privileged to make movies, and that's why I do it," Cruise says. Yet he dodges the key question: Does he have a responsibility to promote a film for Oscar consideration and where would he draw the line? "I always feel a responsibility to promote a film, and I am just going to promote this film. I haven't opened any shopping malls...but I may," he adds, laughingly. I do believe, like a record album, that every film has its audience and I have made very diverse films. From Born on The 4th of July" to "Interview with The Vampire", because as an audience, I enjoy different types of movies. "Magnolia." Even "Rain Man", when we were making that... You look at this movie now, and I'm very, very proud of this film, [but] you never know how a movie is going to turn out, yet I'll travel around and I'll talk about the movie and do what I can to support it. So much of my life has gone into my films and I want people who want to see the movie to go see the movie. I know what it takes to make a film."

Cruise is now on a mission to sell his latest film, The Last Samurai, set in 1876, in which he plays a tormented soldier, who had fought in both the American Civil War and Indian Wars, battles that have left him emotionally crippled. Fate intervenes and leads him to Japan and a relationship with a Samurai warrior and his family that changes his life forever. For the actor, working on this exotic epic reminded him of the first time he saw Lawrence of Arabia as a child which is when he first dreamed of becoming a part of that mythical world on the screen. "You have to understand that as a kid when I was growing up, I remember vividly being on the roof of my family's station wagon, and across the street was the Sahara Desert. I always wanted to see other places and learn about how other people lived. I began to travel and saw different cultures even within America." But he found something uniquely fascinating about Japan when he started visiting that country in preparation for Last Samurai. "I was absolutely fascinated and in awe of the culture. I found it ecstatic, the people fascinating and I just wanted to know more about their history, how they lived, and how they got to where they are today. One of the great things about being an actor, in doing what I do, is I get to travel to places like that and I learn about the people and that is the most enjoyable thing," Cruise says with a genuine passion and enthusiasm.

Cruise is an actor with a reputation of taking his work seriously and that was especially true of The Last Samurai, which he worked on for close to three years. While the actor denies that he worked especially hard on this film, as against others, Cruise says that this film had its own set of problems. "It was different in that it took me almost a year to physically be able to make this picture. I love and take great pride in what I do; so I can't be involved in something, I go all the way" Cruise says. Cruise admits to have had serious doubts as to whether he was able to take on one of the most physically and emotionally daunting films of his career. He recalls having spent a year just physically developing the character, as well as the transition that the character makes throughout the movie. "I have copious amounts of notes that I remember for the training sequences and where we start and where we end up. I haven't really found or made an epic film and I knew what that was going for, so I needed that kind of time to absorb the film and to work with Ed and Marshall and I enjoyed it.

Cruise is passionate about a film that explores the Samurai ideals of loyalty, courage and sacrifice. For the actor, making a film that espouses such philosophies in this cynical age we live in was of importance to the actor. "Those values are very important to me and important to have in life. I look at the Samurai because they were the artists of their time, who were educated to be leaders and to lead and actually help people. What I think struck me when I read Bushido is compassion... If there's no one there to help go out and find someone, to help - that hit me, because I try to lead my life like that."

Thematically, The Last Samurai explores Cruise's character's search for an inner peace. For the actor, he has been able to find that himself, he says, with a genuine passion, through Scientology. "It's well known I'm a Scientologist, and that has helped me to find that inner peace in my life and it's something that has given me great stability and tools that I use," says Cruise, who has rarely discussed Scientology to the press. "It's also something that has enabled me to help others in a way that I have always wanted to. We have study technology that is applied and really enables a person to educate themselves so they can become literally rehabilitated. We have, you know, programs that rehabilitates criminals and a successful drug rehabilitation program, that has helped hundreds of thousands of people get off drugs, and can go back to society and have happiness and not feel that they have a disease, but to feel that they are able. So there are a lot of things in my life that have given ME that inner peace."

Cruise also adds that it helps in all areas of his life. "As an actor, with my kids, with Penelope, Nic, and with my job. When you're happy, life is easier to deal with, and it's not less interesting. It's definitely challenging and exciting, in my relationship with my kids, which has always been wonderful. So it grows, and it gets better, and it's, not just the success of a film that is my basis of happiness, it is really a pleasure in life, a pleasure in my work, a pleasure with my kids where I'm there with them, or with Penelope, with people that I find, it's wonderful, it does help, because when you are a parent who's happy and there I see it in them."

To reinforce his sense of family, Cruise is look forward to the upcoming holidays, spending Thanksgiving with his children and sibling, but don't look for the superstar basting the turkey. "I have cooked turkeys in my day, but when mom is around, I will let her do that. My mother is a great cook, so when she is around, I like her stuffing best. I like having lots of people around. Lots of kids. I live with my sister and her three kids, so the more kids, the more friends and family and anyone who wants to come and hang out. I enjoy that. Some of my fondest memories as a child growing up were those big Christmases with the cousins," Cruise recalls. "I would say one of the best Christmases as a kid was the time when we didn't buy anything. My mother actually came up with this idea to pick names out of a hat and for a month you had to do something for that person and on Christmas day, you had to do something special for that person every day for a month leading up to Christmas without revealing who it is. So I had one of my sisters and had to go in and make her bed while she was in the shower without getting caught. Then Christmas Day came and we each stood up and said who we had and wrote a story and I just loved that. We would go to nursing homes to help people around that time. What is a life if you are not contributing to others and doing something to help someone?" Cruise hopes to repeat that tradition this year, that is when he is not busy convincing the world to see his movie.

As to the future, Cruise may be hinting that he will not be starring in Mission Impossible 3 any time soon, but he is currently shooting Michael Mann's Collateral which will probably undergo a title change. In a change of pace, Cruise plays a contract killer. "I've been so fortunate to go from Ed Zwick to Michael Mann, both of whom are on top of their game, who have total command of what they do and these two pictures couldn't be more different and unique in their characters. When I started out I was thinking: you're never going to work again or will I work and what's going to happen and now I'm having a blast."

THE LAST SAMURAI on January 15