The Presidents of the United States of America - Some Postman, Love Everybody 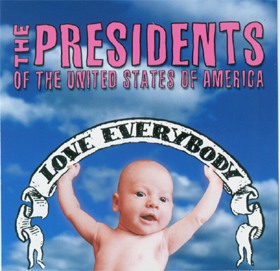 Yeeaagghh! After an unpredictable US election in 2004, what better band to resurface than the future leaders of buoyant, absurdist rock, the Presidents of the United States of America? The newly-reunited PUSA has been in the studio cooking up a new single 'Some Postman'.

Since the band's split in December of 1997 fans have been sending letters and emails urging the band to reunite, and questioning why they broke up in the first place? Truth be told, their decision to disband came as a surprise to just about everyone. Twelve months earlier, the Seattle based trio had released II, the follow-up to their wildly successful 1995 self-titled Columbia Records debut.

Recorded for $8000 and initially released in the US on indie label Popllama, The Presidents of the United States of America went five times platinum in Australia, became one of the biggest selling albums of the year, rocketed all the way to #6 on Billboard's Top 200 Album Chart, produced four Australian Top 40 hits ('Lump', 'Peaches', 'Kitty' and 'Dune Buggy'). a #1 single on Billboard's Modern Rock Chart, and gamered two Grammy nominations and a gaggle of critical praise for its sense of pop savvy and quirkiness.

Their videos blanketed MTV, they toured the planet, played a live MTV concert at Mount Rushmore and appeared on The Late Show with David Letterman, The Tonight Show with Jay Leno, Late Night with Conan O'Brien, the Howard Stern Show and Dick Clark's Rockin' New Year's Eve. As if this wasn't enough, II spawned another top ten Modern Rock hit 'Mach 5' and the band contributed a rocking cover of 'Video Killed the Radio Star' to the platinum selling soundtrack to Adam Sandler's 'The Wedding Singer'. At the end of the line, Pure Frosting (an album of b-sides and rarities), the band's swan song for Columbia, included a cover of the Ian Hunter song 'Cleveland Rocks', which was used for many seasons as the theme song to the Emmy-nominated television series, 'The Drew Carey Show'. For the average artist, such achievements usually mark the summation of a long and healthy career - if they're lucky. The Presidents, however accomplished all that and much more in just a couple of years.

"It was an amazing time and we're proud of how hard we worked" says guitarist Dave Dederer. "But as difficult as it may be to comprehend, it all became a bit overwhelming. It's sort of a be careful what you wish for kind of thing. We went three years without a day off and worked ourselves to exhaustion. Eventually, we reached a point where we had to take a break".

In the five years that followed, each President worked on various projects; Ballew formed a band with Young Fresh Fellows drummer Tad Hutchison, cleverly titled Chris and Tad. In addition, he built his own recording studio, where he writes and produces music for advertising, film and television. Dederer played with former Guns N' Roses and current Velvet Revolver bassist Duff McKagan in a duo called The Gentlemen and in McKagan's band, Loaded. The guitarist also worked on a benefit for Seattle non-profit YouthCare and served as a public relations consultant to Experience Hendrix, LLC, Drummer Jason Finn became a much sought after Seattle stickman, serving time with The Fastbacks, The Nevada Bachelors and the Gentlemen, among others. In between, the trio collaborated on a project called Subset, which featured famed 'Baby Got Back' rapper Sir Mix-A-Lot. Though the three friends recorded an album (2000's Freaked out and small) for Internet start-up Musicblitz.com, the Presidents did not perform publicly for almost five years.

For their new album 'Love Everybody' the band recorded basic tracks at Egg Studios with Conrad Uno (Posies, Supersuckers, Young Fresh Fellows, et al) and a Jupiter Studios with Martin Feveyear (Mudhoney, Mark Lanegan). Ballew's home studio, a shack in his backyard, is the band's choice for polishing and rough mixing new tracks. The new songs run the gamut, though one tune, 'Some Postman' has already proven itself after being leaked onto Seattle's KNDD and subsequently turning into a highly requested local hit. Says Dederer, "I blown away when we played two sold out shows recently at the Showbox. I expected it when people sang along to the songs from our first record, but the whole crowd was singing along both nights to 'Some Postman', which isn't even commercially available yet."

The band was offered several record deals, all of which they decided to walk away from in order to have more control over their music and careers, and to keep it all local. They recently hired Seattle based manager David Meinert at The Blue Team Music to coordinate the marketing and promotion of their new album which will be released on the band's own PUSA Music label, and distributed through Northwest based NAIL/Allegro Distribution.

The band will also re-release their eponymous multiplatinum debut this Autumn along with a DVD including their hit videos, live and interview footage. Nine years later the songs - smart, tuneful and exhilarating - from The Presidents of the United States of America still hold up. "We gained back the rights to the record and thought it would be fun to put it back out there on our own terms", says Ballew.

For Australia, the Presidents selected new Brisbane based indie label Blast Records, who are bringing the band out to tour in late 2005.

"We're delighted to launch our label with an act of the calibre of The Presidents", said label manager Mark Spillane. "The band have a strong history in Australia and we're proud to be able to bring some fun back into rock and make sure that Australian fans get the opportunity to share in career of this act that just keeps going from strength to strength."

Does this mean the band is back together for good?

"I think so" says lead singer Chris Ballew. 'We're gonna take things at an even pace and not kill ourselves this time. The key is to keep everything fun and in perspective and cherish it and keep it all positive. If we can do that - and I think we can - I really don't see us ever splitting up. Besides", he laughs, "we can't play the break up card again. We've already done that once".