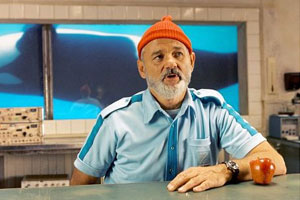 LIFE WITH MURRAY
Bill Murray/The Life Aquatic with Steve Zissou Interview by Paul Fischer inNew York.If there is one constant theme in both Life Aquatic and Bill Murray's previous foray into cinematic self-reflection, Lost in Translation, both characters reflect on their lives, albeit in varying fashions. Murray himself, who rarely does interviews these days, is not one to ponder over his own 'life aquatic', but sitting on a dais, simply attired in t-shirt and jeans, and in good humour, concedes that despite his early successes, he rarely gives much thought as to any kind of a legacy, and might even consider a career change at this point in his life. "I've had lots of things to do and I sort of thought about this a few years ago about: do I want to be a big movie star, and I didn't really want to be one. I decided I wanted to live my life and see what happened there and at the same time, I take these jobs where you don't necessarily get paid a lot of money but you work with people who are good and you do what you want to do. I figured that one of these might be a hit one day and I'll get whatever I need in terms of being noticed. And, you know, damned if this movie didn't really do that. It did, but I made half a dozen, 7 or 8 movies in between that were all good but they just didn't have it all work at once like that and I like working that way. I don't like feeling the pressure of having to be the biggest star in the world and I'm trying to help this movie and talk about it. I don't want to get stuck or feel desperate, It's OK, I've had a great run and if I even changed careers, that would be an adventure too," Murray says, philosophically, adding that he has been seriously thinking of a career change. "I'd like to write, that's what I'd like to do," but not the kind of writing one would necessarily expect. "I think I'd like to write a play which is always what I wanted to do," Murray confesses.

It was Sofia Coppola's Oscar winning Lost in Translation, that managed to almost rejuvenate interest in Bill Murray, one of those "small movies" he refers to, that became a worldwide hit and garnered the actor a Best Actor Oscar nomination, an event he looks back on with a certain gleeful cynicism. "Well, you know, it's kind of nice, and I think it's going to be an annual thing where once every 25 years I get nominated." Perhaps he may not have to wait that long, if Academy voters are willing to embrace his Steve Zissou, a once famous mariner seeking revenge on the fish that killed his best friend, while at the same time trying to forge a relationship with a long lost son, played by Owen Wilson. It's another unique character as part of the Murray-Wes Anderson school of the unconventional, but clearly actors love the chance to play them, Murray included. "These characters don't have any controls on them, especially this fellow in Life Aquatic. He doesn't have any censors that say the next thing you're going to say might be bad behaviour, so you might want to hold that back and he just sort of lets go. There's no governor here holding him back and all the emotions are expressed. He is hit, bang, and out it comes which is kind of fun to play. You don't get to do that in life that often because you're supposed to obey some rules of politeness or respect and we don't have time for that in the movies. Wes wants to see the emotion right now so it's kind of a treat to do that."

Treat or not, The Life Aquatic was also Murray's toughest film assignment to date, shot on location at sea in the heart of winter. "This is by far the hardest film I've ever done and the most physically and emotionally demanding, personally and professionally and I think the most ambitious," admits the actor, adding he might have been more reticent to take this on, had it not been for director Anderson. "I mean, if you read the script and you didn't know who was in charge, you would be much less confident. I sure as hell wouldn't leave the country and go over there, for just anybody, because you've got to have some faith in who you're with." Described by his co-star Angelica Huston as a combination of melancholy and loveable, those extreme personality traits seem perfect for an actor playing characters imbued with extremes of humanity, and Murray does not necessarily disagree. "Well, that's the trick isn't it? How do you do it? If you're really playing the game of life, you have these feelings, you get them and it's how you come back with them. How you do it, is not necessarily re-act but what happens to you when you have a melancholy feeling? I think melancholy's kind of sweet sometimes but it doesn't mean it's a negative or a mean thing. It's just something that happens in life, like Autumn," he adds, smilingly.

While at the genesis of his success, Murray was defined by his own blend of wry comedy, exemplified from Meatballs to Ghostbusters, but the Bill Murray on screen today, is older, wiser, and far more profound than the earlier, self-deprecating comic of Chicago's Second City school of improvisation. Asked whether he is consciously entering a serious phase of his career, Murray glibly refers to it as his possible "blue period, but insists that his entire career has consisted of serious phases at one time or another, "if you take it seriously no matter if you're doing high profile, dramatic pieces, like epics or not. That's just a sort of perception but I've taken it all seriously, the work part of it, but you can't take the response to it so seriously, that is the reaction to it. It's pleasant when it's good but you can't get all bent out of shape if it's not pleasant. I like the job, the actual shooting of movies, and when the camera rolls."