The Fairies - Barnaby Takes The Lead 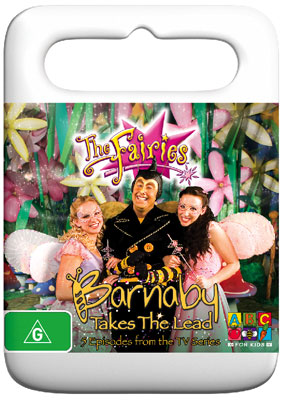 Have fun and lots of laughs with Barnaby and all his Fairyland Friends!

In this fan-fairy-tastic compilation from the The Fairies second television series, Barnaby takes us on five hilarious adventures.

See him do a crazy dance when Wizzy puts wonky magic into his shoes, watch him confuse his Fairyland friends with his many disguises and laugh along as he turns Rhapsodys bad hair day into something even zanier!

Enjoy the gorgeous episode with the Fairy Ballen dancing girls, and Barnaby's self-indulgent fun in the wishing shell. "Barnaby Takes the Lead" will bring many hours of fun and laughter to all fairy fans.

The Fairies, created by Adelaide mum Jen Watts, has already been sold to five countries - Britain, the United States, Malaysia, Bahrain and Qatar.Filmed in South Australia, the series follows the adventures of fairies Harmony, Rhapsody and their magical friends.