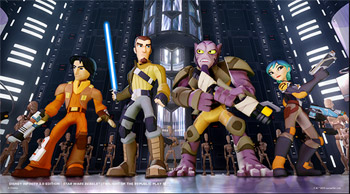 In an effort to thwart the evil plans of the Galactic Empire, these characters are key players in the fight against the forces of the dark side, providing a unique addition to the Disney Infinity 3.0 experience.

Jedi turned rebel fugitive, Kanan Jarrus leads his team in secret operations to help overthrow the Galactic Empire. He defends the innocent with his blaster and Lightsaber™ and guides his Padawan, Ezra, in the ways of the Force™.

Growing up on his own, Ezra Bridger relied on his street smarts – and subconscious Force abilities – to survive on Lothal. That changed when he met the Ghost crew; Ezra came to believe in their cause, and with the help of Kanan, began to learn the ways of the Jedi, using his custom Lightsaber to undermine the Empire and inspire the rebels.

Sabine Wren has explosive talents for art and demolitions alike, and she won't hesitate to use them against the Empire. She can stealthily approach and sabotage the enemy or stand alongside her rebel allies to lend her twin blasters to the cause.

Zeb Orrelios is as strong a brawler as he is headstrong. He stands alongside his fellow rebels with his bo-rifle in hand, ready to take on the Imperial forces.

A Play Set based on Disney•Pixar's upcoming film Inside Out and a Marvel Play Set featuring Hulkbuster, Ultron, and other Marvel characters will also be available. Additional Disney Infinity 3.0 figures and Play Sets will be announced in the coming months.

Disney Infinity is an interactive gaming platform where players have unprecedented freedom and endless opportunity to create stories and play experiences starring the beloved characters from across the worlds of Disney. Building on the success of launching Disney Infinity 1.0 and 2.0, Disney Interactive announced its latest installment to the best-selling 'hybrid toy/video game," Disney Infinity 3.0. In its third iteration, players will again utilise real-world interactive figures to activate original storylines (Play Sets) in the virtual game worlds of popular Star Wars franchises and create new adventures with a variety of characters from Marvel, The Walt Disney Co. and Disney Pixar properties in the Toy Box mode. Disney Infinity 3.0 will be available in stores this Winter. For more information, visit Disney.com/Infinity. 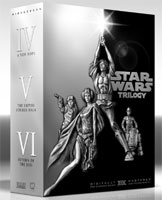 Experience Star Wars™ in exciting new ways -- controller free -- as you wield a Lightsaber, use the Force,...

Play as a Commander for the Rebel Alliance or the Empire in a strategic battle game exclusively on iOS for a...

In the all-new Toy Box 2.0, players will be able to use Iron Man, Thor, Black Widow and all of The Avengers...

Merida and Maleficent in Disney Infinity 2.0

Merida and Maleficent are playable in the all-new Toy Box 2.0 mode of the game, along with all characters...

The two companies officially revealed details and images for a special opportunity just for PlayStation owners -...

The sequel to 2013's hugely successful new family IP expands the platform with the introduction of all new...

Donald Duck will be available in Australian and New Zealand retail stores this Spring. The .All for One. Power...