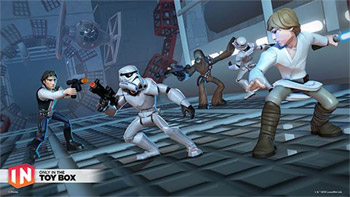 Disney Interactive has launched the all-new Toy Box Expansion Games for Disney Infinity 3.0, the latest installment in the highly successful Disney Infinity 'toys-to-life" franchise. The two new games, Toy Box Takeover and Toy Box Speedway, will be available in Australian and New Zealand stores for a suggested retail price of $24.95 AUD/$34.95 NZD each and will give players additional hours of gameplay inside Toy Box 3.0.

Players place a Toy Box Expansion Game Piece on the Disney Infinity 3.0 Base to unlock pre-built games that instantly take them into the action, mixing and matching characters from across The Walt Disney Company. Toy Box Takeover is an action-adventure game that features multiplayer gameplay allowing players to use all of their favorite Disney, Star Wars™, Marvel, and Disney•Pixar characters. Toy Box Speedway is a kart-racing game that will allow fans to see who truly is the fastest of all vehicles and characters.

'The Toy Box is where players have the freedom to choose from a variety of gameplay options and create their own style of play using any character figures from their collection," said John Blackburn, SVP and General Manager, Disney Infinity. 'The Toy Box Expansion Games further extend that experience with multiplayer structured gameplay where families can play together, mixing and matching some of their favorite Disney, Star Wars, Marvel and Disney•Pixar characters."

Toy Box Takeover - When Syndrome gets his hands on Merlin's magic wand, it's up to the player to stop him.  Using their favorite characters in Disney Infinity, they must battle across multiple worlds, such as Pirates of the Caribbean, Marvel's Upper Manhattan, The Old West, or The Incredibles Volcano Lair to defeat the bad guys before they ruin the Toy Box forever. Family and friends can play together via two-player local co-op or four-player online.

Disney Infinity 3.0 Video Game and Base are required to play the Toy Box Expansion Games. Toy Box Takeover and Toy Box Speedway will be sold separately at the suggested retail price of $24.95 AUD/$34.95 NZD each.