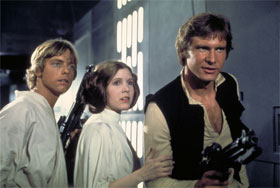 More than 10 Hours of Bonus Materials Join the Classic, Newly Remastered Films in a Four-Disc Set that Includes a Brand-New, Feature-Length Documentary and Behind-the-Scenes Featurettes

Available in widescreen, the three films in the STAR WARS TRILOGY - Episode IV A New Hope, Episode V The Empire Strikes Back and Episode VI Return of the Jedi - have been newly restored and remastered by renowned Lowry Digital Images.

A fourth disc in the collection includes an additional four hours of added-value material that brings remarkable new depth and insight into the making of the three films and the broader Star Wars Saga.

The cornerstone of this fourth disc is EMPIRE OF DREAMS: The Story of the Star Wars Trilogy. The two-and-a-half hour documentary traces the evolution of Star Wars from a low-budget, labor-of-love space saga to a movie phenomenon that defied the odds and reinvented the rules. At its core, EMPIRE OF DREAMS tells the story of an independent filmmaker who had to innovate and invent an entirely new way of creating motion pictures.

Featuring all-new interviews with Lucas and more than 40 members of the cast and crew from all three films, EMPIRE OF DREAMS also includes appearances by a host of filmmakers and media personalities, along with never-before-seen behind-the-scenes footage from the making of the three films. This new documentary brings viewers the most comprehensive look at a pioneer who triumphed against the odds to create an enduring modern fairy tale that has captivated the world.

Additionally, the fourth bonus disc offers a host of other exciting features, including: