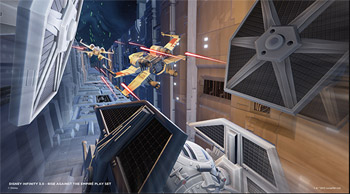 Disney Interactive today released new information and assets for Star Wars™ Rise Against the Empire, one of three Star Wars Play Sets to be released for Disney Infinity 3.0 this year.  Developed by Studio Gobo, in partnership with Avalanche Software, the game takes iconic moments inspired by the original Star Wars trilogy, Episodes IV-VI.

Non-stop, action-packed adventure awaits players as they explore open world planets like Tatooine on foot or on a Bantha, take down AT-AT walkers aboard a snowspeeder on Hoth, out-maneuver stormtroopers on a speeder bike on Endor, and partake in epic space battles in an X-wing starfighter to destroy the Death Star.

A Play Set based on Disney•Pixar's upcoming film Inside Out and a Marvel Play Set featuring Hulkbuster, Ultron, and other Marvel characters will also be available. Additional Disney Infinity 3.0 figures and Play Sets will be announced in the coming months.

Disney Infinity is an interactive gaming platform where players have unprecedented freedom and endless opportunity to create stories and play experiences starring the beloved characters from across the worlds of Disney. Building on the success of launching Disney Infinity 1.0 and 2.0, Disney Interactive announced its latest installment to the best-selling 'hybrid toy/video game," Disney Infinity 3.0. In its third iteration, players will again utilise real-world interactive figures to activate original storylines (Play Sets) in the virtual game worlds of popular Star Wars franchises and create new adventures with a variety of characters from Marvel, The Walt Disney Co. and DisneyŸPixar properties in the Toy Box mode. Disney Infinity 3.0 will be available in stores this Winter. For more information, visit Disney.com/Infinity.

Thanks to Warner Home Video here is your chance to win one of 10 x Star Wars: the Clone Wars- The Complete... 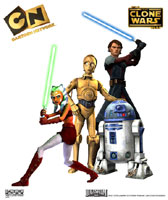 To celebrate the release of Star Wars: The Clone Wars series premiering on Cartoon Network, here is your chance... 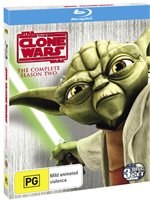 Star Wars The Clone Wars Season 2 -As the fight for peace plunges further into the galaxy, the heroic Jedi are...

Players live life on the dark side by joining Emperor Palpatine and Darth Vader on a mission to attract more...