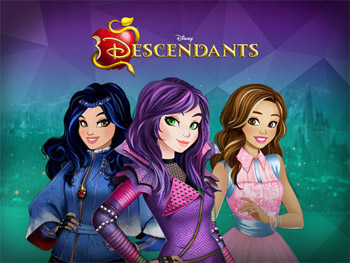 Disney launches Descendants, the official mobile game inspired by the hit Disney Channel movie, Disney's Descendants, available on iOS, Android and Windows devices. In Descendants, fans can create their own unique Descendants character and then join Mal, Evie, Jay, Carlos and more of their favourite characters for a wickedly fun adventure in the world of Descendants. As they play, fans will be able to experience all the iconic locations from the movie from Isle of the Lost and Auradon, such as the Gallery of Villains and Tourney Field.

Players will start the game by creating their own stylish avatar with more than 450 pieces of clothing and accessories inspired by the movie. As players unlock iconic locations in the game, they will discover fun quests like organising school parties with Mal and tailoring costumes with Evie for a play. Players will collect special rewards along the way that will raise school spirit and help grow their -Legendary' status.

Style showcase: Players can create their own unique character and stand out from the crowd with millions of fashionable combinations, from stylish Auradon preppy to edgy Isle style.

Exciting missions: As they progress through the game, players can organise school parties with Mal, tailor costumes with Evie for a play, and unveil more exciting quests with the help of the coolest students at Auradon Prep.

Be legendary: Players can collect special rewards along the way to raise school spirit and grow their -Legendary' status.

Explore Auradon: Ride on Ben's scooter to travel between locations and uncover iconic areas such as the Tourney Field, Gallery of Villains, Carnival Grounds and many more.