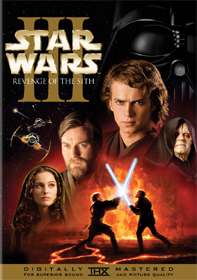 The Ultimate Star Wars CelebrationRocks the Galaxy (November 2, 2005) With Simultaneous Debuts of Revenge of the Sith DVD and Star Wars Battlefront II Game

SYDNEY, Australia. (July 27, 2005) - The epic intergalactic adventure of the Star Wars saga is finally complete, and audiences can celebrate the unforgettable fun and thrills of STAR WARS: EPISODE III REVENGE OF THE SITH when the year's biggest box-office hit debuts November 2, 2005 from Twentieth Century Fox Home Entertainment and Lucasfilm Ltd. The simultaneous release of Star Wars Battlefront II™, the sequel to the best-selling Star Wars video game of all time, makes November 2, 2005 a milestone day in Star Wars history.

The two-disc REVENGE OF THE SITH DVD will include a brand-new, full-length documentary produced by Lucasfilm Ltd.; two new featurettes - one exploring the prophecy of Anakin Skywalker as the Chosen One, the other providing an in-depth look at the movie's eye-popping stunts; and a 15-part collection of Lucasfilm's groundbreaking "web documentaries."

"REVENGE OF THE SITH gave audiences an extraordinary experience and wewant this DVD to do the same," said Jim Ward, Vice President of Marketing and Distribution for Lucasfilm Ltd. "From the beginning of production, George wanted to be sure we chronicled everything that went into the making of Episode III specifically tocreate an incredible DVD experience. This DVD has literally been three years in themaking and it's going to be a fantastic way to complete the Star Wars saga at home."

Adding to the in-home Star Wars adventure is the release on November 2, 2005 of the eagerly anticipated Star Wars Battlefront II from LucasArts - the sequel to the best-selling Star Wars video game of all time. Star Wars Battlefront II adds all-new space combat, playable Jedi characters, and never-before-seen environments straight out of Star Wars: Episode III Revenge of the Sith. The game will be released for the PlayStation®2 computer entertainment system, Xbox® video game system from Microsoft, Windows™ platform and Sony PSP™. Fans of the original Star Wars Battlefront will also enjoy an all-new single-player experience that takes players through an epic, story-based saga centering on Darth Vader's elite 501st Legion of Stormtroopers where every action the player takes impacts the battlefront and, ultimately, the fate of the Star Wars galaxy.

The REVENGE OF THE SITH DVD will offer access to a special Xbox-playable demo of two entire levels from LucasArts' Star Wars Battlefront II.

"The combination of Revenge of the Sith on DVD and Star Wars Battlefront II makes November 2, 2005 a watershed day for Star Wars fans. It's really going to be a terrific celebration of the entire saga," Ward said.

The DVD release of STAR WARS: EPISODE III REVENGE OF THE SITH marks the first time that fans can own all six episodes of the saga. "After seeing REVENGE OF THE SITH, moviegoers around the world told us that they immediately wanted to watch Episode IV to see how the entire saga comes together, and now they'll be able to do just that, making the Star Wars experience richer and more exciting than ever," Ward said.

In REVENGE OF THE SITH, the Clone Wars rage, widening the rift betweenChancellor Palpatine (Ian McDiarmid) and the Jedi Council. Young Jedi Knight AnakinSkywalker (Hayden Christensen) is caught in the middle, his allegiances torn. Seduced bypromises of power and temptations of the dark side, he pledges himself to evil Darth Sidious, becoming Darth Vader. Together, the Sith Lords set in motion a plotof revenge against the Jedi. Obi-Wan Kenobi (Ewan McGregor) tries to turn Anakin back to the light side, leading to a climactic lightsaber battle that will decide the fate of the galaxy.

More than 7,000 pages of information about the Star Wars saga can be found at http://www.starwars.com. Lucasfilm Ltd. is one of the world's leading film and entertainment companies. Founded by George Lucas in 1971, it is a privately held, fully integrated entertainment company. In addition to its motion picture and television productions, the company's global businesses include Industrial Light & Magic and Skywalker Sound; LucasArts Entertainment; Lucas Licensing; and Lucas Online. Lucasfilm's feature films have won 19 Oscars and its television projects have won 12 Emmy Awards.