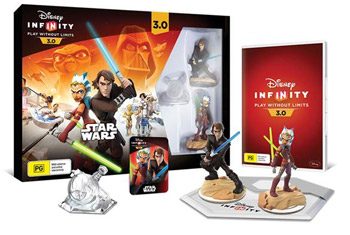 Available at a suggested retail price of $99.95 AUD/$119.99 NZD the Disney Infinity 3.0 Starter Pack includes the Disney Infinity 3.0 video game software and base, the Star Wars™ Twilight of the Republic Play Set piece, Ahsoka Tano and Anakin Skywalker character figures, and a web code card that unlocks content for PC and mobile devices.

'Disney Infinity 3.0 is the only video game that brings together the most iconic stories and characters from across The Walt Disney Company, offering a family gaming experience unlike any other," said James Pitaro, Co-Chairman, Disney Consumer Products and Interactive Media and President, Disney Interactive.

In addition to new, original true-to-property experiences in the Play Sets, Disney Infinity 3.0  features an updated and improved Toy Box mode where families can mix and match some of their favorite Star Wars, Disney, Disney•Pixar and Marvel characters and play with them together. A newly enhanced Toy Box Hub makes it easier for players to choose from a wider selection of gameplay experiences – including platforming, racing and farming simulation games.

'This year's edition offers one of the most complete Star Wars gaming experiences ever created, as well as a wider variety of gameplay than any previous edition of Disney Infinity."

The Disney Infinity 3.0 Starter Pack is now available in major Australian and New Zealand retail stores for the PlayStation®4 and PlayStation®3 computer entertainment systems, Xbox One and Xbox 360 and the Wii U™ system from Nintendo.  Disney Infinity 3.0 is rated PG for mild violence and online interactivity and developed by Avalanche Software in partnership with Ninja Theory, Sumo Digital, Studio Gobo and United Front Games.

Star Wars Rise Against the Empire will take players on galaxy-spanning missions with legendary Jedi Luke...

Disney Interactive announced that the Disney Infinity 3.0 Starter Pack, featuring the Star Wars™ Twilight of the...

Disney Interactive is the digital entertainment part of The Walt Disney Company. As one of the world's largest...