Fallout 4, the legendary post-apocalyptic adventure from Bethesda Game Studios and winner of more than 200 'Best Of' awards, including the DICE and BAFTA Game of the Year and Best Virtual Reality Game at Gamescom, finally comes in its entirety to VR. Fallout 4 VR includes the complete core game with all-new combat, crafting, and building systems fully reimagined for virtual reality. The freedom of exploring the wasteland comes alive like never before.

Bethesda Game Studios, the award-winning creators of Fallout 3 and Skyrim, welcomes you to the world of Fallout 4. Winner of more than 50 Game of the Year awards, including top honors at the 2016 D.I.C.E Awards. Fallout 4 is the studio's most ambitions game ever and the next generation of open-world gaming. As the sole survivor of Vault 111, you enter a world destroyed by nuclear war. Only you can rebuild and determine the fate of the Wasteland.

Hostile alients have overrun the Talos I Space Station and you must use mind-bending powers and unique weapons to decide the fate of humanity. Prey is available on Playstation 4, Xbox One and PC. 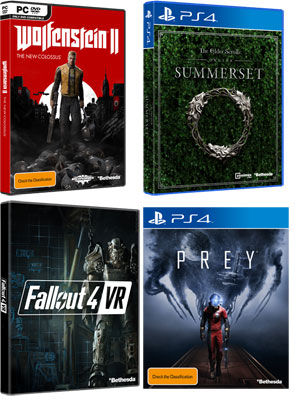 An exhilarating adventure brought to life by the industry-leading id Tech 6, Wolfenstein II sends players to Nazi-controlled America on a mission to recruit the boldest resistance leaders left. Fight the Nazis in iconic locations such as small-town Roswell, New Mexico, the flooded streets of New Orleans, and a post-nuclear Manhattan. Equip an arsenal of badass guns, and unleash new abilities to blast your way through legions of advanced Nazi soldiers, cyborgs, and über soldiers in this definitive first-person shooter.

For the first time in history, the long-closed borders of Summerset are open to foreigners by decree of Queen Ayrenn. But darkness looms over the ancestral home of the High Elves, and whispers stir of Daedric followers organising in the shadows. Rally your allies, brave champions. Summerset awaits.

Developed by id Software, in conjunction with Saber interactive, Quake Champions is a return to the frenetic, fast-paced competition that established Quake as the originator of the multiplayer shooter genre more than 20 year ago. Quake Champions delivers the dark mythos of the first Quake combined with the groundbreaking multiplayer mayhem of Quake III Arena with a major modern twist – Champions. These fierce warriors each wield attributes and abilities, enabling players to compete in their own distinctive style, while adding an additional layer of strategy to the game.