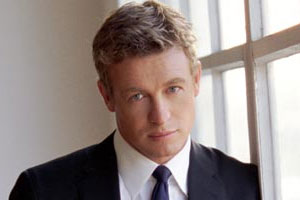 EXCLUSIVE Simon Baker/Book of Love, The Guardian Interview by Paul Fischer at the Sundance Film Festival.

It was the world premiere of Aussie actor Simon Baker's latest film, Book of Love, co-starring fellow Australian Frances O'Connor. At the Sundance Film Festival, Baker was present with his wife of 12 years, Rebecca Rigg. As we chat in a Park City hotel room, the actor says that Rebecca still remains his harshest critic. "My wife is an incredibly good gauge for me, because of that."

Book of Love is an unflinchingly honest portrait of a marriage in crisis, and involves some very intimate moments with co-star O'Connor. One wonders how it feels to be sitting with one's wife, watching scenes of sexual intimacy. Baker pauses slightly. "It's really hard to watch anyone you know really well on screen and really get suspended. In Book of Love, I made my wife laugh and cry, and that moved me in itself. That means I did my job." While Book of Love deals with a marriage in crisis, no such crisis exists off screen for Baker. Now married to Rebecca for 12 years, and father of three, the actor says that they have survived "because we love each other." Yet Baker admits that it's not easy to put everything in perspective: the strong marriage, the family and of course the career. "This film says that any relationship is difficult and the ones that look the easiest from the outside, are often hardest from the inside," Baker concedes.

Baker says there was no question why he was keen to play the infallible husband in Book of Love. "What's not to like about a character like this from an actor's perspective? It's such a great character." Nor did Baker have difficulty identifying with him. "I think every man can identify with him and that's what got ME. Mate, I'm in heaven with a character like that, because it's why I became an actor," Baker says. "It's a way to speak to people without sitting down and having a chat with everyone. It's a way to be able to speak to them and have people speak to themselves, try to question themselves and try to understand stuff. Films can be really powerful and don't HAVE to be massive extravaganzas. They can be incredibly personal. This character's a great arc and journey. It's probably the first time I can ever say that the character on the screen is exactly the way I was trying to do it."

Now star of the popular TV series The Guardian, Baker has resisted making big Hollywood movies, preferring, he says, to do what he wants to do, rather than what he NEEDS to do. "I make the money on the show, so that doesn't factor into it. I do a project like Book of Love because I want to", he says, matter-of-factly. "I'm not an actor because I have a need to see my name up in lights or because I want to be a multi-millionaire. I do it because I've got something in me that has to come out. Unfortunately, to get those opportunities, you have to have something." Baker also concedes that he has to make some acting choices based on survival. "I have to balance art and commerce. I am an artist, that's who I am, and everything I do, whether it's a shit movie or whatever it is, I still try to do the best I c an and express whatever. But at the same time, I have a wife and three kids and I have to support them. I'm not in a position where I can dance around all over the globe." Baker honestly admits that he agreed to do The Guardian for very pragmatic reasons. "It was like, fuck mate, you've got kids, you're an actor, and if you're not in that top tier, living like a king, you're a gypsy and all over the place, never knowing where your next pay cheque's coming from. Not only that, you're always going to be pulled away all over the place away from your family. I did The Guardian for a sense of stability in my life." Now in its third season, Baker surprisingly admits that he has no idea whether the show has been picked up for a fourth, or indeed, how it is even rating. "I don't even look at that stuff anymore, because it's got nothing the fuck to do with me. I either enjoy the work or I don't, and if I do an episode I'll get paid for it." Clearly, the actor is "I have ups and downs with it, mainly because it's such a different system. I much prefer doing the work as I did with Book of Love, because it's more creative freedom and not filtered by what affiliates or studio executives that are all involved in shaping what it is," Baker says. "What it is, is what it is and I can work in that medium and that's fine, but as an artist, I prefer Book of Love, because it enables me to be free."

For Baker, there's well and truly life after The Guardian. Rather than fame and fortune, the actor says he wants to do just good work, and be a good husband and dad.