Simon Baker Land of the Dead 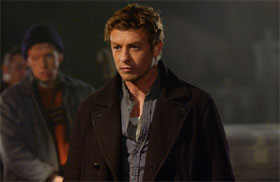 Simon Baker/Land of the Dead Interview

by Paul Fischer in LosAngeles.

Wearing black, thick-rimmed glasses, Australias Simon Baker, best known toUS audiences for his stint in TVs The Guardian, says that he was attractedto the politically-charged zombie thriller, Land of the Dead, for a varietyof reasons, especially the chance to work with its legendary director,George A. Romero, as well as because it means doing something he has neverdone before. "You know, its a part of both of those reasons," Bakerexplains, as we chat in a Beverly Hills hotel room. "I was never a fan ofthe genre or any genre specifically, but I like movies. If its a goodmovie I like it, so I met with George and I really liked him and that was it Then I went, looked at all of his films again, started thinking about themand realised what he was doing with these films, which ultimately factoredinto it as well," comments the 35-year old actor. In the 4th instalment toGeorge Romero's "Night of the Living Dead" series, and his first zombie filmin two decades, the zombies have taken over the earth. The surviving humanslive on a small secluded strip of land, with two sides cut off by rivers.The humans strive to survive, while outside the zombies are steadilyevolving. The wealthy live in sealed skyscrapers as the poor fend forthemselves on the streets. Protecting them is an enormous tank called DeadReckoning, controlled by a group of people led by Simon Bakers Riley. Butwhen Riley loses command of the tank to his second-in-command bent ondestroying the city, he must save it from Dead Reckoning as those who walkbeyond the walls of the city slowly develop new abilities and become a muchgreater threat to humankind.

While all Romeros films are part thriller and part social and politicalcommentary, Baker sees that as being the underlying link between this latestfilm and its cult-like predecessors. "I think, politically, the time is soright for a film thats able to actually reflect certain odd areas of whatour society is at the moment. He hasnt made a zombie film since the 80s,so a lots happened. Its just good timing and its hard to make movies thatcomment on things politically without them just becoming either adocumentary or like a negative propaganda machine. This is an entertainingfilm in its own right, but it also has a little stab here and there whichare very accurate. You can sort of scratch the surface and look a littledeeper if you wish to, yet he doesnt shove it down your throat."

For Baker, who has always excelled in playing introspective characters, thechallenge for him playing anti-hero Riley, is making him interesting. "Wellhes incredibly flawed, you know. But what really drew me to the character,was that he was a kind of a contradiction in a sense. When you look at thefilm hes not exactly the most exciting character in it, because his dilemmais more of an internal one, where Leguizamo s is just the opposite, in thathe wants wealth and to live this lifestyle thats being sold. Ideally Isort of wanted to play the guy as a pacifist so automatically he was goingto be separated from Leguizamo, and automatically theres conflict withinhim because of the nature of all hes forced to do for a living. I also sortof tried to play around the ideas of kind of classic nouveauish things incharacters, of him wanting to find a better place. These are all verypersonal little things that I could play within the character, but whetherthey translated or not, Im not so sure." As to whether Baker can identifywith his characters, the actor pauses slightly. "There are always elementsthat you can identify with in playing certain characters," he begins. "I cancertainly identify with the politics of the guy. Hes the guy that fits intothe grey area, which, when you look at things these days, such as the media,etc, this character is almost disappearing off the face of the earth. Whenyou look at the propaganda its like youre either good or bad, and theresno one thats grey: youre black or white."

The Tasmanian-born actor began making a name for himself in local TV soaps EStreet, Home and Away, Naked and 1994s Heartbreak High. In 1992, he firstmet actress Aussie actor Rebecca Rigg in a Sydney pub. He ultimately became quite fascinated by her - a case of opposites attract, having once beenquoted as remarking "I am a country bloke and she's a city chick. I am asort of surfie who's pretty laid back and relaxed and Rebecca is theenergiser." On Christmas Eve, 1995, the young actor finally arrived in LAwith Rebecca and first child Stella, with $3500 in his pocket. Then helanded a small, but pivotal role, in L.A. Confidential, followed by roles inindependent films, before 2001s The Guardian landed in his lap, and Baker,who lives his Malibu with his wife and now three children, hasnt lookedback since. Though The Guardian was a god experience, Baker has no regretsabout its demise. "It was a good experience for me on the basis of justbeing able to put in that many hours. It was interesting pulling scriptsapart, putting them back together and shooting, and that was good, just likeboot camp for three years." The downside, however, was the hours that keptaway from his family. "Man, it was a drain and thats where the relief comesfrom, not actually being owned for a little bit. Like, now, I can have theday off, some time off, a week or a month off. The pressures of workingthose hours and dealing with my family were tough," he admits.

Baker says he wont necessarily rule out a return to television, butconcedes he has never had any clear direction, as far as his career isconcerned. "If you look at my career, Im not exactly good at the businessof: okay, now I should do this or now I shouldnt do that. I think thatsbecause Im a little too erratic, and, depending on certain moods and how Ifeel at certain times, certain things appeal to me in a different way." Italso seems that the actor has consciously gone out of his way to do big,Hollywood movies, merely admitting that "the reality is, those opportunitieshave never really presented themselves to me." Yet, while Baker could havetaken advantage of the success of L.A. Confidential, he chose not to belured by the prospects of fame and celebrity. "I certainly dont crave whatyou have to give up for that." He says he is content to be where he is, inHollywoods scheme of things. "I kind of fly under the radar pretty well,and I appreciate that." Asked if it is that sense of reality that keeps himgrounded, Baker says, "I dont know, mate, I dont analyse that somuch, I possibly think so."

Next, Baker will be seen in another new Indie film, 42.4 Percent, revolvingaround a professional black woman, determined to get married, who findsromance with a white working-class man. "its an interracial love story anda very sweet movie." Baker also hopes that the Indie film Book of Love,which premiered at Sundance 2 years ago, will get a release. The filmco-stars fellow Aussie Frances OConnor, and explores infidelity andcommunication in a marriage that is falling apart. The film involves somevery intimate moments with co-star OConnor and the actor recalls firstseeing the film at Sundance, seated next to his wife and watching him andOConnor in some very torrid, on-screen moments. "Its really hard to watchanyone you know really well on screen and really get suspended. In Book ofLove, I made my wife laugh and cry, and that moved me in itself, which meansI did my job." While Book of Love deals with a marriage in crisis, no suchcrisis exists off screen for Baker. Now married to Rebecca for over 12 years and father of three, the actor says that they have survived "because welove each other." Yet he admits that its not easy to put everything inperspective: the strong marriage, the family and of course the career. "Bookof Love says that any relationship is difficult and the ones that look theeasiest from the outside, are often hardest from the inside," Baker concedes The actor adds that there was no question why he was keen to play theinfallible husband in Book of Love. "Whats not to like about a characterlike this from an actors perspective? Its such a great character." Nor didBaker have difficulty identifying with him. "I think every man can identifywith him and thats what got ME. Mate, Im in heaven with a character likethat, because its why I became an actor," Baker says. "Its a way to speakto people without sitting down and having a chat with everyone. Its a wayto be able to speak to them and have people speak to themselves, try toquestion themselves and try to understand stuff. Films can be reallypowerful and dont HAVE to be massive extravaganzas. They can be incrediblypersonal. That character has a great arc and journey. Its probably thefirst time I can ever say that the character on the screen is exactly theway I was trying to do it."

Simon also hopes to do some more work back in Australia, and concedes thatmoving back is an option. "We go in and out of it all the time, where itslike, okay, lets go, lets pack it up lets go back and Ill just travel."And at this stage, Baker says, he is happy to take a break and spend timewith his family. "Oh, man, after three years of doing a TV show and thengoing straight on to three movies back to back, Im looking at scriptsreluctantly," he adds, laughingly.

LAND OF THE DEAD OPENS AUGUST 11.