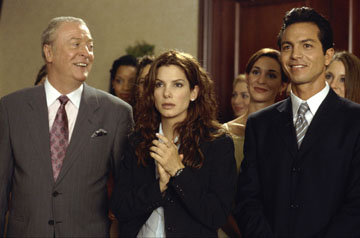 DOWN TO EARTH: THE CONGENIAL MS BULLOCK

In her latest movie, Miss Congeniality, Sandra Bullock is back to form in the genre with which she feels right at home: Comedy. And the film's title lives up to her own off screen image, as Paul Fischer discovered when he met the star in Los Angeles.


Sandra Bullock apologises for the plethora of coffee stains that remain scattered on her T-shirt. "The one thing me and this latest character have in common, is we're both slobs", Bullock says laughingly. "But since this is for print, I don't have to make that extra effort to get all pretty and made up. I can just get out of bed and come straight here to be interviewed." That's Sandra, or Sandy, as everyone calls her. Down to earth, unphased and almost ridiculously grounded. One can only wonder how she keeps so sane amidst this Hollywood insanity? "Well, Prozac helps." Not to mention "just getting your ass kicked enough times and REALISING you're getting your ass kicked." Bullock also insists that in this life, "the only person who's going to be able to give it to you is you. And do not expect anything. I don't know how you get over that, because it's drilled into us, those expectations: THIS is the way you have a family, THIS is the way you have a relationship, THIS is how you work. I think we set our kids up for disappointment. If we just say to our children: Embrace yourself, accept people for who they are - it might not be what you like - but do not expect anything or anyone to act or be a certain way. I'm telling you, each time I've sort of let go of expectations and just said to myself: OK, what's going to happen will happen, it's always worked out the way it's supposed to." Yet as big a star as she is, her movie career has had its share of disappointments. As long as you don't call them 'failures'. "I don't like the word failure because, what is that? I mean, I think kids shouldn't hear it and adults shouldn't use it."

Which is why Bullock produces many of her films, that way the buck stops with her. She wore that hat, as well as star, during production of Miss Congeniality, for instance. "I think when I'm allowed to be as involved as I am, I know that every stone has been unturned, every option that I could come up with, or every thought that I was able to have at that moment, was what I was able to give, then I feel confident that I couldn't do any more. Now in hindsight, the last day of shooting Miss Congeniality was like: I wish we'd done this and this. Every day I would go further. I would want to change something. But, you know, at least this way I know I did everything I possibly could. And you can really put it to bed, rest and move on."

In the comedic Miss Congeniality, Bullock plays a smart but clumsy female FBI agent, who happens to be a huge tomboy, and ends up going undercover in a beauty pageant in order to investigate a serial psycho case. Opposed to the idea at first, the "ugly duckling" eventually begins to appreciate some of the finer points of being a lady during her transformation, while continuing to work on the case. Owing something to Shaw's Pygmalion (Michael Caine being the perfect Henry Higgins}, Bullock loved that about this script. "I always love that aspect in films because you can only do so many stories, but I think people love to see how the main character is going to get from A to Z and it sets up good situations. In a film like this, you have two opposite worlds which is ripe for jokes, and how to cleverly combine that with dialog that you don't expect, with characters that each have their own little journey, is all in the script." In the film, Bullock gets to be both tomboy and pretty woman. She feels perfect for the role because, though she is at home as a tomboy, can relate to both facets of the character. "I can relate to being a tomboy and playing with the boys and I can also relate to being a girly girl, just wanting to be around girls and talk incessantly."
In this movie, actions speak louder than words. While very much character-driven, Miss Congeniality is also a physical comedy, which appealed to the actress's comedic side. "They don't write scripts for girls to do that, the way they did in the forties. All the great women of film could be elegant but they could also fall on their face, as in The Philadelphia Story. 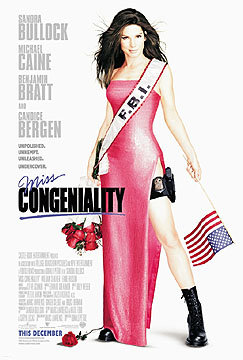