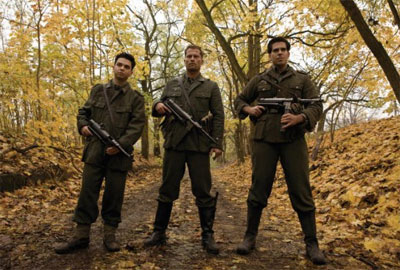 SAMM IS ONE BASTERD.

Relative newcomer Samm Levine may no longer be all that new after Friday's release of Tarantino's Inglourious Basterds, with the young actor playing one of the Jewish basterds, Hirschberg. Levine talked to Paul Fischer in this exclusive interview.

QUESTION: When you audition for Quentin Tarantino, what is the process?

SAMM LEVINE: Well, the process with Quentin is very unusual. First I'd heard that he was doing general meetings with young actors. He wasn't reading anybody, he just wanted people to come in and say hello, which is really unusual. And I'd already met Quentin a number of years before, so I felt good about the ability to get a general meeting. So, I did. I got one. I went in, and - you know, we just sort of chatted for a few minutes. It was Quentin and the casting director. And your casting directors. And - we just sort of chatted for a few minutes about this and that. He asked me what was going on. We didn't really even talk about the script, because he hadn't - officially, they weren't officially giving it to actors yet, even though it was already out there. And I'd read it. But yeah, we just talked for about ten minutes. And he said, you know, "Thanks for coming in." And that was on a Friday. And then that afternoon, we'd gotten the call that he wanted me to come in and read for one of the characters on Monday morning.


QUESTION: Was it always the character of Hirschberg that you were reading for?

SAMM LEVINE: No, it was not, actually. The first character he wanted me to read for was Utivich, the character played by BJ Novak. And so I spent all weekend studying the Utivich lines, and then went in on Monday, and I read the Utivich lines with Quentin - and this is the other part that's unusual. When I say "With Quentin," I literally mean with Quentin. He did not have the casting associate read, and he watched. He read the scenes with me.

SAMM LEVINE: Yeah. He played all the other characters. And so - we did that for about ten minutes or so. And then he says, "You know what? I kind of want to see you read Donowitz." I said, "Okay." And so then he gives me the Donnie Donowitz sides, played by Eli Roth, and I had a few minutes to look at them, and then we launched into this whole scene. And we spent a good 'nother ten, maybe 15 minutes working on that. And after those two - I read those two characters, you know, he said, "Thanks for coming in. This was really great." And - you know, "Talk to you soon." And then I left, really not knowing anything. And then about two weeks later is when we got the call that they wanted to offer me Hirschberg, the role I didn't read for. Well, that's why this business is a crazy one.


QUESTION: What did you think of Hirschberg, when you finally got a chance to study him?

SAMM LEVINE: I loved the character. I thought Hirschberg was great. You know, I kind of liked - it wasn't really necessarily in the script. But as soon as we started rehearsals, I realized that he was kind of a gun-crazy guy. He was a little trigger-happy. And - you know, he just - in the original script, more so than the finished product, he was a little bit more quippy. He had a little bit of one-liners in him.


QUESTION: How much of that was improv'd?

SAMM LEVINE: Very little. Quentin wrote a pretty tight script. There was not a lot of reason for me to have to come up with - you know, alternate takes, and stuff. Although there were a couple of scenes where Quentin actually heavily encouraged all of the actors to improv. You know, "Maybe say this, maybe say that thing. I don't know, run with it."


QUESTION: I guess he hired - I mean, from what I can gather, he seemed to have hired a lot of Jewish actors to play the Basterds.

SAMM LEVINE: Yeah. That was very important to him.


QUESTION: Why do you think that was? Because it's very unusual.


QUESTION: Interesting. Because it's important to him to remain ethnically accurate, yet historically skewed.

SAMM LEVINE: Yes. Well, I don't think he's ever talked about the film as - you know, "Based on a true story." Or [LAUGHTER] - or anything like that. I think he proudly declares it as a work of fiction.


QUESTION: Well, as a Jewish actor, was there, in your own mind, any sense of dichotomy about what the film was saying about Jewish characters, in this particular story?

SAMM LEVINE: I don't know that he was making any sort of statement like that. I think it was - a lot of Quentin's films have the same theme of revenge, and I think that's what this one was, at least for the Jewish characters. This was the revenge the Jewish characters never really got to have on the Nazis. And Quentin felt like they deserve their day to have their revenge. And - you know, that's a large portion of the reason he wrote this.


QUESTION: What was the experience like, working with him? Was it what you expected?

SAMM LEVINE: You know, it was a little bit of what I expected, and a little bit of stuff I never could have expected. I like to refer to Quentin as the Mad Genius. Because - you know, for all the stories you hear about, you know, "He's crazy on set." I don't know that I saw much of that. But, he is brilliant. The choices that he makes, the direction that he gives his actors was very - unique. I know unique doesn't need a qualifier, but. You know, it's something that was so just Quentin. I wish there were a better way of describing it, but you kind of have to be there with him.

SAMM LEVINE: That's a good question. And I tell you, if I had a great answer for you, I feel like I would have done it by now. [LAUGHTER] But, I don't know. You know, it's - everyone has their own thing, that only they can do. You know? There's got to be that one character that comes up, that when you play that character, you're the only person who could have played the character that way. And when that happens, when that magical click happens, the right actor finding the right part in the right film or television show, that's where I think you can get bumped up to that next level.


QUESTION: Is it more luck than talent, or is it equally divided?


QUESTION: [LAUGHTER] You have completed a couple of roles in some ensemble films. Tell me about Drones.

SAMM LEVINE: Drones is a very quirky little sci-fi comedy film that I shot about a year ago, with some friends. They made the film for about $9. I tell you, I've never worked on such a low-budget film. But you never, ever would have known how low the budget of this film was, based on the quality of work we were putting into it, and how great the finished product looks.


QUESTION: What do you do with a film like that, in terms of trying to get it out there?

SAMM LEVINE: I know that the producers have high film festival hopes for the picture.


QUESTION: So, they're going to try to submit it to Sundance, and those kinds of festivals?

SAMM LEVINE: I think so. Probably Sundance. You know, I think there are a couple of more maybe sci-fi-themed festivals that they might be skewing towards. I'm not 100 percent sure what they plan to do with it, but I do definitely know that they are - they're not just going to sit on it. They want it to be seen and released.


QUESTION: What kind of character do you play?

SAMM LEVINE: I play a character named Clark, who is the best friend of the lead character. And my character, Clark, is an alien. Who, of course, looks just like everyone else, because he's wearing his human skin. But - you know, he's just been hanging with his best friend, who he works with, for a good number of years. And then one day, his best friend accidentally walks in on Clark in the closet as he's communicating with his home planet. And hilarity ensues.


QUESTION: You have a role in Columbus Circle as well, I understand.

SAMM LEVINE: I do, yeah. I have a small part. I play a bank manager at the - in Columbus Circle. Which was a lot of fun. I mean, to be able to say that I'm included in the film with a cast - you know, like, with Selma Blair and Amy Smart and Beau Bridges, Jason Lee, Giovanni Ribisi, Kevin Pollack. I mean, that's - that's pretty cool for me. That's a great film. Directed by George Gallo. I don't know what they're planning on doing with that, but I have to imagine it'll be something cool. 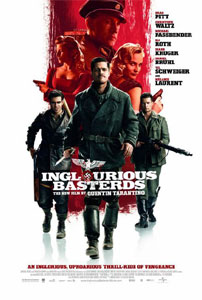 Inglourious Basterds begins in German-occupied France, where Shosanna Dreyfus (Mélanie Laurent) witnesses the execution of her family at the hand of Nazi Colonel Hans Landa (Christoph Waltz). Shosanna narrowly escapes and flees to Paris, where she forges a new identity as the owner and operator of a cinema.

Elsewhere in Europe, Lieutenant Aldo Raine (Brad Pitt) organizes a group of Jewish soldiers to engage in targeted acts of retribution. Known to their enemy as "The Basterds," Raine's squad joins German actress and undercover agent Bridget Von Hammersmark (Diane Kruger) on a mission to take down the leaders of The Third Reich. Fates converge under a cinema marquee, where Shosanna is poised to carry out a revenge plan of her own...