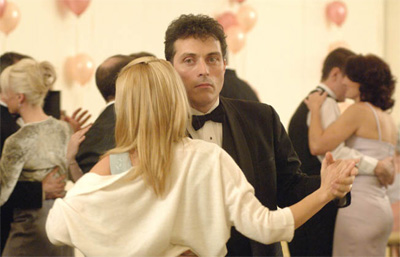 Downloading Nancy was one of the more controversial films screened at last year's Sundance Film Festival. This intense, dark and disturbing film revolves around housewife Nancy (Maria Bello) who, sick of her life and marriage to a controlling husband [Rufus Sewell] she just wants it to be over and done with, but rather than kill herself, she hires a stranger from the Internet to do the job for her. But fate takes a strange turn when she meets her killer (Jason Patric) and the two fall in love. Rufus Sewell talks frankly to Paul Fischer about the film, its themes and the state of his career.


QUESTION: So, this must he been a very tough character for you to get into. And I'm just wondering what the attraction - was it the character, or the nature of the story that interested you?

RUFUS SEWELL: I think, to be perfectly honest with you, I think - why do you think it was a tough character for me to get into?


QUESTION: Well, I guess being such - I mean, do you see him as being a totally unsympathetic character?


QUESTION: Okay. Well, let's start from there. Why?

RUFUS SEWELL: I mean, was there even a totally sympathetic character in this film, by the way? 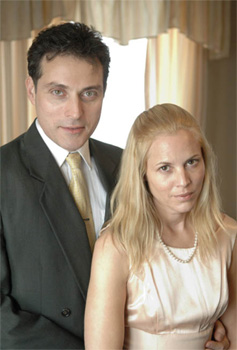 QUESTION: Well, you're right. I mean, that's one of the problems, I suppose.

RUFUS SEWELL: Yeah. Especially one of the problems with a provincial audience.


QUESTION: But, do you think that audiences need to empathize with characters for a film to work?

RUFUS SEWELL: To work commercially, possibly. I don't know. I empathize - I mean, what people empathize with is a matter of what their barriers are, and what the triggers are with them, and what subjects they consider - you know, taboo. And I certainly empathized with my character when I read it. Because I just thought he was a completely lost person, with all of the guilt and fear and - you know, resentments of an old person, but he feels it very, very badly. And his reaction to being with someone in that much pain is, he can't fucking deal with it. He can't see. You know. And he just shuts off. And this is some - you know, you see - it's, unfortunately, the end of a relationship that had a beginning, had a middle, and has ended up in this horrible stalemate, with two people who hold each other in contempt.


QUESTION: When you play scenes like that with Maria, what are the difficulties that you face as an actor, and as a person, to try and create this relationship between - I mean, she's such a nice person, Maria. You're both very nice people. What do you do, to create that sense of emotional detachment that is necessary for this?

RUFUS SEWELL: Well, I think you just try to be as honest as possible. And when I say "as honest as possible," it's as honest and possible about what you are really like. And I know you aren't playing yourself. But each of us, you know, I think if we're really, really honest, can find examples of our own life in which - you might not have done the same thing. But we can find reactions that we've been through, we can find things that we've done, that might have been similar in impulse. Even if on paper, they look completely different. And I can certainly look back at the relationships and see - you know, we've all, one way or another, treated someone badly or been treated badly. Or cut off from someone, or held someone in contempt, or worried about ourselves, when we should have been worried about the other person. Or taken offense when really, we should have seen that someone's in pain. You know, all of those things. And if we're really honest about ourselves, then we can step away from judging the person we're playing. You know? And I think if you step away from that, then it's easier just to be in the moment.


QUESTION: Do you think audiences reacted the way they did to this movie at Sundance because they tend to be too judgmental about these characters?

RUFUS SEWELL: Oh, no, certainly not. Personally, I did find the audience - because I was only at one showing - to be surprisingly provincial. You know. In their reactions. I mean, I don't care if people like it or not, but I'm very proud of the film. I think - you know, succeed or fail, by whichever criteria one uses, it's the kind of project that I would like to continue to succeed or fail in. And I don't mean I need to be in heavy dramas, or I need to play characters like that. I mean, just being challenging, different stuff. You know. 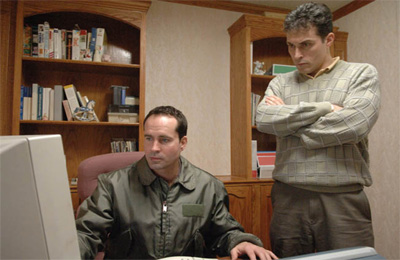 QUESTION: The thing that I loved about it was that it's a film that really did take an extraordinary amount of risks.

RUFUS SEWELL: Yeah. These people - you know, people do have these problems. These things do happen. There are people like that. I mean, it's not - you know, people walk out of this. But they won't walk out of things where much, much worse things happen. It's just the way - the closeness, the unrelenting way in which you're asked to look at it. You know. Maybe we could have put more jokes in. But as far as I'm concerned, I actually - to some extent, as far as the director's concerned, played it for laughs.


QUESTION: What is it that you are looking for as an actor? I mean, you've been in this business now such a long time, Rufus. And you've played such a variety of characters. The older you get, are they harder to find?

RUFUS SEWELL: No, they're getting easier to find, because I think it's taking a very long time for people to realize that I'm not a type. You know, one way or another over the years, people have tried to change their minds about what type I am, and still the occasional wanker will try to tell me what type I am. And I think the older I get, the easier it becomes for people to realize that I'm an actor.

RUFUS SEWELL: I think I was more insistent on the fact that I was a character actor, when I was - growing up, from my 20s. Because I think there was more pressure on me because of the way I looked, to fit into a certain thing. I was very uncomfortable with - I'm a little more comfortable with myself now, and I could actually - quite happy now, the experience I have, of playing leading roles, and romantic roles. But I think I'm kind of a leading character, or character leading. So I think there's a lot of roles like Dark City or Dangerous Beauty, or whatever, that if they were to come my way now, I'd be a lot less frightened of them.


QUESTION: Why did you decide this is a time for you to do television?

RUFUS SEWELL: Because I wasn't being offered anything else. I mean, you know. For me, I felt - I wasn't getting offered anything else that wasn't on a horse, pre-20th century, without at least a hint of a crown somewhere. You know. And for me, the idea - the possibility of showing people that I could exist in a modern idiom, be an American, be possibly a nice guy, was something that might kind of shake things up for me. And the truth is, no matter what people might have said about the season, the series that I did, no one questioned my existence. 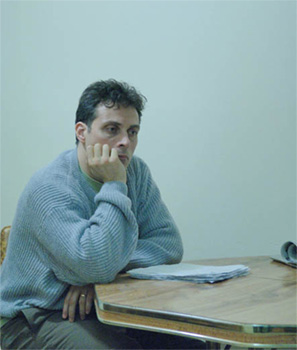 QUESTION: What did the visibility of that television show - what has that done for your career at this point?

RUFUS SEWELL: Oh, probably nothing. I don't know. All I know is that with the advent of it not being picked up, I'm very excited at the prospects of doing other things. But for me - I don't know why I've done most - you know, it seemed like a good idea. And I did discover that I find the prospect of doing one job for a long time a little bit fearsome. So, I feel - even though it's a shame that it didn't get picked up.

RUFUS SEWELL: I do indeed, yes. There's a couple of I've been talking about doing, possibly next year. But for me - I mean, it suddenly dawned on me that if the series was incredibly successful, then the prospect of my future theatre career would look a little bit more difficult. And that scares me. So, I'm quite - though, you know, there were many things about the series that I loved doing, and I liked all the people I worked with, part of me is very excited about it not going on.


QUESTION: What are your plans at the moment? Do you have anything that you're working on?

RUFUS SEWELL: Well, there is a project which is still TV, actually, but it's like a very high-quality mini-series with some really, really good people.

RUFUS SEWELL: Not contemporary, no, but a really, really nice part. So, you know. As it is, I have to express myself and show the different colors I want to show within the realm of what comes my way. And the longest period I've spent unemployed have been waiting for those things, you know? And I will again. And I'm quite ready for that.


QUESTION: Are you as passionate about acting as you were when you were in your 20s?


QUESTION: Right. Where do you think that comes from?

RUFUS SEWELL: Frustration. Also, I think I've kind of developed in a way that I'm very happy about. There've been so many things that could have led to other things, but didn't quite, and surprises and dips, et cetera, et cetera. But I've ended up, I think, getting better, in a way that my love for it, my excitement about it, my enthusiasm for what I do, kind of is greater now. I'm less cynical now than I think I was. I'm less scared.

When Albert Stockwell comes home from work one day he finds a note from his wife of 15 years, Nancy, saying she has gone to see friends. It is a lie.

After waiting several days, Albert realizes that his wife is missing. Nancy has met her salvation on the Internet in the form of Louis Farley. Louis's life, like Nancy's, has become a twisted quest for redemption via smutty chat rooms and alternative websites. Both wounded and alone, Nancy and Louis take comfort in one another through email, pictures and promises.

With Louis, Nancy goes to a different place, one of liberation and fulfillment. Itąs a location where pain is pleasure and where the end is the beginning. While she pursues the freedom that she feels will only come with ultimate liberation, Albert is left to put the pieces together and try to salvage what is left.--©