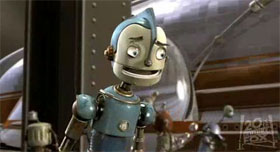 The more one interviews Robin Williams, the tougher it is to keep a straightface. Anyone who has sat with the brazen comic for as long as thisjournalist has, knows it's always a challenge but while promoting his returnto animation, as an anarchic robot headed for the junk heap in Robots,Williams promises to be in control. "It's just really good to see you, sothank you. This is fun to do, an interview like this, 'Oh, hi. Nice to see you again."

Oh yeah Robin Williams is in the house. Here he is in his element, havingreturned to the cartoon world that almost reinvented him a decade earlierwith Disney's Aladdin. He responds unequivocally when asked if he has fundoing animated films. "No shit, dad," he replies, laughingly, adding thatit's all about letting loose and riffing. "And when you have someone with asense of humour like Chris Wedge you know that he'll add more and that he'll give the visual to this."

Of course, a movie such as Robots might begin with the written word, butWilliams will take a script and go off on whatever tangents he feels he canget away with, as he explains in his own inimitable way. "Yeah, Chris goesin and says, 'Here are the lines.' I'll go in and I'll take that and go,'Alright, I'll go off in this way.' Or you have to try different scams andthings because that character basically a street scam artist. So you firstjust try to get inspired for what the voice will be. At first I tried a kindof Bowery guy. 'Are you crazy like that?' Then I'd try like a little bit ofa Homie-bot, like, 'Yo. Yo.' Then I tried to bring it down anddo a little crankpot. 'Yeah, yeah, it's really good.' Then I brought it backand made it slightly off, a little off, but then you kind of get itsimplified because you realize that kids are going to watch it. Then youmodify that for effect and then once you've got the base you can go off. Andwith him and with real animations you can build on it over a period of timeand they add layer after layer and layer. You see the early drawings and yougo, 'Okay. He's got a crank for a head. I like that.' Then, 'Okay. He'sfalling apart. I can work with that.' And these parts are from differentpeople maybe, things he's found. You work off all of that. Then you start tobuild off the fact that if he falls apart he's still going to make it likean alcoholic. [Drunk Character] 'Everything is okay. I'm fine. Shit happens,happen. I have no drinking problem, there's just a lot of alcohol around.'You build off of that."

For Williams, his journey to Toon Town began with Aladdin which won him aspecial Golden Globe Award. "Oh yeah. That was the first time that I couldreally riff. It was like stand-up on film," he recalls. What brought himback to animation, he says, was "seeing them design the world," admits theactor who is all into computer games. "I love computer graphics and have hadPixar envy for a long time," he adds, laughingly. "I guess after 'Aladdin,'we had the falling out with Disney and then the reconciliation, but I think that during that time I missed a lot of chances to work with Pixar and then this camealong and I caught a wave. I got to work with Chris, who's good friends withJohn [Musker] and is, I think, equal on that level of creating worlds, so Iwanted to be a part of it."

The Robots experience may have reenergised Williams' interest in doing more animation, "but you know, you have to pick and choose. You don't want to do so much of it that kids go, [Kid Character] 'Is this you? Really, I'd like to see a movie without you.'?" Not there's any chance of that, with all the recent dark roles he has taken on. "Yeah. I got dark, psycho roles. I get nice letters from prison. It's like, 'Hey, pretty boy', " he adds, assuming the voice of a prisoner.

Williams has been on top of his game for over two decades so it was nosurprise that he received the Golden Globe this year for LifetimeAchievement, but cheerfully denies it had nothing to do with sucking up tothe much maligned Hollywood Foreign Press. "No sucking up. It's just likeI'd known them for twenty seven years and they were like, 'Why did you bringup the Pia Zadora thing?' 'Look, it happened. I know you, you're like my extreme extended European family. We come, we have a nice meal and we talk. Hello.' I've known them for so many years. It's kind of interesting because the Golden Globes are so much looser than the Academy Awards for better or worse. It has an open bar and you'll just see people half way through the awards going, 'This isfucking great.' And the FCC guy is going crazy."

But the Golden Globe and Oscar winner has a lot to be pleased about as hecontinues to balance between the mainstream and the off beat, as the actorprepares to shoot 'The Night Listening, ' which he describes as a "smallmovie in New York, where I actually play a writer who finds out that there'sa kid who's a fan of his and the boy tries to meet him, and it becomes veryconvoluted. It's nice to balance that with the animation, so it keep thekids off guard." Talking about animation, he has also finished Australian directorGeorge Miller's Happy Feet. "I play about six things in that, such as acouple of different penguins, a sea lion and a little Argentine penguin."

There also remains a possibility of Mrs Doubtfire 2. "They're trying towrite it. A friend of ours is writing it, and I think that if she can do itright, it'll be okay. If they don't do it right, it's not worth doing it.You've got to find a way of doing the character. How do you take it on after so long? You've got to be able to do her, do the character, why is she dressing up again, and how did she get away with it? The first one was so much fun because the conceit was pretty good and the makeup was great. The really good news now is that that makeup has come along. The make-ups have just gotten better and better and better."