Ray Stories of My Life 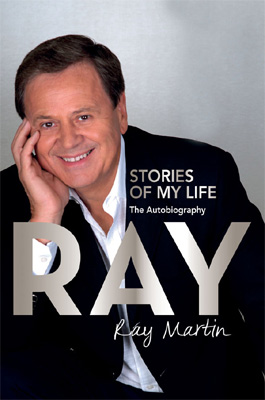 Ray Stories Of My Life

Before I even got to high school, I would live in thirteen different places, in three Australian stares, mostly in the bush.

Ray Marin is well known to most Australians as a television journalist, but few people know the real story of his formative years. Born in 1944, his early life was one of constant upheaval as his father found work around the country. Although Ray's overwhelming memories of his childhood are of 'fun, adventure and warmth', his father's drinking bouts, which culminated in violence towards his family, cast dark shadows. In desperation one day, Ray's mother, fearing for their safety, fled home one day with the children. Ray would never see his father again. He was only eleven.

Eventually settling in Launceston, Ray attended a selective school before going to university. He met his future wife, Dianne, when he was nineteen and they've been together ever since. But it was a chance job interview as an ABC cadet that started his other great love in life- journalism.

Ray's days at ABC radio were followed by almost ten years in New York as the ABC's North America corresponded. His arrival in the States in the late sixties coincided with the moon landings, the assassinations of Martin Luther King and Bobby Kennedy, and the Manson murders- a fascinating time for a reporter. As part of the job he also travelled with and reported on every US President from Lyndon Johnson to George W. Bush, and when conducting stories for Four Corners he uncovered alleged CIA dealings in the affairs of the Whitlam Government and met and interviewed Ronnie Biggs, the infamous criminal who Ray describes as 'silver-haired Lothario'.

Ray and Dianne decided to move back to Sydney after he was offered the job of a lifetime- a reporter on 60 Minutes. As Gerald Stone described it, 60 Minutes would be 'some crack ABC journos covering the world with a pretty much unlimited budget'. Stone wasn't wrong. Ray travelled the world for six years covering civil wars in El Salvador, Iran, Afghanistan and Beirut. He interviewed criminals, death-row inmates, movie stars and sparked two royal commissions, one with his reports on Chelmsford Private Hosptial and another into NSW Police Corruption after an interview with Sallie-Anne Huckstepp.

After the birth of his first child, Jenna, Ray left 60 Minutes to spend more time at home and to host the phenomenally successful Midday Show. It was 90 minutes of live television- one minute interviewing actors, the next the Prime Minister. It was a time of unforgettable moments, such as the Ron Casey and Normie Rowe spat, Michael Crawford forgetting his lyrics and crawling under a piano, Pamela Stephenson trying to take Ray's clothes off, and pranks played by the erstwhile Geoff Harvey.

Midday was home for Ray for almost ten years before he decided a change was in order. He wanted to get back into daily news stories and prime-time television, so accepted the job of hosting A Current Affair. He hosted ACA around the world from Washington, London, Rabaul, Jakarta, Port Moresby and LA and says, 'That's why we won the ratings; because we stayed staunchly in the current-affairs tradition. The biggest news story of the day, either here or overseas was covered on A Current Affair. You could count on it. Not anymore.'

Although Ray covered some of his favourite stories at ACA- Walter Mikac, Don Bradman, the Sandline Affair and Princess Diana's funeral to name a few- he was constantly railing against the turn it was taking towards 'consumer heaven'. After five years he decided to leave and turned to other projects, hosting a program called Our Century and fronting an evening variety show called The Ray Martin Show.

In 2003 he retuned to ACA in the hope of returning the program to a more relevant format with heavy-hitting stories. For a while it worked and the ratings were clawed back from Today Tonight, but slowly things started to unravel as key people were either sacked or resigned in disgust at management decisions. Eventually Ray left ACA after three years to go back to doing stories for 60 Minutes and Sunday. He briefly co-hosted Sunday with Ellen Fanning until another management decision to move the program from the 9am slot to 7:30am was the final straw and Ray left in 2008.

Summing up his career, which led him to win five Gold Logies among other accolades, Ray comments, 'From where I sit now, I have to say my three decades at Channel 9 were utterly fantastic, as were my earlier ABC years. I've been a lucky bloke.'

When asked about the most remarkable people he's ever met Ray mentions four people who form a chapter in this book. They are Fred Hollows, Terri Irwin, Bronte Cullis and Lindy Chamberlain. It was Fred Hollows who suggested that Ray accept a seat on the Council fro Aboriginal Reconciliation. Ray has also been chairman of the Fred Hollows Foundation, a patron of the Aboriginal Employment Strategy and is now the chairman of the Australian Indigenous Education Foundation.

Funny, warm and compelling, Ray: Stories Of My Life reveals the man behind the television screen and his extraordinary life.