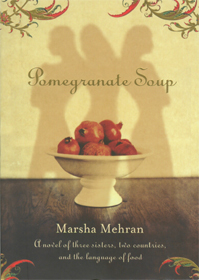 An enchanting tale of family, friends and renewal with a taste of something truly magical.....

It has been seven years since Marjan Aminpour fled Iran with her younger sisters Bahar and Layla at the beginning of the Islamic Revolution. In a sleepy Irish town beneath the holy mountain Croagh Patrick she hopes they might finally find a home. The sisters open the Babylon Cafe right at the heart of Ballinacroagh's Main Mall, sending the spicy, sensuous wafts of traditional Persian cooking to work their magic on the townsfolk. Soon business is booming and Marjan is thrilled with the demand for her cooking and with the transformation of her sisters - young Layla finds first love, and even tense, hanted Bahar seems less nervous. But then the lives they left behind in Iran begin to bleed into the present and everything the sisters have worked for is under threat....

Pomegranate Soup is your first novel. What inspired you to write this book?

I was living in Ireland in 1999 with my husband, who is Irish. "Multiculturalism" wasn't even in the vernacular; I was one of only a handful of 'foreigners' living in County Mayo. When I walked down the village main street, people literally came out of shop doors to stare at the "brown girl" passing by! At the local pub, I was often asked if I was Japanese or Chinese (ethnic groups which I do not remotely resemble). During this time I met a Middle-Eastern family that ran a deli outside of Castlebar. They sold cans of chickpeas, tahini, and Mediterranean condiments, which are common in supermarkets today, but were a rarity back then. This Lebanese family reminded me of my own parents, who had escaped the Islamic Revolution in Iran and moved to Argentina, where they opened a Middle Eastern eatery. They carried that same haunted, lonely looks on their faces that my mother and father had, as they struggled to build a life in a country so vastly different from their homeland. The image of this family stayed in my mind, even as I moved back to New York and began writing my first novel, a story about Iranian women. Nearly two years later, still toiling with the manuscript, it dawned on me that something was missing from my story -- a sense of joy. A happiness and vitality that is particular to Iranians, to Persian culture itself. I wanted to express the beauty of my birthplace; a vision I knew was incongruous with the dark, violent images Westerners see when they think of Iran. Above all, I wanted readers to smell and taste one of Iran's greatest contributions to the world: its delicate, perfumed cuisine. Somehow, all these memories and emotions came together as I began to write Pomegranate Soup.


Although Pomegranate Soup is not autobiographical, how much of your protagonists do you see in yourself?

I am a mixture of all three sisters, actually. There is a little of maternal Marjan, a bit of neurotic Bahar, and even a dash of the free spirit that guides Layla, in me.


Pomegranate Soup offers not only a fascinating picture of Revolutionary Iran, but also a buffet of traditional Persian dishes. What inspired you to make food such a prominent aspect of the story, and is there a specific Persian dish you love the most?

I'm mad about cooking. Chopping and frying is so relaxing to me; a perfect expression of love. When you give of yourself through a dish, you aren't just feeding somebody's physical hunger, but a deeper longing for home, for a safe place to rest. I have to say that my favorite Persian dish is gheimeh. It's a delicious stew made from tomatoes, yellow-split peas, lamb, and French-fried potatoes.


Persian cuisine is still fairly unknown to the greater American population. Why do you think this is?

Maybe it's a public relations thing - not enough advertising. There are approximately 1 million Iranian-Americans living in North America, most who moved here after the revolution. So, it probably is just a matter of time, really. I'm definitely ready to spread the word!


It is fascinating how many of our Western ingredients and dishes have a direct connection to Iran. The ancient Silk Road connecting Europe and Asia ran right through the Iran, isn't that so? How do you think this influenced world cuisine?

With dishes dating back three millennia, Iranian cuisine has influenced the eating habits of countless cultures: Ancient Greeks, Romans, Chinese, Indian, Arabic, medieval Europeans, you name it. Lemons, oranges, pistachios, barberries, saffron and pomegranates, were instant sensations in ancient Greece and Rome, flavoring their bland dishes and changing the course of language forever. Many of our words for foods find their etymological roots in Iran. Lemon, for example comes from limoo, the word orange from narang, and so on. Most importantly, Persian cuisine, with its myriad ingredients and balance of sweet and sour flavors, has endured because it is undeniably tasty. A spoonful of saffron rice, buttered and sprinkled with dill and lima beans, is pure heaven.


Persian cuisine, surprisingly enough, has also influenced our own views on healthy eating. The Surgeon General's daily nutritional recommendation -- the food pyramid we've been taught to follow for so long --has its genesis in the Persian Zoroastrian system of balancing. Where does this balancing theory come from and how is it implemented in Iranian homes today?

Zoroastrianism was founded by the Persian prophet Zoroaster around 600BC and is now believed to be one of the first, if not the first monotheistic religion. It's dualistic in nature, and its basic concept concerns opposing forces: good and evil struggling for supremacy. This theory of opposites extends to every aspect of life, including diet. Foods, like people, are believed to have natures, hot or cold, garm or sard. Melancholia or lack of energy can be treated with Garm foods. Hot-tempers, fevers, and nervous tension will be alleviated by Sard foods. Good health is obtained when there is a balance. Most modern-day Iranians, my mother included, still believe in this system of gastronomic balancing. During my school years, if I had an important exam coming up or needed to have all my wits about me for an assignment, my mother would insist I eat ajil: a mixture made from dried fruit such as raisins and figs and walnuts, almonds and pistachios. She believed that this garm food would raise my energy levels and help with concentration. (I would always ace a test when I followed her advice!) To calm me down on hot days, or when I was particularly temperamental, cucumber and yogurt dip combined with white basmati rice was a good sard remedy. Likewise, in the book, Marjan keeps a close watch over her moodier sister Bahar, feeding her dishes according to her state of mind.


In the US we take our meals wherever we can: the dinner table, the couch, in the car, squeezing them into our busy schedules, almost like an afterthought. It's completely the opposite in Iranian homes, with their tradition of the sofreh. How does the sofreh affect the way Iranians eat?

Not until my late teens did I ever use a dining table for something other than collecting books, errant newspapers and household bills. All my childhood meals were celebrated on a piece of embroidered cloth called the sofreh. Sitting cross-legged along its borders, families are able to 'touch base' in the most fundamental of ways. A picnic three times a day! A typical meal could last up to two hours, and if the weather was particularly hot, the entire contingent would move outdoors. Rooftops or any patch of grass would do. In the book Marjan has a wonderful memory of spending a hot summer's night eating and telling stories on her childhood home's sunken rooftop. I, too, have distinct memories of dining around a sofreh on our rooftop in Buenos Aires, while my mother told me fantastical tales of Scheherazade and the 1001 Nights.


There are some dishes and ingredients that are quintessentially Persian. Fresh herbs, for instance, aren't just used as seasonings and/or garnishes. What is it about herbs that Persians love so much?

Nothing, absolutely nothing beats a warm piece of lavash bread folded over creamy feta cheese and a fat sprig of sweet basil or mint. Herbs reign supreme in Persian cuisine. Platters piled with bunches of tarragon, marjoram, mint and basil accompany every meal, as does homemade cheese and just-baked bread. Persian supermarkets, unlike their Western counterparts, devote long refrigerated aisles to fresh herbs, which are sold by weight and not sprig. Stews, salads, rice, egg dishes, ground meat mixtures - all contain at least a cup, if not more, of chopped herbs. Marjan Aminpour has a special affinity for herbs, a green thumb for planting them wherever she goes. They give her strength and hope. I also grow my own herbs. I use small terracotta pots, lining them along my sunny kitchen windowsill. It was a practice I picked during my time in Ireland, where the inclement weather made it hard to grow delicate plants outdoors. I love my little collection of sweet basil, lemon mint, dill, and cilantro!


I love the image of the bubbling samovar in the novel, which is so central to the Aminpour sisters' café. Coffee is the caffeine of choice in the US, but in Iran there is an entire ritual surrounding tea. Can you tell us a bit more about this?

There was a period in my childhood when samovars seemed to be taking over our household. My mother had an obsession for them and scoured garage sales and Persian grocery stores for antique, brass, miniature, and electric versions of the water boiler used to make tea. No matter what time of day, visitors to our home were ensured a hot cup of tea thanks to these miraculous machines. Persian tea is easily obtained at any Middle Eastern grocery store nowadays. However, if you're looking for an approximation in the general supermarket, an even mixture of Earl Grey and Darjeeling will do. Persian tea exudes a rich, orangey perfume and a dark amber color. The thing to remember is that Persian tea is always meant to be taken with some sort of sweet accompaniment, such as sweetened nuts, fruit, nougat candy, dried mulberries, or raisins. But beware: Persians never sweeten their tea beforehand. Rather, cubes of crystallized sugar are clenched between the teeth, before a sip is taken, allowing for the synthesis to occur right on the tongue.