Pink Suit for a Blue Day 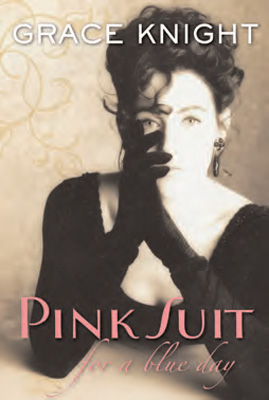 Pink Suit for a Blue Day

Grace Knight publicly reveals the shocking secret she has carried all her life for the first time in a tell-all autobiography, Pink Suit for a Blue Day. Detailing a long journey filled with bumps and hurdles, she provides an intimate look into her career as one of Australia's most enduring music stars and unveils with brutal honesty the harrowing tales of sexual abuse she endured throughout childhood. Not only is this a fascinating look into the secret life of a music idol, Pink Suit for a Blue Day is a inspiration to anyone who has been the victim of physical or emotional abuse proving that with honesty and the help of loved ones, the move towards healing and forgiveness is possible.

Singer Grace Knight has been a fixture of the Australian music scene for decades, first as a member of the indie pop group, Eurogliders, in the 1980's and as a solo jazz singer since the group disbanded in 1989. But this glamorous star has carried with her a tragic and burdensome secret, one of betrayal and abuse by a member of her own family that she now reveals publicly for the first time. In this frank and heart-wrenching memoir, Grace tells of the childhood sexual abuse that she endured from her father and the life-long impact that this trauma had on her as she rose to fame and struggled with holding down relationships.

"I have written this story for the women and men that have nurtured a legacy around some form of abuse, in an attempt to expose the nature of our selves, by exposing myself," says Grace.
"I feel obliged to write this story, because to a degree I feel like I have come out the other end, I've slain the dragon."

Singer Grace Knight came to international attention when the Eurogliders released their biggest hit, Heaven (Must Be There) in 1984 off the album This Island. This song just missed the top spot in Australia, reaching #2 on the charts, also reaching #21 in the United States and appearing on the Billboard Mainstream Rock charts and the Hot 100. The group found continued fame, particularly in Australia, where their next album, Absolutely, became a top-ten hit and provided three top-ten singles.

When the group went their separate ways in 1989, Grace began the next phase of her career as a successful solo jazz singer, releasing her fifth solo album, Willow, in 2008. She also took part in the brief Eurogliders reunion that saw the group release two more records between 2005 and 2007.

Despite the scrutiny of one's personal life that inevitably comes with fame, Grace has successfully concealed her biggest secret all her life, but now opens up publicly for the first time in Pink Suit for a Blue Day, sharing her journey from betrayal to healing and ultimately forgiveness.

Question: Why did you decide to write Pink Suit for a Blue Day?

Grace Knight: I wrote it because I felt like I had come out the other side myself, and that I was able to slay the dragon, the legacy dragon. I felt that there were so many woman and men that were living their life through a legacy that had been bestowed upon them since childhood that I hoped that I might be able, in some way, inspire them.


Question: How do you think Pink Suit for a Blue Day will help other victims of physical or emotional abuse?

Grace Knight: First and foremost Pink Suit for a Blue Day is a memoir or an autobiography and all I have done is really tell my story. I have been very mindful not to be prescriptive in the story because there are so many different facets and people are so different to each other. I have written the book because I think the thing that shocked me the most was how one can define themselves through a legacy and I hope that by exposing myself and exposing that, that people might be able to look at their own demons.


Question: How has writing Pink Suit for a Blue Day helped with your recovery?

Grace Knight: I had already recovered before I wrote Pink Suit for a Blue Day, I'm not sure I would have been able to write it, had I not. After feeling the benefits of not travelling throughout life with this legacy tired to my ankle, I felt obliged to write it.


Question: Can you talk about what you titled the book Pink Suit for a Blue Day?

Grace Knight: Pink Suit Blue Day was a title of a song on Eurogliders very first album. As the lead singer of Eurogliders I used to very much, perform from behind a mask and this mask that I gave Grace Knight, the lead singer, had all the traits of a successful, vibrant, confident woman- all the things that Grace Knight, the person didn't have. I think Pink Suit for a Blue Day describes very well the fact that one can act ones life.