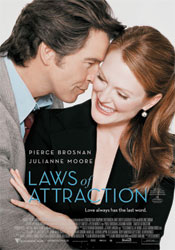 Pierce Brosnan may indeed be 007 but beyond James Bond, he has carved more than a respectable big-screen career. In his latest film, Brosnan and Moore star as brilliant New York divorce lawyers who find them inexplicably in love. Brosnan talks Bond, family and love with Paul Fischer.

Pierce Brosnan looked relaxed enough at a Los Angeles hotel room talking up his latest film, Laws of Attraction. Brosnan was more than happy to take on an unBond-like role in this charming battle-of-the-sexes comedy, in which he and Julianne Moore play a pair of hugely successful, yet sparring divorce attorneys who eventually find themselves in love and in Ireland. Brosnan's Daniel is self-effacing, charming and in love with the idea of marriage and commitment. Are actor and character alike, one asks the 50-year old star? "Well, not really. I mean, it's the advantage of having your own company where you can tailor make the part to fit you," the laid-back Irishman concedes. "On paper he started out ! far more cynical than what you saw in the film. Director Peter Howitt brought a lot of heart to the piece which it was in need of because it was very cynical and they were just at each other the whole time and it didn't make sense. But like I say, Peter brought his writing, acting and directing skills to it. Once we started hammering it out with him, we found much more of an affability in the fellow." The one thing Brosnan and his character DO have in common, is their pro-marriage attitude. "I strongly believe in marriage and that people should stay together. I don't think that it's easy being a human being, man but it's great for so many years, you're always going to encounter obstacles and I think you have to hang tough with your partner."

Brosnan is enjoying his second marriage to TV journalist and writer Keely Shaye Smith, whom he married four years ago, 9 years after the death of his first wife Cassandra. He says the success of a long and happy marriage is simple as far as he's concerned. "I think ultimately it's solving problems because you're always going to have them in a marriage, whether it is money, in the bedroom, the in-laws, too much work or not seeing enough of each other. There are always problems, and how do you solve those problems and keep an open line of communication going and respect?" Asked how he manages to balance all those facets, Brosnan adds. "You can't really sum it up in a sentence. It's stressful at times because I want to have my cake and eat it. I want to have family life. I have two little boys now who I absolutely adore, and I have older children! who have set sail in life. Also my wife and I want to travel, so right now, without her, I think that I would be dead in the water because there's so much happening." The actor further admits "she has sacrificed a lot in the last number of years here certainly with my being Bond and it's been pretty hectic. Also forming a company like Irish Dream Time means that you're always looking ahead a year or two. You just have to keep working." Brosnan also believes that being in the same industry with your partner enhances a relationship's longevity. "It certainly helps; I think that the simpatico between us is an enormous benefit to our lives. Keely was an actress and still has those innate skills, but she's also an artist, a gardener, a writer, and an environmental journalist. We have the same passions for life and of course for our children."

One of the enduringly lingering characters in Laws of Attraction is Ireland. The film may have been shot in Brosnan's native land for mainly economic reasons, but the actor clearly loves returning, and sees the country as an integral thematic element of huias latest film. "Well, ultimately, at the end of the day, I though that Ireland wove her magic around us and it was a summer well spent for us all in making this film. Everybody had the most fabulous time there once you got over the anxiety of trying to pull off making a film in Ireland with a story set in New York. There are parts Dublin town, restaurants and the brownstone, the old world aspect that lends itself to the story."

While Brosnan has been an established actor for some two decades, it was agent 007 that would send him to that next level, yet it has always been clear that the idea has tried to distance himself from the character when seeking out new scripts. "I suppose there's that element in there, but I don't pick up each script thinking; 'Now I have to get away from "Bond".' It's not at the top of the list. It's a message that was sent to a certain part of my brain a long time ago that I have to be aware of the roles that I play, but not really." He says that his attracted to Laws, was that "I wanted to do a romantic comedy and this was as good as it gets with the scripts that we looked at, so without kind of waiting for the holy grail, we set sail with 'Laws of Attraction'. I loved the premise and I loved that it made me smile that we were two divorce attorneys who suddenly fall in love or he falls in love with her at least, and what happens next. I don't really kind of worry about the 'Bond' thing." But the 'Bond' thing still comes up in interviews, time and time again. You would think the actor is tired of discussing the franchise. "It's going to take a while, unless in the next five or ten years, I put down some good work and do something that surprises people. I mean, [Sean] Connery is still Bond and he'll always be a Bond, so I think that once you play the character, it's always part of your life."

Brosnan has always remained cagy about the future of his participation in the Bond films, and this interview was no exception. "You'd have to ask the producers. There seems to be a certain amount of paralysis that has set in here, paralysis of producers, producing paralysis," he says smilingly. "I haven't signed for another 'Bond' as my contract is up after four movies. But I would love to do another one and they know where to find! me. If it's meant to be, then great, and if not, that's fine." As to bowing out with a seventh film, Brosnan says absolutely not. "I'm fifty years of age now and I think that there comes a point where you just say, 'I've been there, and I've done it.' The ones that I've done have been very successful and I think that if you look at them, there's been a progression within my work there, as well an assuredness and a confidence. So, if there's to be a fifth, then great."

But with what time? Apart from his family obligations, when we spoke, Brosnan was getting ready to go to Mexico to shoot The Matador, co-starring Greg Kinnear and Hope Davis. Again, Brosnan is producing. "There are bulls involved, but it's really a metaphor. I'm a hitman who's having a nervous breakdown."

Brosnan has also wrapped on After the Sunset, where he plays a character quite different again from his Laws of Attraction character. "Well, they're kind of worlds apart, 'After the Sunset' is more in the genre of the mystique, the mysterious man, although, you don't know much about this fellow, actually, in 'Laws of Attraction'. I guess you could say one is a thief, and one is a divorce attorney," he adds laughingly.

It has been quite the road well-travelled for this Irish lad, and as we sum up, Brosnan ponders over his greatest professional and personal accomplishments, as the actor prepares to turn 51. "I think my greatest professional accomplishment is just longevity in the game and having kept up and there are certainly a number of films that I'm fond of. I think that my personal achievement is really keeping a family together, keeping our children on track as much as possible, finding love a second time around and having a good life."