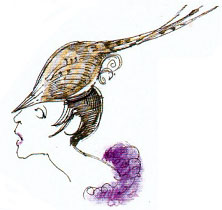 Eccentric style icon Isabella Blow is famous for wearing outrageous yet glamorous headwear - most of which was custom made by London-based milliner Philip Treacy.

An exhibition of these extraordinary hats, When Philip met Isabella - Philip Treacy's hats for Isabella Blow, celebrates twenty years of collaboration and will be displayed in its only Sydney showing at the Powerhouse Museum from 29 May to 13 July 2003.

Since their first meeting in 1989, Blow has been Treacy's friend, muse and constant source of inspiration. Many of his most surreal and sculptural hats have been made for her. "Issy never says: 'You've gone too far,'" says Treacy. "She always says: 'You haven't gone far enough.'"

When Philip met Isabella features Blow's personal collection of Treacy's beautifully crafted hats. Exhibits include the Ship, an astonishingly realistic replica of an 18th century French ship with full rigging made from miniature buttons, and the Castle, inspired by Blow's ancestral home at Doddington, Cheshire and Ludwig of Bavaria's magnificent palace. Gilbert and George is a spectacular creation of pink and green lacquered ostrich feathers. Horns is a black satin replica of the horns of Blow's own flock of ancient Soays sheep.

Born in Ireland, Philip Treacy studied fashion design in Dublin before winning a place at the Royal College of Art. As well as founding his own successful hat business, he has made haute couture hats for such fashion houses as Chanel, Valentino, Gianni Versace and Alexander McQueen.

Isabella Blow has recently been appointed Fashion Director at Tatler Magazine, the UK's high society bible. She is one of the world's most influential creative directors who has worked for magazines including American Vogue, Visionaire, The Face and Vogue Italia. She played an important part in nurturing the careers of many designers, including Alexander McQueen, as well as Philip Treacy.

When Philip met Isabella is full of glitz and glamour as well as colour and imagination. Treacy's hats embrace fantasy with incredible energy and reveal why he is known as the master of modern hat making.

Visitors inspired by the exhibition can learn more about the art of millinery at a one-day workshop led by Melbourne-based milliner and textile artist Waltraud Reiner. The workshops will be held at the Powerhouse Museum on Saturday 14 and Sunday 15 June, 10am - 5pm. Cost is $55 per person and bookings are essential on (02) 9217 0222.