You spent some time with Hollywood's CIA advisor Milt Bearden: what sort of specific insights did he give you into Gust's character?

Philip Seymour Hoffman: Milt was there, Milt was the last station chief in Afghanistan. He was there at the end of the '80s when the Afghan War ended. He knew Gus intimately. It really was the most helpful thing. It was less about finding out about the CIA and more about his relationship with Gus, what Gus did, who Gus was. It was very helpful.


Was it fun playing a character that was such a firebrand?

Philip Seymour Hoffman: It was. There's a lot he's not happy about and what he's not happy about you can really get behind, you can really see his anti-establishment qualities, something that's earned. I read about his life, and the things he did before this story are outrageous. When he says that people were trying to kill him, that's something that would have come out of his mouth. When he was in Greece he did live a life where he was at risk of being killed, and his companion had been killed during earlier. It was a case of one of those great characters where you could really get behind somebody who's life was lived in such extremes.

Philip Seymour Hoffman: Unfortunately he passed away a year ago, December 4th. Just a few months before we started work. I really miss meeting up with him.


Did you meet the real Charlie Wilson?

Philip Seymour Hoffman: He was around. He was very close to Gust, obviously. The character in this film is very like him. Very tall, handsome and he could charm you for days. He could win you over in a heartbeat, very bright and very Texan.


Was Joanne Herring there also?

Philip Seymour Hoffman: I didn't meet Joanne but she was there.


Do you feel a responsibility playing these important characters? Does it make it more difficult to feel that your being true to the original character?

Philip Seymour Hoffman: It's not a documentary and that's a really important thing. You're interpreting the character's stories and there are certain truths and facts based on history that can help you inform that story. Those are the things you try to stay true to. But they're actual interactions and something you have to interpret. When I did Capote I learned that you have to look at characters and the way they lived as if they're fiction. Ultimately they are, and it's the way you're interpreting them. Unless it's a documentary there's no way that you can actually have a facsimile of somebody's life and show the real person. So you need to look at it almost as if it's a character that hasn't lived. The flipside is to look at every role as if they have lived. Meaning there's no role that hopefully I'll play where there's not somebody who will watch it and not think that that's them. You're always representing somebody out there in the world and I try to stay true to that.


Does this have a bearing on your career , would you rather play someone that exists?


Are you keen to explore more political movies in particular?

Philip Seymour Hoffman: I wouldn't answer yes or no. You get involved in films that you think are artful, if that makes sense. That's my thing. Films that have an opportunity to create something. When you see, for example, any great painting, there's something about it you think "what is that?", that's what you're looking for. Also everything is political, you can't get away from that because the people you're telling a story about live in a society and you're telling something about that society. It's always political. I think it's always more effective if you've got to somebody through that line, that's the way that's going to impact them the most. Almost all of us live in the real world, we don't work at the White House or at the U.N. We're all impacted by our day to day lives not by decisions that are made in those buildings, by those people.


Should Charlie Wilson get credit for helping to end the Cold War?

Philip Seymour Hoffman: Yeah, and I think that it's fascinating that his story is one of the elements that went into the beginning of the end of the Cold War, and went into the Taliban taking over. It's not the only thing but I often wonder if people know that part of history. It's only interesting to me if it's told in a way that I feel it's actually impacted somebody personally, or else there's a distance that you can create as a viewer. You can just watch a film and coldly make objective judgements instead of seeing the messiness of things. I love exploring things that are not nearly as black and white as you thought.


Do you think that there are any modern politicians who'd take the risk that Charlie did in Afghanistan?

Philip Seymour Hoffman: It's important to say that it was a different time. I'm not sure I know any modern politicians the way I know Charlie now. I know of a lot of politicians like everyone else does, through reading the paper, magazine articles and watching documentaries on the TV. I get informed the way everyone else gets informed. I certainly don't know them as personally as I know Charlie . The few times I have been able to meet a high profile politicians it's amazing that I'm always completely surprised by the way they are; I always have a different preconception.


Mike Nichols was saying that he didn't feel the movie was making a political statement. Do you feel that in the end it makes some kind of point?

vLike I said, ultimately, everything is political. And the end of the movie there is the statement more or less saying that this was all done, but we didn't finish the end game in Afghanistan. But that's a statement made by a man in the movie and how he feels about the continuation of that story, that he ultimately wasn't a part of. But I think Mike's right the film doesn't say what this caused this. It's showing you that at that time these kinds of people, amazingly enough, were the ones that helped the Mujahadeen succeed. I kind of think that there's another story to tell after that.


Do Americans talk about politics all that time?

Philip Seymour Hoffman: We talk about politics all the time. It's all we talk about. We're 24/7 news.


How about on a personal level? Did it trigger conversation between you as you were filming?


Have things changed for you since filmed Capote?

Philip Seymour Hoffman: A lot of the films coming out now are jobs that I got around the time of Capote; they didn't come so much afterwards. To tell you the truth I've been grateful for a long time. I got a chance to work with great people for a long time. If you see me complaining about my career slap me. The roles I've been given, the parts, the directors and the actors are amazing to me. It's amazing that I've had the chance to work with Mike Nichols and Sidney Lumet in the same year. There was no game plan or anything like that. I've made good decisions on material and people I wanted to work with.


Did winning an Oscar change things for you?

Philip Seymour Hoffman: I think people will entrust me with more risk because of that. More people know you because you win something like that. With this film, this is more just a continuation of something that really culminated in a successful run of films I got to work on. A very good thing.


What do you remember of the end of the Cold War?

Philip Seymour Hoffman: I was 11 or 12 years old. As a child I knew about it because of the Olympic boycott. But all these issues about the covert action, these only started coming to light after 9/11. That's when all the history started coming out. Not just that there was a war and then the Berlin Wall came down; people were very hungry to know all the things that lead up to the change that was happening in our world. That's stuff that I learned as an adult. As a child I remember a bit about the Cold War. And Nicaragua, I remember that situation with Reagan. 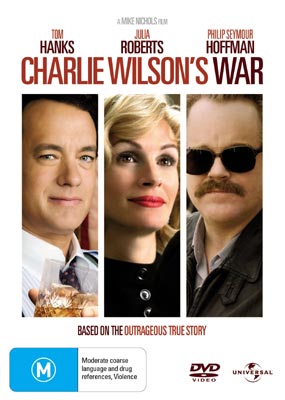 Charlie Wilsons War -the highly entertaining, light political comedy that has celebrated critical acclaim underpinned by an all-star cast and stylishly clever script -is available to own or rent on DVD from June 11, 2008.

Based on true events and the best selling novel by George Crile, Charlie Wilsons War is the powerful story of how a playboy Congressman (Hanks), a renegade CIA agent (Hoffman) and a beautiful Texan socialite (Roberts) join forces to lead the largest and most successful covert operation in history. Their efforts contributed to the fall of the communist Soviet Union and consequently, bought about the end of the Cold War - an outcome that reverberates throughout the world today.

Under the direction of Mike Nicholls (The Birdcage) and with the writing of Aaron Sorkin (The West Wing, A Few Good Men), Charlie Wilsons War is fast-paced, incredibly funny and thoroughly entertaining.

One of this years funniest smart movies that combines a great cast with a brilliant script, Charlie Wilsons War is a must see DVD this June.