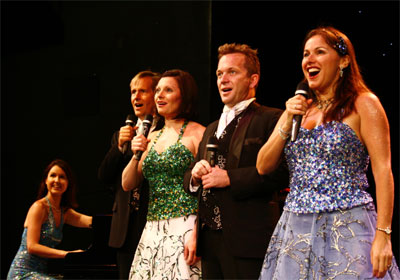 Imagine ... being taken to all of these shows in just one night of entertainment featuring sensational Australian songsters Pot-Pourri, showcasing the highlights and humour of opera and music theatre - Madam Butterfly, Rigoletto, Carmen, Turandot, Lakme, The Pearl Fishers, Phantom of the Opera, Les Miserables, Chicago, Cats, Westside Story plus favourite songs of Andrea Bocelli, Josh Groban, The Three Tenors and more. Plus Australia's brightest emerging chamber group, The Yarra Trio.

This is a show for the whole family supporting The Alannah and Madeline Foundation and The Australian Childhood Foundation.Pot-Pourri has a fabulous new line-up with husband and wife team Rebecca and Jon Bode taking over from soprano Dominique Oyston (10 years in the group) and tenor Craig MacDonald (17 years in the group). Musical director and pianist is the very talented Rebecca Chambers.

After an exhaustive audition process, Pot-Pourri founders Tania de Jong AM and Jonathan Morton almost despaired of finding the perfect fit for the group's unique sound, let alone the friendship and team spirit that has characterized the Melbourne group for more than 21 years. When Rebecca and Jon Bode sang with them, however, they were instantly certain that they had found the right people to round out the team.

Rebecca and Jon joined Pot-Pourri shortly before a major international tour, with a sell-out performance season in The Actors Studio in Malaysia. This opportunity came as barely a challenge to the couple, who between them have worked with Melbourne Opera Company, The Victorian State Opera, Melbourne Theatre Company, Opera Australia and the London City Opera - and have two young children!

Pot-Pourri will be performing with The Yarra Trio, Melbourne's hottest up-and-coming classical music trio. Featuring cellist Chris Howlett, violinist Jess Ipkendanz and pianist Stefan Cassomenos, the trio has been delighting audiences around Victoria since 2007. Performing a wide range of music both classical and contemporary, they have amassed a resume many musicians only dream of, with awards from the University of Melbourne, the Australia Council and The Musical Society of Victoria.

The pairing of The Yarra Trio and Pot-Pourri is mirrored in the highly successful pairing of the founders of the two groups, Tania de Jong and Stefan Cassomenos, who have recently created their very own performance, entitled The Pianist and The Diva. Always eliciting an impressive response from their audiences, The Pianist and The Diva felt that it was high time for a meeting of their respective groups. It wasn't long before the perfect venue presented itself in the form of Rochford Winery, with both groups delighted to assist children's charities through their performance.

For more information, please visit www.rochfordwines.com or www.Pot-Pourri.com.auRecently named BT Publishing's Australian Event Entertainer of the Year for 2007, fabulous Melbourne group Pot-Pourri have enchanted audiences around the world on over 40 international tours with their inspiring and unique sound, much-loved repertoire of opera, music theatre and song and their inimitable warmth and wit. Just returned from international success in Asia, New Zealand and Europe, these talented artists hit those high C's in Opera, belt out Broadway, seduce with song, dance up a storm, create magic and stir your soul with haunting didgeridoo and ballads!

"The voices are inspired, the music is sublime and the production all you could wish for.... a standing ovation!" Herald Sun
"unmissable entertainment... they are superbly talented." The Press, Christchurch
Pot-Pourri has recently released its sixth album Nella Fantasia.

Do not miss a very special night to remember under the stars in Victoria's Yarra Valley!