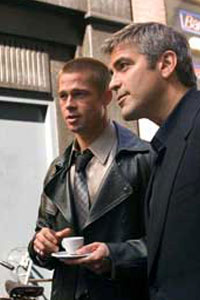 In the midst of Palm Springs, California, a frenzied media is summonsed to hear the wise words of George Clooney and company as they assemble, with dry humour in toe, in order to hype up Steven Soderbergh's all-new Oceans 12. Well, perhaps not wise, but in the midst of it all, eloquently attired in black, looking perpetually distinguished, is George Clooney. Never one to take himself seriously, sitting in the centre of a podium surrounded by some of his co-stars and the hungry wolf-like journalists attempting seriousness, Clooney is, to quote a famous ex-TV character, the master of his domain. Quick witted and charming, Clooney may be a Hollywood big shot, but it is evident when watching him in this journalistic forum, that he loves to play, especially when it comes to ribbing co-star Brad Pitt. According to the jocular Clooney, it was Pitt who resisted coming back for another game ofOceans.

"Pretty boy Pitt. You know, he's been a little upset because of the Jude Law sexiest man thing. You should ask him- - He knows we're going to tee off on him when he comes in here because he has been talking about it quite a bit. He was down and it hurt him," says Clooney, laughingly. Set three years after "Ocean's 11," this sequel shows us Danny Ocean gathering up his complete gang of con artists and thieves from the first film in New York City before they all jet off to Amsterdam, Rome, and Paristo pull off three separate heists. All the while, the boys must deal with increasing pressure from an angry and vengeful Terry Benedict, a dedicated but ultra glamorous Europol agent [Catherine Zeta-Jones] and a mysterious French rival simply called Dinner Jacket [Vincent Cassel].

Getting this gang to reunite for the sequel was no easy task, but in a rare moment of seriousness, pulling a sequel that doesn't resemble a mere commercial enterprise, was something else again. "The truth was, we didn't start the first one with the idea of doing a second, so the second one came about organically. We were literally in Rome and Steven, who had never been to Italy before, and I were sitting in a restaurant and he looked up and said, I've got an idea for a sequel. So the truth of the matter is we wouldn't have shown up if Steven hadn't had an idea and a different way of telling the story," Clooney explains.

"The problem with sequels, as we all agree, is that it's usually just a sort of rehash of the film before it, and trying to take the things that work. Steven had a way of saying: let's mix up what just happened in the first one and really throw these guys off. We thought that's a really interesting idea and a reason to do a sequel."

Clooney adds that while this is another complex caper film, a good film is far more than a convoluted series of plot twists, which was another reason to do this sequel. "I think in almost every good caper movie, the caper's the least important part, as in Eleven, caper where it was the camaraderie. You want to have a good story and you want to have a good fun caper but I think the mistake that filmmakers make is when they decide that the caper's the most important thing in the film. It can get complicated and too much, but that wasn't our main concern." As for another sequel, Clooney is non-committal. "We came up with our own theory, which was the musical, Oceans 5, 6, 7, 8," he begins, typically. "Look, we're not even thinking about it, honestly, we really aren't. The only reason we did it the last one, was because Steven said here's a great idea and [producer Jerry Weintraub said let's put it together."

Clooney of course, cannot stand being too serious about Oceans Twelve for too long, dryly admitting that no, there was absolutely no camaraderie on this film set. "This one was actually a job. Did anybody get along in this? I don't really remember. Quite honestly, Brad set the tone, and he's such a movie star, but it was fun, we had a great time. Always, fun people, except for Julia. We don't like her, or her twins."

While the first Oceans was set in Vegas, the sequel has the clan in Europe, during which time Clooney took advantage of staying in his Italian house for much of the shoot. Clooney loves working in Europe, not only because of the great food, but "I've been lucky enough to have a home in Italy, spend sometime there and I'm a huge fan of it all. I grew up in Kentucky so I didn't get to travel too much when I was young, so I've been sort of discovering alot."

The actor recalls inviting his cast mates to stay with him, and looking back, has some regrets. "I have a lot of regrets about them staying in my house, although I have to say that Matt is very clean and cleans up his room. But seriously, it was really fun and we had a great time." That great time including playing practical jokes on each other, on occasion,with Pitt and Clooney at the centre of the mayhem, as Clooney recalls. "You see, Brad had done some dastardly things to me. When we first got to Italy, Brad had a memo put out in Italian that said to all the Italian crew that Mr Clooney would appreciate it if you would only engage him as Danny Ocean or Mr Ocean, and don't look at him in the eyes. He handed it out so it really sounded like I was trying to stay in character, so for about a month that went around, everywhere I went, it was like, OK, Mr Ocean until I finally said, what the hell is everyone doing? When it got into the paper that Iwas like this diva who made all the crew call me Mr Ocean, I felt like I had to get him." And get him he did, Clooney recalls. "So I just put two bumperstickers on the back of his car, one that went for a few days that said 'I'm gay and I vote', political year, and then it was 'Small Penis on Board', which ran for a few days too. People were honking at him and waving and he thinks it's because he's Brad Pitt and he's waving back."

Clooney has come a long way from his years as a struggling actor, before ER turned him into a major star, but the impression one still as of the actor, is a man with a great sense of humour, humbled by experience. The Kentucky native remembers his roots, and remains close to his politician father, Nick Clooney, who recently lost a congressional electoral race. "My Dad and I are very close and he's had a tough time of it, at 70 years old to try a new career. It was an exciting time for him and I think it's very disappointing, but he's doing great. He is and always has been a great inspiration to me. My father's been an inspiration for ever and has always said, don't wake up at 65 years old and say what you should have done and that's the easiest way I've lived my life."