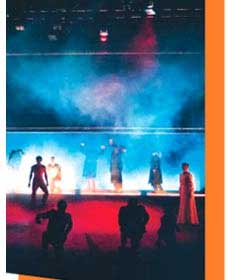 The NIDA Autumn Season includes three classic comedies: The Game of Love and Chance by Pierre Carlet de Chamblain de Marivaux, The Rivals by Richard Brinsley Sheridan, and Cant Pay? Wont Pay! by Dario Fo. All three plays are to be performed by the graduating students in the Parade Theatres from 11 to 17 April.

"Comedy is a most demanding theatrical form," says Director Aubrey Mellor. "It makes demands on an actors technical skills and requires considerable courage and dexterity. The plays in this Season have been chosen for our final year actors, considering a sense of period in language and behaviour, together with the physical and vocal commitment required of the acting."

THE GAME OF LOVE AND CHANCE

Pierre de Marivaux was considered France's greatest 18th century playwright. The Game of Love and Chance is a romp through social class-consciousness, arranged marriage and love in the 18th century. It centres on an arranged marriage in which the young man and woman who are to be betrothed, wish to survey their potential mate prior to agreeing to the union.

A fresh look at Sheridan's classic comedy of love and intrigue
The Rivals is Sheridans first play, and is thought to be based on his own life including his scandalous marriage to a popular singer, and the people he met in Bath, a fashionable resort and health retreat of the era.

Director Jennifer Hagan says, "Actors love playing vividly drawn, flawed characters and this play is crammed with them: self deceiving men and women in pursuit of happiness. The play allows actors to exercise their comedic skills and at the same time gives an audience a thoroughly enjoyable evening."

An hilarious, farcical, political comedy about working class women rebelling against the spiralling cost of living.

Can't Pay? Won't Pay! is based on Dario Fo's "Non Si Paga? Non Si Paga!" which he wrote during the politically charged atmosphere of Italy during the mid 1970s, to highlight the plight of ordinary Italian workers during the economic crises of the 1970s.