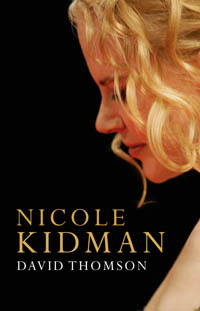 Nicole Kidman was first noticed on the international stage after her roles in 'Dead Calm' and 'Days of Thunder', and became a household name when she fell in love with Tom Cruise. Who could believe this tall, pale and pretty Australian girl could capture the heart of one of Hollywood's biggest heart throbs and end up as one of the most successful and admired celebrities of our age?

Could one see a magazine deciding that Julia Roberts or Jennifer Lopez or Angelina Jolie were 'intriguing'? There is something mysterious and not quite settled with Nicole Kidman. That's why David Thomson, one of the world's greatest writers on film, knew he wanted to write about her, because while there may (just) be more attractive women on the screen, and even more consistent actresses, there isn't any modern career that has so transformed itself. It's as if Nicole Kidman suddenly decided no, I'm not just Mrs Tom, I'm not just a nice red-headed Sheila, I'm an actress, a businesswoman, I'm something - and I'm going to show you all.

How else does one reconcile the Kidman of the early and middle 1990s, the woman who was so often pretty but not much else in Days of Thunder, Billy Bathgate, Far and Away, Malice, Batman Forever, The Portrait of a Lady and even Eyes Wide Shut, with the steady progression of Moulin Rouge, The Others and Birthday Girl, and then The Hours, Cold Mountain and others? Not all her recent films are good and she's not a triumph in all of them - but she is a dangerous actress, a risk-taker, someone pushing at her own talent.

She was named by 'People' magazine as one of the '25 Most Intriguing People' in the world. David Thomson is an admirer of Nicole Kidman and in this biography he peels away the layers which have made Nicole into a Hollywood star. His focus is on Nicole Kidman as the actress; a woman playing a part we as her audience want and need her to play. A woman unable to share with us her public self as she continues to play the role of 'Nicole Kidman'.

This is a biography of an Australian girl who has become world famous. It's also the record of an actress as she grew. The book is a vivid portrait, a searching treatment of acting and of a business career, but also a tribute to someone who has it in her to move millions of strangers.

About the Author:
David Thomson taught film studies at Dartmouth College and served on the selection committee for the New York Film Festival. He is a regular contributor to the Independent, The New York Times, Film Comment, Movieline, The New Republic and Salon, and was the screenwriter on the award-winning documentary The Making of a Legend: Gone With the Wind. His other books include The New Biographical Dictionary of Film, The Whole Equation: A History of Hollywood, Showman: The Life of David O. Selznick, Beneath Mulholland: Thoughts on Hollywood and Its Ghosts, and three works of fiction. Born in London, he lives in San Francisco with his wife and their two sons.


Review: A wonderful insight into an extraordinary Australian, who has made powerful choices and kept her dignity in a cut throat industy.