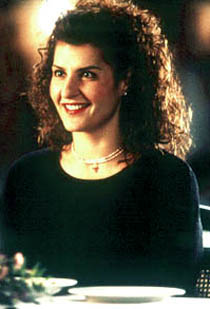 For Nia Vardalos, life is pretty sweet at the moment!
Tired of being constantly overlooked for acting work in Hollywood, Nia decided to take matters into her own hands. Recalling experiences from her colourful and very "Greek" upbringing, she developed the idea behind one of this year's most successful films. "My Big Fat Greek Wedding" in which Nia also stars in, has struck a chord with audiences everywhere, as has the leading lady who has been flooded with offers of work ever since. Such is the irony of Hollywood!

We recently spoke with the very funny Nia about her journey so far, the success of her first film and her surprise encounter with the Queen!

Was it always your intention to turn your one-woman stage show into a film?
Nia: No, not at all. I was just so creatively unsatisfied in Los Angeles, not being able to get any acting work when a girlfriend said to me one day, "why don't you do a one-woman show?" We had both noticed that a lot of stand up comedians had been getting development deals, just because they had a tight 10 minutes on dating! My friend said to me, "you've been telling those Greek stories at parties, why don't you do something on that?" It's true, one conversation with my dad and I'd have everyone on the floor! So I decided to do the show, as I felt so incredibly invisible in Los Angeles because I wasn't 22 and skinny.

So then how did the journey from screenplay to Hollywood feature come about?
Nia: Hollywood producers kept coming up to me and saying my stage show should be turned into a movie. But they wanted to make it into a Hispanic film and I said "Wait, what?" (laughs) So it was really their idea for which I wrote the screenplay myself.

How was the film different from the stage show? How did you extend the concept from a one-woman show into a full-blown feature?
Nia: It was really easy to do initially because I had done research and development on all those one-liners and story ideas. But then I had to go further because it takes me 10 minutes to describe something and only 1 frame of film to show it. I finished transcribing the stage show and it was only on page 60 of the screen play and I was like "oh no!" (laughs)
So I just went deeper and wrote in the whole B-story of the brother wanting to be an artist and I wrote in more of the mother's story of how she really can manipulate any situation and then it just went further and further and then it was too long! (chuckles)

Having managed to successfully bring your stage show to the big screen - do you identify with the character Toula in the movie and feel a little like "Cinderella" yourself?
Nia: Yes I do, I've had several moments in my life where I've felt like Cinderella. What is happening to me now is incredible. You know Stephen Spielberg knows my name! (laughs) Like that's nuts!

You've said in interviews before that Hollywood didn't know what to do with you pre-"Greek Wedding". How do they regard you now after having a multi-million dollar film under your belt that you wrote and starred in?
Nia: Actually a studio executive just said to me the other day, "well you know, it's chic to be Greek?" [in character voice] And I replied, "is it now?" (laughs)
Yeah I think it's interesting that they are now finding parts that I so magically fit into. But I don't really have a grudge, I am a middle child, I just want everyone to be happy! (laughs)

With the casting being predominantly Greek, was there a real sense of community while shooting the film?
Nia: Yeah definitely, it was possibly the loudest set you've ever heard! Everyday the joke was "where's the lamb?" as we went to break for lunch. I really liked it one day when Michael Constantine (Gus) came up to me and said, "I think I was born to play this part, I can retire now". We just knew then, before any of this happened that we were a part of something special. And all the cast referred to the film as "our movie", which I loved.

What did Gia Carides have to say about being a Greek-Australian actor as opposed to a Greek-American actor? Were there similarities there?
Nia: We laughed that Greeks are Greeks everywhere! You go into any church and there is always the same congregation. Everyone looks the same and everyone asks, "You married?" [with accent] (laughs) Gia would crack us up with stories of Greek-Australians.

You cast your husband in the movie - did he have to audition?
Nia: No, only at home! (laughs)

How did you find working with your husband?
Nia: In a marriage you try and be as honest as possible and keep everything kind of open. And I find if you act together, you're manufacturing emotions and it kind of goes contrary to what you're trying to achieve in a marriage. So we've never wanted to play husband and wife or people dating in a movie exactly for that reason.

Is John Corbett's character named Ian as a tribute to your husband Ian (Gomez)?
Nia: Yeah, Ian got baptised Greek Orthodox, Ian got swallowed up in my own big fat Greek family and Ian is the unconditional love that Ian Miller is in the movie. So I just felt it right to name the character Ian.

How did your family respond to the film when they saw it for the first time?
Nia: Well we had to mop up the theatre because there were a lot of tears! They are so supportive and are just the greatest family. Now they call me up everyday with ideas for sequels! (laughs)

The film is full of Greek idiosyncrasies; do you think that other people can relate to them?
Nia: That is what I found out; I didn't know at all that everyone has a crazy family. I thought I had written a Greek story and then a woman came up to me two weeks after we'd opened in the US and she said, "I'm Chinese and you're talking about MY family". And that's when I realised that "Greek Wedding" has crossover appeal.

What is next on the cards for you?
Nia: Well we have had some offers to do a TV show out of this, a sequel, a Broadway musical and all sorts of things. And I am open to all of them; we haven't made any decisions yet. I also have another movie called "Connie & Carla Do LA" which is about two broads, but it's not a chick flick!

Can you sing and would you star in a Broadway show?
Nia: Yeah sure, I did tonnes of musical theatre before all of this.

Two weeks ago you met the Queen, what was that experience like for you?
Nia: It was great, the Queen actually said to me "Phillip [Prince] is Greek you know", and I thought 'Oh my God, my dad is finally vindicated!' (laughs)

Has there been one specific incident after the movie released that made you realise that things are a lot different now?
Nia: Yeah, one day I was buying underwear at the mall and a woman tapped me on my shoulder asking me for my autograph. And she looked at the type of underwear I was buying and I thought, "Oh gosh, all my privacy is gone". That was it! (laughs)