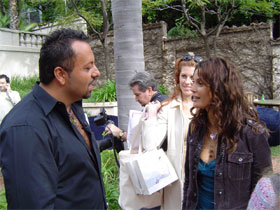 Napoleon Perdis became the 'talk of the town' with the annual Golden Globe Awards, where the brand took centre stage as the exclusive makeup sponsor of the Silver Spoon Hollywood Buffet, a special event which provides celebrities, stylists and media the opportunity to preview the 'looks' that will grace the red carpet on the big night.

An enticing array of Napoleon Perdis Cosmetics was showcased alongside various selections of fashion and accessories which were presented in a stunning 'buffet-style' setting over the two day event within the glamorous confines of the Wattles Mansion in Hollywood.

"The red carpet stroll has become an increasingly important and powerful way to showcase fashion, makeup and the like, with international media reporting extensively and in acute detail as to the looks worn by these influential celebrities", said Napoleon Perdis, founder of the Napoleon Perdis Cosmetics brand.

"Resulting media coverage has the power to ignite fashion trends and catapult designer brand names into the commercial market, and satellite events such as the Silver Spoon Hollywood Buffet reflect the significance of the fashion and cosmetic industry's belief in the importance of the 'red carpet factor", Perdis added.

While Australia enjoys a unique and special place as part of the industry that is Hollywood, where stars including Nicole Kidman, Naomi Watts, Hugh Jackman and Rachel Griffiths to name just a few are enjoying unprecedented buzz, many other talented Australians from the fashion and associated industries are now rapidly creating their mark. Perdis himself was extensively covered throughout US media channels in the lead up to the Golden Globes as one of the new and hip cosmetic brands favoured by the stars, a timely publicity blitz as the brand launches in leading department stores such as the legendary Saks Fifth Avenue this month.

Fuelling the Aussie flavour, the Napoleon Perdis showcase as part of the Silver Spoon event featured stylishly presented selections of iconic 'treats' such as lamingtons, Caramello Koala's and Tim Tams which were enthusiastically enjoyed by all (for the record, Caramello Koala's caused the most fuss).

Most significantly, rave reviews for the quality of formulation of the Napoleon products was unanimously generated, with the all important league of professional make-up artists who attended giving the brand the thumbs up.

"I couldn't be more delighted with the response", enthused Perdis, who is now based in New York for half the year to oversee the brand's debut into the lucrative US market.