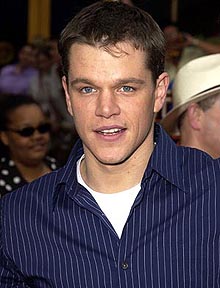 Matt Damon may be one of Hollywood's leading men, but he remains equally selective about the work he chooses. Currently treading the boards in London, Damon delivers a complex performance in the cerebral thriller "The Bourne Identity", as a man trying to figure out his identity while being hunted by the CIA. Damon talked to PAUL FISCHER.

Matt Damon needed to take that last puff of his cigarette before settling in for our interview in his Beverly Hills hotel. Generally health-conscious, smoking remains one of Damon's rare vices, he confesses smilingly, despite trying to give up two years ago. "I can't do it." The actor won't even try therapy. "I think it takes almost all of your attention and energy to do it when you smoke as much as I do, so if I were to focus my attention and energy to it, I could quit smoking, but my attentions and energies are now more concerned with trying to lose 40 pounds or this or that. I want to quit smoking so I know I will at some point, it's just a question of when I can marshal my internal forces to kind of fight that battle."

Damon still looks in great shape, the smoking notwithstanding and on screen in his first foray into the cinematic world of action hero as an amnesiac CIA operative in "The Bourne Identity". Preparing for the physicality of the film, Damon trained in a form of martial arts called Caulie for five months. "Doug [Liman, director] said that he wanted a character that could walk as a boxer and kind of look at other people, the same way boxers look at people. I guess he meant trying to do acting without too much weight put on ... box for the same amount of time for a couple hours a day." Damon also gets to do some mean shooting in the film, so the conscientious star "got all this expensive firearms training."

"The Bourne Identity" takes the spy genre and gives it an added depth, refuting the notion that this is some James Bond caper movie. "I think it's very different from that style of movie. Doug wanted to make it feel more like a European movie stylistically and a little more real than the Bond movies. Those are fun because they're so outrageous and he's constantly topping himself whereas in this, Doug really wanted the action to drive the story and never be gratuitous."

Asked if, like Bond, Damon would reprise the Bourne character for a sequel or two, the actor doesn't rule it out. "I'm not contractually obligated to, but if Tony wrote another great script then yeah, sure. I really liked everybody who worked on the movie. We worked really hard on it; we were in all these interesting places and had all these adventures together. I'd do it again."

As exhausting as it might have been shooting "The Bourne Identity", it doesn't compare to treading the boards, which he is currently completing in London with Casey Affleck. "Doing it has been great. The routine of it is very different than doing a film because we know exactly what we need to do every day. We show up for work for four hours a night, or a longer day if we're doing a matinee and the routine of it is something that I wasn't used to at all. You go to a movie set and you might have a gut-wrenching scene or you might be sitting doing a crossword puzzle all day. But that fear, that element of danger in doing live theatre is great because different things happen every night. It's a nice feeling."

As for how the British media has been treating this Hollywood import, Damon neither knows or cares. "I'll read the reviews after we're done and then I might consider slashing my wrists", he says laughingly.

With a screenwriting Oscar under his belt, Damon is one of Hollywood's most sought after stars, but he has resisted going too mainstream. Even "The Bourne Identity" has an Indie feel and tone to it. Damon wouldn't have it any other way. "That's where the great stories are and what I've been always been drawn to."

As big a star as Damon has become, there are no pretensions about the actor and even with the celebrity tag attached, he happily ignores that aspect of his profession, admitting that, really, this New York resident sees no downside to stardom. "There's not something to complain about because I really do get around pretty easily and nobody bothers me. I haven't been to the smaller cities, which would probably be a little bit more difficult, but I think because I live in New York and I'm constantly busy, I don't have time to notice the whole celebrity thing."

As far as normality goes, Damon has a girlfriend, has no plans for immediate fatherhood and laughs when reminded of friend Ben Affleck's woes of turning 30. "He'll be just fine", and Damon will be along to help him celebrate. "We and all his friends from home are going to get together and try and figure out some fun thing to do for his birthday. We'll probably just have a big party for him." After all, Damon adds, "that's what friends are for. "