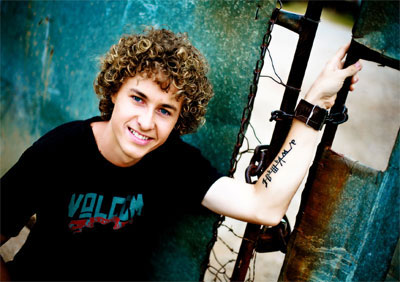 His age doesn't affect his lyrics- all motivating, relatable and with touches of romance. Even if you're not normally a fan of country music this beat and country style will have you making your way to the floor.

When he was 16 years old, Liam Brew was asked to write a school essay titled 'My Plans After School'. While his mates wrote about uni, surfing and highly paid jobs, Liam had only one goal: to win the Toyota Star Maker Quest in 2009.

At just 18, it was his first time in Star Maker, and he blitzed a top-class field to emerge the winner.

Just a few short months later, he's spearheading a whole new generation of country stars, with the release of his debut album, Wild Heart on the award-winning Compass Bros label.

While his predecessors- artists like Lee Kernaghan, James Blundell, Adam Brand and of course Keith Urban- were the first home-grown contemporary country acts, Liam is the first Gen Y male to launch himself on the country scene.

'I grew up listening to those guys- and a whole lot of American country music like Garth Brooks, Brad Paisley and Kenny Chesney. All of that music has influenced me,' Liam said.

'Now I feel I'm part of a new wave of country music, one that will connect with a new generation of fans, the kids I've grown up with.'

The parallels between Liam and one of his biggest influences, Keith Urban are fascinating, and a little eerie. The pair grew up just a few kilometers apart near Caboolture on the Sunshine Coast. Liam was born the year Keith Urban won Star Maker. And the first talent quest he own-in the Junior Mal category- has been won by Keith two decades earlier. Their names are engraved side by side on the trophy.

These days, Liam regularly performs at the same venues Keith played as a young artist, and their music has a similar quality- an energy and freshness that is unmistakable.

'The day after I won Star Maker, Keith did a video cross from Nashville to congratulate the new Star Maker winner, saying he'd hoped I'd go as far as him. It was pretty cool to think he was saying that to me!' Liam said.

For now, through, Liam realises he has to build his career from the ground up. A graduate of the Tamworth Camerata and the College of Country Music, he's already put in the groundwork, and now he's made a sensational start to his recording career with Wild Heart.

The album was produced by Graham Thompson, and features a swag of world-class songs as a vehicle for Liam's fresh and vibrant vocal style.

Wild Heart is pure country with a very cool, contemporary edge. There are plenty of songs that rock out, including the first single, 'Girls with Girlfriends'- just released on to CMC with a wonderful video clip- the catchy 'Like I'm Famous' and the cruisy 'Hangin' Around'.

But there are also several songs on Wild Heart that show Liam's more thoughtful side. They include the evocative title track, 'Wild Heart', written by fellow Aussies Sam Hawksley and Jedd Hughes, and the wonderful 'Rented Houses'.

Another Star Maker success story, Travis Collins, joins Liam for a duet on the exquisite 'A Woman Can Do That to a Man', a song that Liam admits took his breath away when he first heard it.

'I think part of the shift to this generation of country music is that willingness to express emotion, to be vulnerable. It's also about not taking yourself too seriously,' Liam said.

'The girls in my generation are coming across as strong and assertive, but for me it's the opposite- I want my music to be emotional as well as fun, and I want it to say something.'

Wild Heart will be launched at this year's Gympie Muster. It's a nostalgic journey for Liam, who won the Muster Talent Search two years ago, at the age of 17.

'I've always fantasised about doing Friday night on the main stage at the Muster, and I'm really excited about it- especially as I'll be launching the album and doing a signing afterwards. It's a dream come true for me, and it's just the start,' Liam said.

How does it feel to be on the same path as Keith Urban?

Liam Brew: It is a bit uncanny how a lot of his early career is very similar to what I have been doing over the last few years. He was been a huge influence on me so to think that he came from this and went on to achieve what he has is such a confidence booster and really makes me feel like anything's possible.


Does it motivate you having so much in common with Keith?

Liam Brew: Yeah; definitely! It was a huge thing for me when I first got my name on a trophy beside his but to be added to the list of Star Makers and knowing how much he credits Star Maker for getting him where he is now is a really motivating and encouraging thing.


How does it feel to hear your song on a CD?

Liam Brew: I think relief is the first emotion I felt. To finally have the opportunity to really make something out of music which is what I have always wanted to do is such an exciting thing. I can't wait to get out there, play the songs live and really make the most of it all and continue to achieve what I want to, in Australian country music.

Liam Brew: Song writing is such a rewarding experience for me, to be able to turn even a small moment of your life into a song and share it with people is really cool. I also really enjoy the process of working on the skills of song writing and constantly learning something every time you do it. The best part of it for me though is when there is something that is really playing on your mind or something that is really toying with your emotions at the time, you can write a song about the situation and it is the best therapy.

Liam Brew: I've always loved country music. Artists like Garth Brooks, Brad Paisley, Keith Urban and Dierks Bentley are usually on high rotation in my CD player but lately I've been branching out a bit listening to some other stuff and really enjoying it. Bands like Kings of Leon, Thirsty Merc and even a bit of Katy Perry!

Liam Brew: I LOVE performing live....as much as I enjoyed recording for the first time with my debut album, there is no substitute for getting in front of a huge crowd and rocking out. That moment is why I do this for a living.

Liam Brew: I think as a young kid the two people I could thank for giving me the bug would be Garth Brooks and Lee Kernaghan. These guys were like Gods to me when I was little and all I wanted was to be like them....so it's their fault!