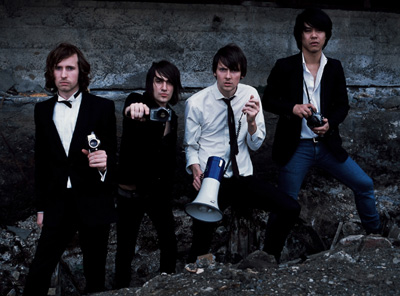 Melbourne 'Apocalyptic-Disco-Noir' four-piece Foxx On Fire are releasing their debut EP titled White Sands and embarking on an East Coast tour in association with the release. Their first single Into The Light was released on 25th September 2009 and made it into The Music Networks recommendations for 'Singles to Alternative Radio' for that week.

Describing their music as 'Apocalyptic Disco-Noir' for the dance floor, this up and coming Melbourne four-piece have spent the last few months tucked away recording their debut EP White Sands. The EP will launch today October 23 and they are now preparing to head out on the road in November and take their psychedelic sounds to the masses.

Since their formation in 2006, Foxx On Fire have played over 100 live shows including St Kilda Festival and supported the likes of Art vs. Science, Bluejuice, Midnight Juggernauts, Lost Valentinos, Grafton Primary and Ghostwood. Their past singles 'Polizia' and 'Mission Abort' have been Indie Clip of The Week on Rage, with Polizia scoring single of the week on RRR and SynFM and Mission Abort being chosen as iTunes single of the week and featured on triple j Unearthed. Foxx on Fire have also dazzled audiences reaching the finals at both MTV Kickstart Competition, Tooheys Extra Dry uncharTED and recently won the Diesel:U:Music competition.

Geno Carrapetta: What a wonderful feeling.

Geno Carrapetta: My thoughts were that it would be the same as any industry depending on what area you what to work it will treat you accordingly, I still think that.

Geno Carrapetta: We have just released our Debut EP White Sands and are about to embark on a tour of the East Coast throughout November, which is not to be missed!

Geno Carrapetta: I used to contemplate this quite regularly but since the group therapy sessions not so much anymore.

Geno Carrapetta: I really love when we have new recorded material although the process is usually quite long and sometimes painful, so I will have to go with performing live.

Geno Carrapetta: Being able to allocate enough time to every area of life, sometimes with busy schedules various necessary areas get neglected.

Geno Carrapetta: There's nothing typical about my days, anything could and usually does happen.


What has been your favourite part of becoming a music artist?

Geno Carrapetta: The strange and interesting opportunities that have arisen out of being a member of Foxx on Fire.

Geno Carrapetta: I would love to collaborate on a duet with Julio Iglesias, I think that would be good for my career and the memoires.

Geno Carrapetta: No I am not single, what do I look for in a partner? Perfection.

Geno Carrapetta: Yes, www.foxonfire.com it has lots of treats to keep you entertained.

Geno Carrapetta: There is actually only one thing required and that is self indulgence.

Geno Carrapetta: We love you immensely, every single one of you, please buy our new EP.

Geno Carrapetta: It came to me in a prophetic vision I experienced where 80's icon John Foxx handed down to me to me a burning sceptre, this resulted in a brief period of identity crisis where I thought I had become John Foxx and eventually led to the formation of the band.

Full Name: Geno Carrapetta
Nickname(s): None
Star Sign: Pisces
Music Talent: None
Favorite Food: Seafood
Favorite Film: Salo
Favorite Actor: Terrence Stamp
Pet: None
Describe yourself in 3 words: Boy next door
Best Feature: Modesty
Worst Feature: None
Person You Would Most Like to Meet: Julio Iglesias
Hobbies/Interests: Transcendence
First Job: Child Actor
Are you a Pub, Bar or Club kind: Bar
What Can You Never Leave Home Without: Pants
What is the first thing you think of when you wake up in the morning: Coffee
White Sands Tour November
Monday 2 November 'Melbourne Cup Eve'- The Birmingham, Melbourne, VIC
Tickets $10, available on the door, 8pm.

To check out their music, or for more information visit www.foxxonfire.com
White Sands EP will be available on iTunes from 23rd October 2009.