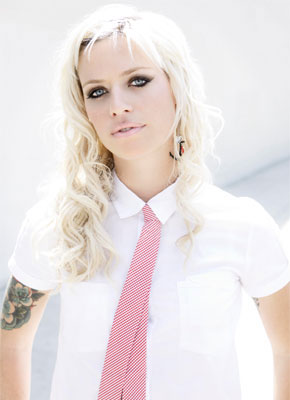 Up-and-coming artist Gin Wigmore's debut album 'Holy Smoke' looks set for success after her single 'Oh My' was added to Australian radio in August 2009 and subsequently became the number two most added track. 'Oh My' was the popular Single Of The Week, the week it was released, on iTunes and notched up a staggering 19,819 downloads.

On September 25 2009 Gin released her debut album Holy Smoke which she created with producer Mike Elizondo (Fiona Apple, Regina Spektor, Eminem, Nelly Furtado, Maroon 5) and with The Cardinals as her backing band .

Gin was born in Auckland and lives in Sydney, she is one artist Australians will definitely be proud of.

Holy Smoke showcases Gin's ability and talent- maybe she is so talented because she grew up surrounded by music and recording studios. At the age of 13 she helped her best friend's dad produce demos in his home studio and at the age of 14 she won an open mic-night at a local bar- the only problem with winning was that she wasn't allowed back as they realised she was underage!

Gin's debut album is a collection of café, driving and casual-drinking songs, all of the songs making you want to tap your feet to the beat and sing along. Gin is like no other Australian artist; she is an individual with a rock-pop album that is ideal for all different types of genre-lovers. Catchy tunes and perfect lyrics combine to provide high class music; this is one debut artist you might just want to keep your radar on. Once you've heard Gin sing, you won't forget the name.

How does it feel to have Perez Hilton as a supporter of you music?

Gin Wigmore: It's awesome! Anyone that supports my music will always makes my life that much peachier.

Gin Wigmore: That's a tough one, I would say a real mixture. You get a bit of soul, blues, pop, rock and dub out of my music I think.


One rule you live by?


How did it feel to hear your song played all over the airwaves?

Gin Wigmore: A real achievement and a clear milestone for how far I have come in my career. But, I also get a little giddy when I'm strolling down the supermarket aisle and on pops my songs.

Gin Wigmore: That it's going to be a long and tough road. And I was right!

Gin Wigmore: Yes, that's the best bit. I would be an absolute wreck without my writing. My inspiration is living life, people and situations I get into.

Gin Wigmore: I adore Benji Hughes. Frank Sinatra is total escapism for me and, the Raconteurs because I love loud big rock music.

Gin Wigmore: I'm playing a few shows with my band so you can all hear songs from my new album in the next couple of weeks. Go to: www.myspace.com/ginwigmore to check out details.

Gin Wigmore: I knew I wasn't cut out for University or anything academic or logical. I hate the thought of working for someone from 9-5. And really music is the best most fulfilling job I could ever think of doing. I always find myself so fortunate to have a job that is what I like to do when other things in life go bad. I go to my job and feel awesome after being at work all day. I don't think any other job will make me feel like that, so I'm sticking with it for as long as I can!

Gin Wigmore: I have two artists I would love to work with. Paolo Nutini and Dr. John.