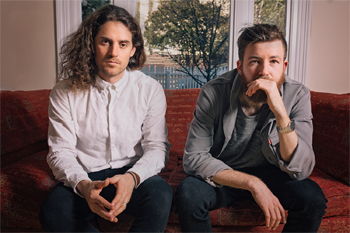 Currently mid-national tour, Holy Holy have today revealed details of their sophomore LP alongside the announcement of their new single, Elevator (out today).  Their anticipated new album will be titled Paint, and is set for release on February 24, 2017.  The release comes at a busy time for the band, who have just embarked on a massive national tour which has already seen them play packed out shows in Adelaide, Bunbury, Perth and Fremantle, with upcoming shows set to hit a sold out Corner Hotel in Melbourne, Geeling, Ballarat, Newcastle, Sydney, Wollongong, Canberra, Gold Coast, Sunshine Coast and Brisbane in the coming weeks.

Buoyed by arpeggiated synths and the band's classic driving guitar lines, a nostalgic yet contemporary feel and a chorus that will not leave your head, Elevator propels even further into exploratory territory.  Vast and satisfying, with a clear, affecting narrative, Elevator is an exciting taste of Holy Holy's enigmatic new album expected to drop in early 2017.  Lead guitarist Oscar Dawson reflects on the writing process of the track, 'I can't recall how it germinated, but before we knew it we were playing this same two chords, over and over.  And it built from there, like a conversation; starting softly, then bouncing around to become louder and louder… It had been caught on a phone when we were touring in Europe, and back in Australia we put it together and decided that, in fact, it is a song."

It has been a remarkably eventful year for Holy Holy, who have been writing and recording their eagerly awaited new album featuring singles, Elevator and Darwinism in between wildly successful national and international tours.  The band were hand-picked to record an intimate performance of Darwinism for the world renowned Mahogany Sessions in the UK, who have just announced their partnership with Distiller Music, with stunning results. They dropped into their Bath studios whilst on their recent European tour which saw them selling out their third London show, several shows in The Netherlands and playing packed showcases at Reeperbahn Festival in Germany.

If the critics are to be believed, now is the time to catch Holy Holy live.  With Darwinism reaching the coveted #1 most played spot on Triple J, debut album When The Storms Would Come being nominated for Triffid Queensland Album of the Year 2015/16, Dawson being nominated for Guitarist of the Year at THE NATIONAL LIVE MUSIC AWARDS, the band making the Vanda and Young Songwriting Competition Longlist this year, not to mention Liam Gallagher addimg himself to their long list of supporters, they have become a band that is impossible to ignore.

In light of these achievements, lead vocalist Timothy Carroll is thrilled to be back touring in Aus, saying, 'It's great to be out on the road again - especially with a bunch of new tunes to try.  We're in the studio again in December so this a last chance to try some songs out before we get them carved in stone....or vinyl as the case may be."

Paint is available to pre-order now.  All album pre-orders will receive Darwinism and Elevator instantly.

Tickets available from www.holyholymusic.com | 1300 GET TIX | All Moshtix Outlets

*Dream Rimmy appearing in place of I Know Leopard