Katie Noonan and The Captains 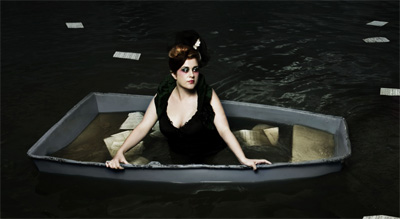 Katie Noonan and The Captains

Katie Noonan (previously from the groups 'George' and 'Elixir' ) has returned to the music scene to release her forthcoming new album Emperor's Box, with her newly formed band, The Captains.

A five-time platinum recording artist, Katie Noonan absolutely shines on this album, and she proves why her vocal talent has made her the successful recording artist she is today.

Emperor's Box is made up of thirteen personal, emotive works and was co-produced by Katie and Grammy Award-winning rock specialist Nick Didia (Pearl Jam, Stone Temple Pilots, Powderfinger). As a mum, Katie has focused a number of her songs on her experience of motherhood. 'Sweet One' which she wrote with Sia, touches on the tough times, and the appreciation of friendship, and the track, 'Cotton Wool' co-written with Josh Pyke, touches on the special bond between mother and child.

Emperor's Box is a soft and sweet sounding album, with the title song Emperor's Box reminiscent of a lullaby. My favourite song from the album is called Half in Water. The melody and the beats remind me of the sort of music you would here on the soundtrack to a movie like Twilight or some other teen angst ridden drama.

Some of the music does however, begin to sound a bit repetitive but I believe that's the worst that I can say about this album. Katie and the Captain's have put together quite an impressive collection of songs to sit back and drift away with.

Katie Noonan: Amazing! Incredible particularly as we never made music for the purposes of commercial success/viability so to have our little precious songs heard by many was wonderful!

Katie Noonan: Being the daughter of an opera singer I knew it was hard work and you had to really love it to survive; having said that, the greatest thing is being able to be part of such an enormous, wonderful life-affirming thing.

Katie Noonan: Yes, I write all my songs or co-write them with other musicians I admire or connect with. I had the great privilege of writing with a wonderful list of Anzac luminaries on my new album - including Tim Finn, Don Walker, Tom Shapcott, Sia and Josh Pyke.

Katie Noonan: The EP is out now and The Captains and I are touring our little butts off, yet, having a ball doing it! It is great playing all the new songs and connecting with audience. The album is out April 9 and then we will be touring throughout Australia.

Katie Noonan: Not really... Sometimes when you get caught up in all the crappy stuff that is not about music it gets hard, but then music just lifts you up again!

Katie Noonan: Ohhhh I love both but I guess ultimately connecting with people at a gig and sharing in something wonderful is the ultimate high.

Katie Noonan: Many, many people inspire me to do what I do - but mainly I am inspired by people who are obsessed with creating their own voice and sounding like no one else - everyone from John Coltrane through to Bjork, Jeff Buckley and Elbow.

Katie Noonan: Just sticking to your guns and maintaining your integrity. Learning to listen to your voice even when people are trying to pull you in different directions; with this current record I did this more than ever and am very happy!

Katie Noonan: Well, I will take you through today shall I? Woke up , had a latte and haloumi/mushroom bagel at Cafe Giulia's, picked up the band in the van, drove about three hours to the Hunter Valley, did a sound check, got dressed for gig, performed the gig, then signed merchandise and met lots of lovely folk. Then we packed our gear up, packed the van, drove back to Sydney- whilst I wrote this interview, on my laptop in the car. Then I crashed at the drummer, Declan's, house in Bondi, watched some Rage whilst looking at emails. I then looked at new album artwork and photos before reading my book and falling asleep...Do it all again tomorrow!

Katie Noonan: When people come up and tell me that a particular song of mine means something to their life - that is the ultimate reward.

Katie Noonan: Happily married to my husband Zac - a wonderful partner, musician and co-parent to our wonderful little boys Dexter and Jonah.

Katie Noonan: I'm so excited about the new album and really looking forward to sharing the new songs with you.

Katie Noonan: Music is like travelling without moving... and myself and The Captains will help steer the ship...jump on board! 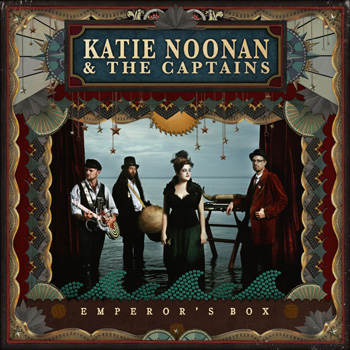