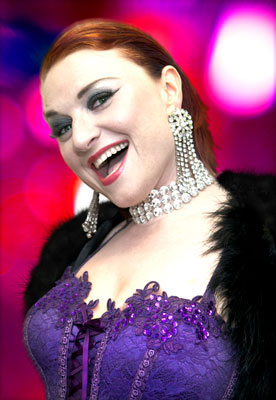 Katherine Ellis is one of dance music's most respected and versatile singer songwriters. A mainstay of the genre past and present, Katherine has been making records since 1990 with various Producers.

She is currently performing extensively throughout the World with her vast back catalogue including the huge club hits 'When you touch me' with The Freemasons, 'Lost' by Roger Sanchez and 'Dreaming' by The Ruff Driverz, ASBO's 'Let The Beat Hit 'Em' and Wilder & Clarke's 'Stand Up', both released on the Hed Kandi label as well as Make A Move On Me by Joey Negro.

From 1997 to 2000 Katherine was the vocalist for chart toppers The Ruff Driverz, singing 'Deeper Love', 'Don't Stop', 'Shame' and the monster smash 'Dreaming', which she also wrote the Spanish topline for. In 2009, Maelstrom re-released the track with a host of new mixes.

Last year Katherine performed across Europe, Russia and the USA and she completed a tour of Australia with The Freemasons, which culminated in a headline performance at the Sydney Mardi Gras. She was also involved with and performed at the launch party of The Freemasons' album, Shakedown 2 and joined them again in Manchester for Manchester Pride in August. Other notable appearances included the opening party for the Ministry of Sound at Mansion in New York, Salvation in Moscow as well as London, Soho, Brighton, Blackpool and Torquay Pride festivals. It was also a busy year for collaborations and in between her travelling she managed to work on some exciting new projects with Solitaire, Soulshaker, Bimbo Jones, The Str8jackets, Addict DJs, Beaver & Jones and Lee Coombs. The track 'You're mine' with Solitaire was put out via K Klass' label, Muzik K at the beginning of December 2009.

2008 was an extremely busy year for Katherine, with releases including 'When You Touch Me' with The Freemasons, a cover of "Ain't Nothin Goin' On But The Rent" with 7th Heaven, "Poza (Got What I need)" with Countparis, "Do it" with DJ Prom, "Gotta get Through" with Paul Emanuel & Gav McCall, "One Luv" with The Soul Avengerz and "Laisser Toucher" with Cerrone, which also happens to have been featured twice in the French movie 'Disco!'

Katherine also performed over 60 live shows in 2008 including The TMF Awards in Antwerp which is broadcast to some 60 million people, the Graham Norton Show on BBC TV and NRJ in the Park, Belgium to 50,000 people. She has performed in countless Russian super clubs such as Dyagilev, Most, Rai and Opera. Equally at home with smaller crowds Katherine is frequently hired for private parties and Restaurant openings, a Promoter in Kiev observed that 'Katherine brings the Party, she is the Party'. As well as performing her Club PAs Katherine is also a celebrated jazz, blues and soul vocalist with a full repertoire of over 200 well-known standards. Accompanied by a pianist Katherine will give you an intimate unforgettable night taking you through the full range of emotions from laughter to tears.

Katherine is the third member of the band Bimbo Jones, signed to Tommy Boy Records. The debut album 'Harlem 1 Stop' was released in the US at the end of 2008. This was preceded by their single 'And I try', the 2nd single 'Freeze' was released in February 2010.

She has worked with some of the biggest names in music including The Freemasons, The Soul Avengerz, Dave Lee (in all his guises!) & Roger Sanchez, and on a more underground tip, collaborations with Meat Katie, Dylan Rhymes, Lee Coombs and Tom Stephan. Katherine's touring credits include that of working with the likes of Belinda Carlisle, Chaka Khan, Boy George and Roger Sanchez. She is the vocal talent on TV adverts for Gaviscon, Dove Deo, Horlicks, Sony, Xenadrine, Hot Pockets, Google and Pantene to name a few. Her voice also appears in movies Evita, The Lawnmower man and What A Girl Wants with Colin Firth and Kelly Preston.

An extremely talented writer, she writes the majority of her own material including 'When you touch me' by the Freemasons, 'Insatiable' by Mark Knight - hammered by the likes of Pete Tong, 'Fascinated' by Raven Maize and 'Getting Into You' by W.O.S.P. She also writes for other Artists including 'If You Wanna/Salsoul Nugget' by M&S Presents The Girl Next Door, 'All Night' by Montilla and 'Dancing In The Dark' by 4Tune 500.

Katherine is a true performer who lives for the stage and gives her all, engaging and transporting her audience whilst wowing them with her incredible voice. 2010 is already jammed packed with new performances, new releases and new collaborations giving the signal that the year will emulate the successes of both 2008 and 2009, continuing to opening up new and exciting opportunities for this 21st Century Diva

Fierce Angel
Fierce Angel events always start with a bang, setting the tone for the next ten hours of solid dancing to house and disco music.

Enter the world of Fierce Angel, and you'll be transported to an unknown hedonistic world, with opulent deco, eclipsed only by the sassy Fierce Angel Showgirls, who can do everything from eat fire, roller skate, stilt walk, and of course, dance a mean podium!

Tell us a little bit about Fierce Angel Adelaide?


What are you looking forward to most about the upcoming Fierce Angel events?

Katherine Ellis: Seeing all my Sydney fans again and also meeting some new ones in Adelaide!


You've been making records since 1990, how has your music life change?

Katherine Ellis: It's constantly evolving, I write a lot more of my material these days and I have more money ;-). Although I now have the commitment of property and a family so it doesn't especially feel like it ;-)

Like everyone I am more confident now I'm older and also wiser about the business side!

Katherine Ellis: Of course! I thought it would be much easier than it is! It's very hard work, long hours, and requires a thick skin and determination!

Katherine Ellis: I don't see the tour ending at this point! Yes lots more singles, no album at this point although I think someone should sign me up for one, don't you?
Singles:
Feed the Fire / Katherine Ellis and the Studiopunks on Blanco y Negro
This Time /Damien Strong and Katherine Ellis on News
Soulshakers - Time 2 Play (Audiofreaks)
Alex Nocera - Living for the Sundown
Addict DJs - I'm coming out
Katherine Ellis & 3DR Mafia - Little bit of love
Mr D.Y.F & Katherine Ellis - All day lover.

Katherine Ellis: I have always sung along to all music, according to my Mother it started when I was 18 months, I had an overwhelming urge to be on stage, it was something I had to do, age around 13, albums by Meat Loaf, Janis Ian, Vinegar Joe, Fleetwood Mac, Pink Floyd, James Taylor, Carly Simon, Blondie, Bob Marley and the Police were a huge inspiration, I just love pop music.

Katherine Ellis: Probably when I'd spent five years working on a project that fell through, probably the main reason why I work on single projects as a featured artist now, it was souk destroying! Or having a massive hit record and not being paid for it! These things are sink or swim scenarios and I'm a swimmer!

Katherine Ellis: During the week I get my sons of 10 and 7 to school, then I go to the gym, then I spend the next four hours writing, recording and running my business. Then I get the kids and me and my husband juggle looking after them with our work till about 7 when we have dinner which Max; my husband cooks, then we go back to work, he is an Illustrator. Or we watch a movie if we are too tired! At the weekends I fly round the world showing off in nightclubs!

Katherine Ellis: Being able to make a living out of my passion.

Katherine Ellis: I really don't know, I'm asked this question a lot but there isn't anyone that really springs to mind in particular.


Can you tell us five things required for a happy healthy & enjoyable life?

>Full Name: Katherine Jane Margaret Ellis
Nickname(s): The Diva
Star Sign: Gemini
Music Talent: Singing and songwriting
Favorite Food: Sushi
Favorite Film: Orange County
Favorite Actor: Bill Murray
Pet: Poo Poo the bearded Dragon
Best Feature: Eyes
Worst Feature: Flabby bits
Person You Would Most Like to Meet: Jack Black
Hobbies/Interests: Pilates, Reading, cycling, piano, languages
First Job: Babysitting
Are you a Pub, Bar or Club kind: Club
What Can You Never Leave Home Without: My iPhone
What is the first thing you think of when you wake up in the morning: The plans for the day!