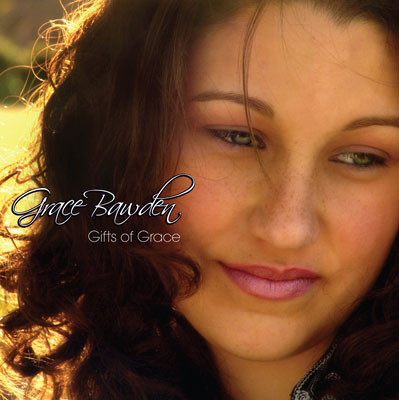 Grace Bawden is the young classical vocal pop artist from Adelaide, Australia. Grace Bawden is still studying, but that hasn't stopped her from performing on Channel 9s Today and becoming a finalist in Channel 7s Australia's Got Talent- in which she received rave reviews from Danii Minogue and Olivia Newton-John.

"Grace has one of the most beautiful voice I have ever heard" - Olivia Newton-John
"I think we've found somebody who could represent us internationally as a really special opera singer." - Danni Minogue

Described as one of Australia's greatest operatic discoveries, classicalcrossover Soprano, 16 year old Grace Bawden's voice has already been likened to a Stradivarius by some of Australia's most esteemed vocal icons. Destined to become Australia's answer to Dame Kiri Te Kanawa, Grace's unique vocal talents are an unearthly, powerful and moving marvel, whose voice lingers in the memory and touches the hearts of her audiences of all ages.

Grace is years beyond her age with her mature, operatic voice that can soar from highs to lows across almost four octaves. Her warmth, personified in her smile and delivered in her voice, has made her an instant success with people of all ages.

Chosen from a field of over 600 applicants from across the globe, Grace performed as Soloist in her sold-out show at the Sydney Opera House for World Youth Day 2008, to a standing ovation. Shortly after this, Grace started work on her debut album 'Gifts of Grace' with international producer, Audius (Delta Goodrem, Jessica Mauboy, Rahsaan Patterson). "Gifts of Grace" is a blend of contemporary and classical songs in the most original interpretation of some of the world's most favourite songs and songwriters.

Songs such as 'Streets of Philadelphia', 'Now and Forever' and the 1st single Man of Colours (made famous by Icehouse), all sound amazing in this classical-crossover genre. "Cold Outside" features the South African Soweto Gospel Choir and almost creates a new genre; with a unique blend of an R&B melody, African sounds and Grace's dynamic and resonant Soprano vocals. This album promises to set the benchmark for contemporary classical Australian music in a way no other Australian artist has done to date.

Grace Bawden: I'm still pinching myself. I can't believe its happening even now.

Grace Bawden: Yes, like most people, you think its as easy as sending a few demos to a record label and hoping that someone might pick up on what you are trying to do and then magically getting "discovered", but its nothing like that. It's a lot of hard work, networking and meeting the right people who share your dreams and working with a team of trusted professionals who all know what to do.

Grace Bawden: I love writing my own songs but that takes a lot of uninterrupted time and I have to be quite relaxed when I do it. It has to be fun, so it helps to write music with people I enjoy being with. My inspiration can be anything around me, the people I love and the places I'm at.

Grace Bawden: Anything that is Twilight-related. Im a typical teen, what can I say? But I love Leona Lewis, Kelly Clarkson, Jordan Sparks, and Delta Goodrem, but then I also love Sarah Brightman, Hayley Westenra and Josh Groban. I have a very broad taste in music, including Barbara Streisand and Nana Mouskouri, amongst others.

Grace Bawden: My Debut single will be the Iva Davies (Icehouse) classic, "Man of Colours". I really would LOVE to do a tour, but that will take some time and planning.

Grace Bawden: Not really. Even though it is tough trying to realise my dream, I choose to take every day as it comes, and make the most of the journey to the destination - wherever that is? I try always to count my blessings and not think too much about the things I may miss out on, because when one door closes another one always opens and sometimes better things have come my way when I never expected them to, like meeting Richard Wilkins and being invited to perform live on the Today show in Sydney or being invited by Mark Holden to appear on live radio and, because of that finding my first major investor.

Grace Bawden: Oh, that's a hard question. I love both, but probably live performing, because I enjoy meeting new people and seeing how they react to my music. However, I just loved, loved, loved recording with Audius and wish I could do more with him. He's a bit like a little kid too and he knows how to bring the best out of you. I thought the first time in the studio was going to be either boring or scary, but it was neither thanks to Audius.

Grace Bawden: Actually, it was a friend of my mum's, Nigel Jones (Karma) who helped me record my first demo because he wanted to encourage and help me after he heard about me through other friends. He did three demos in our lounge room and mum then sent the first demos to The Sound Academy in Sydney and one thing just led to another from there. I then went to record another three track with Audius and I guess I stuck with it because people seemed to like what I was doing. After the official demo with Audius, then Richard Wilkins gave me my first big break on national television, so I am really grateful for those opportunities.

Grace Bawden: Knowing who to believe and trust and who to avoid. There are people around who want to exploit young kids without much experience and get them into bad business deals, but I am lucky I have people like Jamie Huber from Hype 33 who has been managing a lot of my career so far and he's really looked out for me since day one. A lot of people that say they want to represent you but often let you down, but Jamie loves his job and works hard for all of his artists and I couldn't be luckier.

Grace Bawden: There is no such thing as a "typical" day. I have no routine at the moment. It used to be school and regular singing, theory and piano lessons, but now I'm jumping from school to lessons, rehearsals and performances at all odd hours and days. I usually don't get to know until the day before what I am doing the next day because my diary keeps changing.

Grace Bawden: Learning new things about the industry. There is so much more than just singing, like public speaking, learning how to handle media interviews, how to handle difficult people, time management and being organised and many other things besides. I also love talking to kids because I think they see me as a role model and they always have a lot of questions to ask.

Grace Bawden: That's hard and easy at the same time... but I can't help but say Josh Groban. I saw him in concert for my 15th birthday and it was the best concert ever. He was really friendly and funny and his music is brilliant. He stayed and chatted with me and I managed to get a photo with him, which sits in my lounge-room.

Grace Bawden: Yes, I'm single, but I'm not looking for a relationship for now. I just want to focus on my music for a while. It's too hard to be in a relationship and I don't want to let anyone down because I can't be there for them when they need me. I don't want a partner having to wait for me to clear my diary to spend time with me. It's not a nice way to treat anyone you love.

Grace Bawden: Focus on family, work hard at whatever you do, count your blessings, pay it forward to others wherever you can and don't waste time worrying about small things.

Grace Bawden: I love meeting my fans and really appreciate their support. I hope they'll hit me up on Facebook or Twitter and let me know what they're doing.


60 Second Quiz
Full Name: Grace Bawden
Nickname(s): "Bunny"
Star Sign: Libra
Music Talent: Singing (Coloratura and Lyrical Soprano)
Favorite Food: Nachos
Favorite Film: A walk to remember (and Twilight, of course!)
Favorite Actor: Robert Pattinson
Pet: Two "feral" cats Benny and Angel
Describe yourself in 3 words: Fun, happy, loving
Best Feature: My smile.
Worst Feature: I wont say, because then you'll know...lol... but I love to sleep.
Person You Would Most Like to Meet: Actually, there are two. Sissel Kyrkjebo (Soprano from Norway) and Yulia MacLean (Soprano from New Zealand), they're simply amazing!
Hobbies/Interests: Cycling, walking, swimming
First Job: Office duties for my Auntie over Christmas
Are you a Pub, Bar or Club kind: Pub, but preferably, cafe or restaurant.
What Can You Never Leave Home Without: My mobile phone
What is the first thing you think of when you wake up in the morning: What's in my diary?