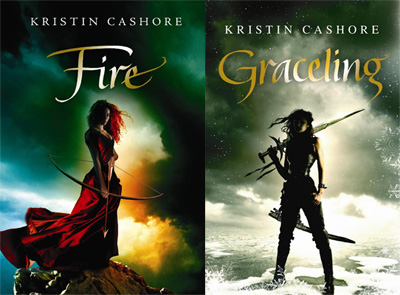 FireBeauty is a weapon - and Fire is going to use it...

Set in a world of stunningly beautiful, exceptionally dangerous monsters, Fire is one of the most dangerous monsters of all - a human one. Marked out by her vivid red hair, she's more than attractive. Fire is mesmerising.

But with this extraordinary beauty comes influence and power. People who are susceptible to her appeal will do anything for her attention and for her affection. They will turn away from their families, their work and their duties for her. They will forget their responsibilities to please her and worse, crush nations, neglect kingdoms and abuse their power.

Aware of her power and afraid of it, Fire lives in a corner of the world away from people and away from temptation. Until the day comes when she is needed - a day when, for her king, she has to take a stand not only against his enemies, but also against herself...

Graceling In a world where people born with an exceptional skill, known as a Grace, are feared and exploited, Katsa carries the burden of a skill even she despises: the Grace of killing. She lives under the command of her Uncle Randa, King of the Middluns and is expected to carry out his dirty work, punishing and torturing anyone who displeases him. Breaking arms and cutting off fingers are her stock-in-trade.

Finding life under his rule increasingly unbearable, Katsa forms an underground Council, whose purpose is to combat the destructive behavior of the seven kings - after all, the Middluns is only one of the seven kingdoms and each of them is ruled its own king with his own personal agenda for power. When the Council hears that the King of Liend's father has been kidnapped Katsa investigates...

But something dark and deadly is rising in the north and creeping across the continent and behind it all lurks the shadowy figure of a one eyed king...

Kristin Cashore grew up in the countryside of north-eastern Pennsylvania in a village with cows and barns and beautiful views from the top of the hill. She lived in a rickety old house with her parents, three sisters, and a scattering of cats, and spent her days reading and daydreaming.

During her stint in Boston, Kristin got an M.A. at the Centre for the Study of Children's Literature at Simmons College which got her thinking and breathing YA books, and, got her writing.

Since Simmons, Kristin hasn't stopped writing, not once. Kristin has been writing full-time for about 8 years now, first doing educational writing for the K-6 market and now working on her novels. 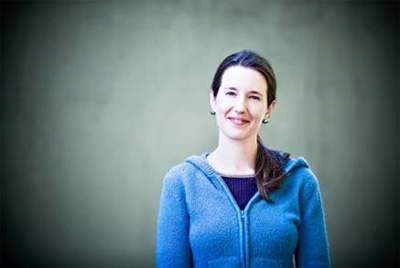 Question: How did you come up with the ideas for Fire and Graceling?

Kristin Cashore: For me books tend to start with characters. I am always daydreaming and characters grow in my mind and they come to me already having relationships of one kind or another with each other and I listen into their conversations. Often they are arguing, angry or amused and I almost feel as the book begins to form I am listening into the characters to try and get to know them, better. Once I get a grasp of who the characters are and why they're so upset or whatever I try to hammer out the plot. For me, it is really fun at first because it is just daydreaming and listening in - that part is not hard and once I become fond of them, that is when the hard part begins.


Question: Do you base your characters on anyone you know?

Kristin Cashore: I never have before. I am often asked that and I really never have. I think if I did do that it would be distracting because I need to be differentiating the real world from my characters and I don't want to write a character who is someone in the real world because then I will be distracted by the real world person or worried about offending someone or treating them badly in the book.


Question: What authors did you grow up reading?

Kristin Cashore: Growing up I read a lot of children's literature. I read Charlotte's Web and I had a Nancy Drew period where I read every Nancy Drew book I could get my hands on and I read a lot of classics like Jane Austen, Anne of Green Gables and Charles Dickens. I didn't read a lot of fantasy, although I did read a fair amount of Madeleine L'Engle and many English classics that were period pieces that I think influenced the medieval type feeling of my books.

Kristin Cashore: I do! There are a few pieces of advice and one really important thing is to understand that 'personal demons' are just a part of writing and they will always be there telling you that your book is really bad and that you will never finish it and if you do finish it, it will be terrible. They will tell you that you will never achieve the dream that you have in your head, for the book. I think that you need to accept that the 'demons' will be sitting with you, as you write the book and that you will listen to them but I will not let them make my decisions, for me and not let them stop me from writing. It becomes a little bit easier to keep the faith as you write if you let them sit in the chair, next to you, but not actually affect what you do.