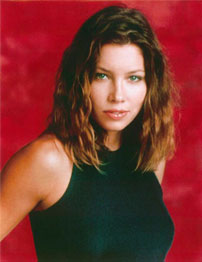 Jessica Biel insists that she's not just a pretty face.

Jessica Biel, who rose to fame in the family-friendly TV show Seventh Heaven, is all grown up, a wiser and more mature presence these days. As the heroine and sole survivor of the very gory remake of Texas Chainsaw Massacre, Biel admits to being a fan of classic horror. "I love films like The Shining, Carrie and The Changeling," especially with their lack of extraneous blood and violence. Sitting in a New York hotel room, the 22-year old beauty admits to not having yet seen her latest movie, the remake of the classic 70s thriller The Texas Chainsaw Massacre, which is why she insists that "there's a lot of brutality and violence, but --- not so much gore." She is surprised when told that very young children were seen at the pre-junket screening of the film, and yet genuinely feels that while making it, violence was never a concern. "It never occurred to me that we were making such a violent movie or that it is going to make young people want to be more violent. It might sound weird, but I just never thought about that. I don't think it's violent, but it could have been a lot worse", she says. Yet in preparing for the physically challenging film, which includes sequences with meat hooks and chainsaws, Biel's approach was unique. "What I did everyday was just substitute my brother into all these people. I don't mean I want to put him on the meat hook," she hastily adds. "It's him and the situation that would probably make me the most fearful that he would be gone from me from this earth and that was really helpful to make the scenes very real for me. I needed to believe that I was running away from a madman and it's my job in this life to save my brother because I'm his only hope. So I used him because I love him so much and he makes me cry," Biel says.

It was important then for the actress not to create a cliched, screaming damsel in distress, knowing full well that she can be a role model for young women. "I mean, this character is not a wench, nor a pushover, but she's smart, strong and assertive." Nor doers she believe she comes across as overly sexy as one suggests. "I haven't seen the movie, but I took every precaution on the planet to make it not about being sexy. I didn't go through this movie going, okay, 'I run like this' Then I'm sexy and strong. I never ever once thought: How is this going to make me sexy? To me it was how I am going to make this real and how am I going to make this scary? How am I going to make women watch this movie and not go, oh God, another girl running around in her little bra, panties and thong tripping and running through the door?" 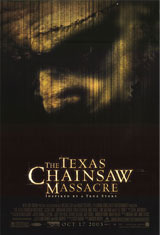 Yet, despite her often defensive protestations, Biel is beautiful and sexy, denying that being labelled a sex symbol somehow enhances her appeal at the box office. "I don't really know if it enhances it or not. I mean, I don't know if it does. It is not in my plan or my life to be a sex symbol," says the insistent actress. "You are who you are and you can't help what you look like, so I would prefer to downplay it the sex appeal because there's so much stuff all over the place and I really wanted this movie to be scary and real and not about protruded breast shots." Inevitably the conversation switches gear - literally, to her infamous semi-nude photo shoot that appeared in soft-porn Gear Magazine three years ago. Then a rising teenage star thanks to the family-oriented Seventh Heaven, the photo shoot seemed to be a deliberate ploy on Biel's part to change her image so as not to be typecast as the good girl next door. Not true, says a defiant Biel who, three years later, remains clearly bitter over that experience. "I want to say that because I was 17 years old, it was my first adult photo shoot. It was supposed to be sexy and fun and not at all naked." Biel says "It was just supposed to be underwear, but I got in a situation where I was encouraged and I was not looked after by the people I was working with." Biel adds that getting older would have enabled her to make the segue into more adult roles, not a naked photo shoot. "I think that change of image was going to happen naturally. You get older, you look and act differently, your ideas are different and every year you change so much, so when that photo shoot came out it was really horrible for me." Yet, the older but wiser Biel has no regrets, "because I've learned about being able to stand up for myself and say: You know what, no, I'm not going to wear that? I was working with a lot of men, who were my managers which wasn't a good thing for me. I really needed to be surrounded by a woman or women who would just say, that's really not the smartest idea." Biel says that degree of exploitation is not uncommon in Hollywood. "I think this happens to so many girls and it's not a bad sob story. I'm not looking for people to go, oh. I mean this was one of the hardest times I went through my whole entire life. I really embarrassed my family, I embarrassed myself. Thank God for 7th Heaven, the fans and Aaron Spelling who was so forgiving. But the reality is, when your 17 years old, you think you know everything, you want to be 25," Biel says laughingly. "You want to wear the sexy clothes and someone says, yeah, that looks great, why don't you just lift that up?"

Biel says that today, no more sleazy magazine photo shoots. "I'll only do a photo shoot for a magazine that I think is reputable." In the meantime, the beautiful actress has to try and set herself apart from all of the other beautiful young women trying to make a name for themselves in Hollywood, about which Biel remains philosophical. Sometimes, you just feel like you're one of many, but I guess I feel different because I had such an awesome childhood, I have such awesome parents, such a great family that if it were to end tomorrow, I would never change in their eyes. I would never change and they wouldn't care." Biel hopes to return to college to complete her studies, because "it's really, really important for me personally. I want that degree, to go to classes and feel, after a semester's done, that I could find myself talking to my parents about all this stuff I didn't know anything about and I'm just rattling it off, feeling very confident and smart so I can talk to anybody about so many different subjects." But she still has time to kick plenty of butts, on screen at least. Biel is wrapping up the final in the Blade franchise. "I play Abigail Whistler, Kris Kristofferson's daughter and basically, I've been training in secret with a team of vampire hunters, including Ryan Reynolds, because Blade is in a situation where he needs help, so my team basically bails him out and says: Surprise." From a chainsaw to a blade, there may be a pattern to the born again, but reluctantly sexy, Biel.