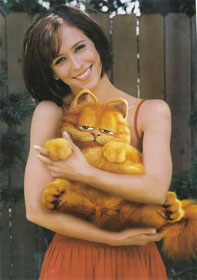 NO LOVE FOR HEWITT BUT STILL TRYING.

Jennifer Love Hewitt was in a playful mood while promoting the part liveaction, part CGI comedy Garfield, in which she plays a love-struckveterinarian. No stretch for the beautiful starlet, who, like her characterin the film, has been known to be the one asking the nervous guy out on adate. "I, in the process of dating, probably do more of the asking out thangetting asked, because guys do not ask anymore, which is a horrible thing,"she says laughingly.

Hewitt says she has her own theory on this facet of human behaviour. "I think guys are really nervous, and honestly, maybe somehow we've taken the female empowerment thing a little bit too far, and allowed guys to think that we don't want to be girls," Hewitt explains. "There's a difference between wanting to berespected and being a strong female and being known for being able to dothings, but still very much wanting guys to open the door, wanting them toask us out, still bringing flowers and stuff like that. It was actually oneof my guy friends who was the one that brought that to my attention. So Ithink honestly it's because guys are at a loss at this point."

Hewitt denies that her fame is a stumbling block to being asked out. "Idon't really consider myself famous, so I hope not, because if so, there aremany more, famous people that they can be nervous about than me. I don'tthink that's part of it."

When Hewitt is busy not thinking about her love life, or lack thereof, sheis developing her movie career, such as the female lead in the kid-friendlyGarfield, based on the classic comic book. Working with both a plethora oflive animals and a CGI lead character, is partly what drew her to thisproject." I really wanted to see how the whole process would work, and Ireally wanted to be a part of a movie where kids could go, throw candy andpopcorn at the screen, and yell at Garfield for being mean to Odie. So I'mexcited to actually get to see it for the first time." Asked if she was afan of the original comic, Hewitt says "I've only read the comics that werein the papers, but I was a fan of the cartoon, in school, on Saturdaymornings with my friends."

Playing with cinematic cats and dogs aside, Hewitt remains single and stillsearching for love. "I'm a hopeless romantic, and very much the person in arelationship to go: If things are going well, I'll buy the flowers, rememberthe dates of things, plan fun nights out, and then if they don't really wantto be with me or it doesn't work out, then I'm like, 'I've done everythingpossible.' So I think lately in my dating life I have been much subdued andtried not to do as much of that, which has left me without a lot of datingrecently. I would rather the next guy that I go out with, whenever that'sgoing to be, contrary to what they write in the tabloids, kind of come to meand say, 'Would you like to go out with me?' Do that thing, so I'm kind ofwaiting, I'm not going out there and doing the things I used to do."

And she is not necessarily ruling out dating a fellow actor. "I think youkind of have to go with your heart. If it's a doctor, great, if it's anactor, fabulous, if he's a plumber even better. Whatever it is. If hematches with you and makes you happy, that's great. I've dated some actorsthat you probably never want to go out with, but that's not because they'reactors, but because we didn't connect."

Next up professionally for Ms Hewitt is a movie she just completed "outsideof London called 'The Truth About Love' which is a romantic comedy, kind oflike 'Four Weddings and a Funeral' meets 'Bridget Jones' Diary'. I play anEnglish girl and it's with Dougray Scott] and Jimi Mistry." Then it is offto Budapest for the new TV miniseries, 'Musical Christmas Carol' with KelseyGrammar, Jason Alexander and Jane Krakowski. "I'm playing Emily, Ebenezer'sfirst love and I have three scenes in the movie."